A Boston College School of Social Work initiative launching this fall will address the mental health and well-being of millions of people affected by violence and upheaval in Colombia and neighboring Venezuela.

Supported by a $1.5 million grant from the Conrad N. Hilton Foundation, BCSSW researchers will culturally adapt and pilot-test two trauma-informed, evidence-based interventions—practices or programs that been proven effective through outcome evaluations. These will help serve the needs of some of the more than 8.1 million internally displaced persons  (IDPs) officially recognized as victims of the five-decade conflict in Colombia, as well as the approximately 1.8 million Venezuelans who fled to Colombia to escape their country’s economic devastation, violence, and political repression.

“Both populations suffer from many layers of trauma related to forced migration, family separation, and exposure to violence,” according to a project summary authored by Assistant Professor Maria Piñeros-Leaño and Alethea Desrosiers, who has since left the University after working at BCSSW for five years. “These life disruptions have limited their access to education, health care, and employment opportunities.” 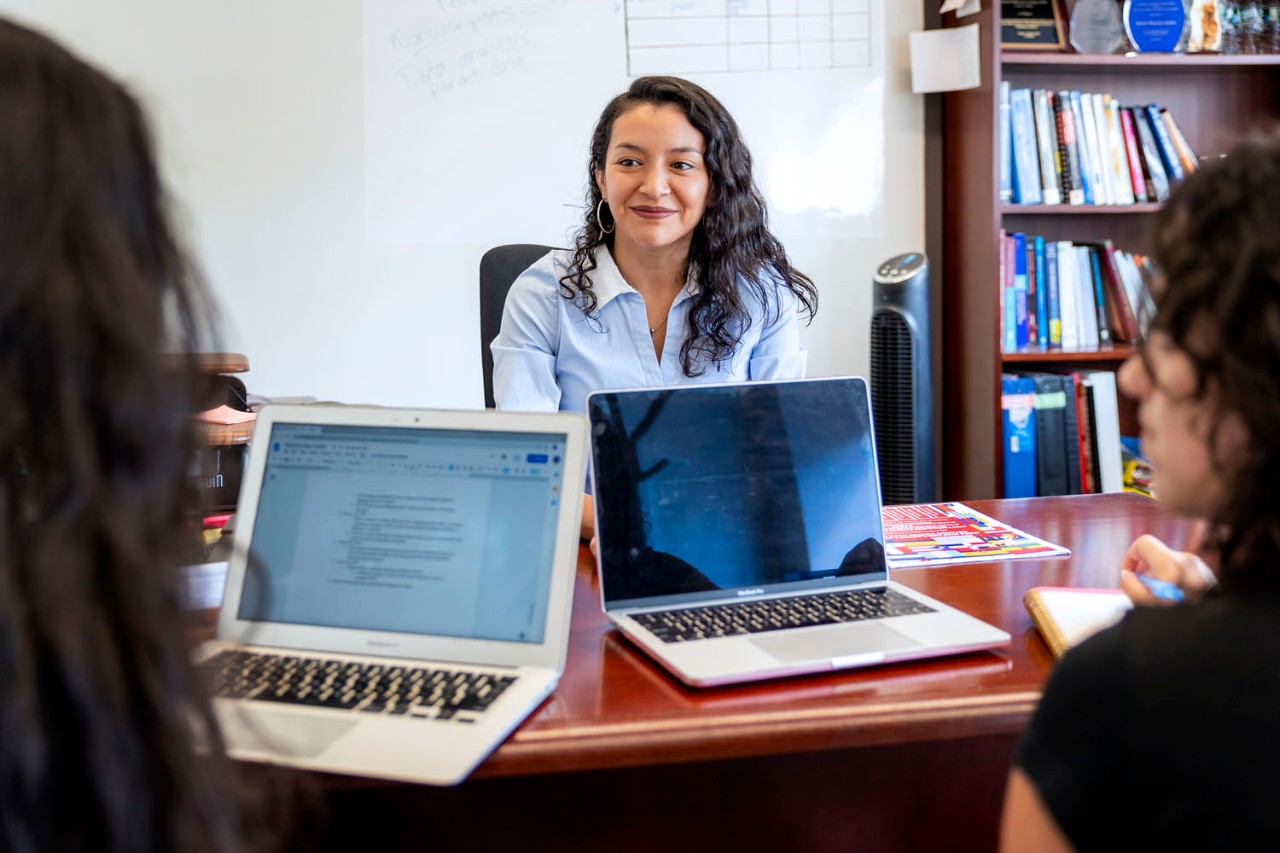 “This is an example of the global dimension of social work, and its role in resolving societal problems on a major scale,” says Maria Piñeros-Leaño (above) of the BC School of Social Work project, which will adapt and pilot two programs designed to aid people affected by violence and upheaval in Colombia and Venezuela. (Caitlin Cunningham)

The Family Strengthening Intervention for Early Childhood Development will focus on Venezuelan migrant families with children under three years of age, while the Youth Readiness Intervention will be tailored to Colombian IDPs and Venezuelan migrant youth between the ages of 18 and 30. Both were developed by BCSSW Salem Professor in Global Practice Theresa Betancourt, director of the school’s Research Program on Children and Adversity, while she was at Harvard University. Betancourt is renowned for her work with war-affected youth in Rwanda, Uganda, Ethiopia, and Sierra Leone, and with refugees in Boston and around the world; she and BCSSW Assistant Professor of the Practice Indrani Saran will be co-investigators for the project in Colombia.

The interventions are intended to bridge gaps in the policies and outreach efforts Colombia has implemented to aid IDPs and Venezuelan migrants, said Piñeros-Leaño and Desrosiers, but first they must go through a rigorous cultural adaptation to be effective. The BCSSW team will use an eight-step model to culturally adapt the FSI-ECD and YRI without changing their core elements or theoretical underpinnings. A vital component of the adaptation, the researchers note, is engagement with the communities being served: A feasibility study involving 40 Venezuelan migrant families with at least one child three years old or younger will be conducted as part of the FSI-ECD program, with an emphasis on assessing parental mental health, parent-child interactions, parenting practices, and household violence.

“This is an example of the global dimension of social work, and its role in resolving societal problems on a major scale. With crisis situations such as those in Colombia, there is often a tendency for the public or the media to focus on the most immediate concerns, like housing, medical, and food-related issues. But gauging the impact and extent of trauma on individuals and families, and their longer-term needs, is equally critical.”

The YRI adaptation for Colombian IDPs was completed during a prior pilot study in collaboration with the Bogota Mayor’s Office and Foundation Compaz, a Colombian NGO. The BCSSW team will now conduct a larger trial of the culturally adapted YRI, integrated within entrepreneurship training programs for Colombian IDP and Venezuelan migrant youth, which will assess effects on emotion regulation, self-efficacy, depression, anxiety, post-traumatic stress, and interpersonal violence.

“This is an example of the global dimension of social work, and its role in resolving societal problems on a major scale,” said Piñeros-Leaño. “With crisis situations such as those in Colombia, there is often a tendency for the public or the media to focus on the most immediate concerns, like housing, medical, and food-related issues. But gauging the impact and extent of trauma on individuals and families, and their longer-term needs, is equally critical.”

Desrosiers added, “One of the key aspects of these interventions is that they can be implemented by community health workers or others without an advanced level of professional certification. So, the FSI-ECD and YRI can become part of the resources that Colombian human and social services provide.”

The adaptability of interventions makes them potentially scalable in other settings, said Piñeros-Leaño and Desrosiers, noting that they and BCSSW colleagues have held initial discussions about the possibility of introducing such initiatives in Mexico, El Salvador, and Guatemala, countries that also have experienced severe conflict.

The project in Colombia will draw logistical support from BCSSW’s Center for Social Intervention, said Piñeros-Leaño and Desrosiers, who added that they hope to provide opportunities for BC undergraduates—such as those enrolled in the interdisciplinary Global Public Health program or pursuing an independent major—to serve as research assistants.