The story of Wilmer Garcia, his wrongful deportation, and the Boston College program that helped him fight it

For Honduran-born Wilmer Garcia, a wrongfully deported legal permanent resident, an arduous and contentious return to the United States was finally achieved in May 2018 after an eight-year legal struggle and 13 years of exile.

At a celebration this semester at Boston College Law School, Garcia re-stated his appreciation for his legal team from the University's Post-Deportation Human Rights Project and Boston law firm Nixon Peabody: “I am beyond extremely grateful with you all; you saved my life and family.” Also at the event, Nixon Peabody was presented with the first “Human Rights in Action” award for the firm’s pro bono contribution to the landmark legal victory.

“This case illustrates that post-deportation victories are indeed possible with hard work, persistence, and innovative legal strategies,” said BC Law Professor Daniel Kanstroom, co-founder and co-director of the PDHRP at BC’s Center for Human Rights and International Justice, which he also co-directs. “We are here to celebrate a very difficult legal victory that was in many ways against all odds. We also celebrate some joy and satisfaction in striking a meaningful blow against a large, unjust system that has taken root in our country for more than a quarter century. And we celebrate this very special man, a person of great courage and optimism with a deep commitment to justice and his family, and an indomitable human spirit.” 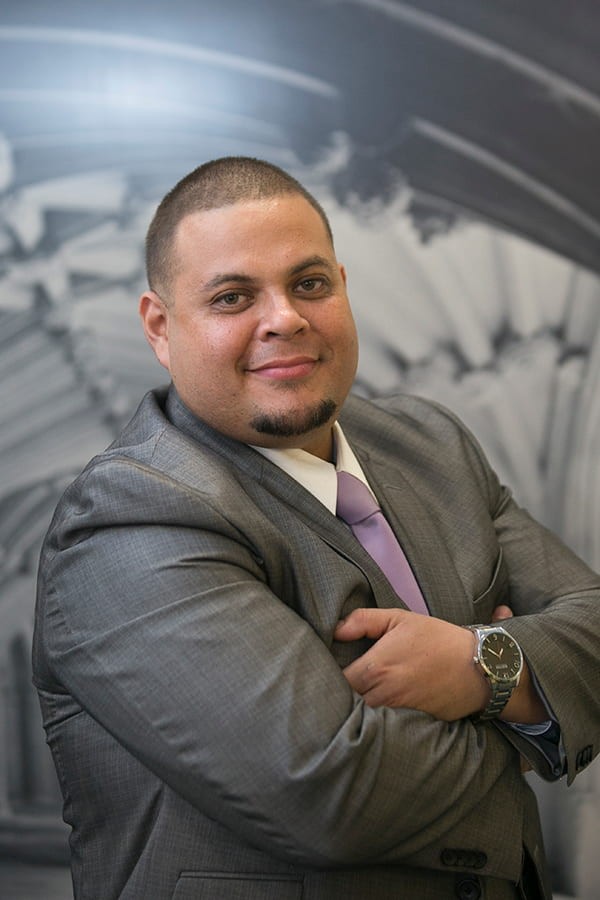 In 1993, when he was 10 years old, Garcia legally immigrated to Louisiana from Honduras, but was deported to his native country in 2005 based on a mistaken interpretation of the removal statute. Convicted of a simple controlled substance possession charge under Louisiana state law in 2002, he paid a fine, served probation, and obtained a first-offender pardon, but before the pardon was executed, he was arrested by Immigration and Customs Enforcement (ICE) agents and entered into removal proceedings.

He served time in five detention centers in as many months, and his immigration file was destroyed by Hurricane Katrina. Deemed deportable as an aggravated felon by a Louisiana immigration judge, and advised by his prior legal counsel that he had no basis for an appeal, Garcia, by then 22, was returned to Honduras, a country he barely knew.

“I didn’t know where to go,” explained Garcia, describing his arrival in Tegucigalpa, the Honduran capital. “I was by myself; I had just a few bucks in my pocket. I barely knew how to speak Spanish.”

Always striving to find a way back to the U.S., Garcia, through online research, discovered a 2006 Supreme Court decision, Lopez v. Gonzalez, which stated that a simple drug possession was not an “aggravated felony” under immigration statutes. It was a bolt of legal lightning: He had been erroneously deported. There were two telephone numbers at the bottom of the law article; he reached the second—the National Immigration Project—which referred him to the PDHRP.

“This [was] a very clear case of a wrongful deportation pursuant to a wrongful interpretation of the law,” said Jessica Chicco, PDHRP’s supervising attorney, in a 2012 BC Law Magazine article. She further clarified that Garcia should have been allowed to make a case to the immigration judge as to why he should be permitted to remain in the U.S. As Chicco noted then, “Rather than be bound by an ironclad rule—aggravated felony equals deportation—the judge should have determined Garcia’s fate based on fairness and circumstance.”

PDHRP, founded to address the harsh effects of U.S. deportation policies, partnered with Nixon Peabody to attempt to re-open Garcia’s immigration case. Following a long, frustrating, and complex ordeal before several immigration judges, many panels of the Board of Immigration Appeals, and the U.S. Court of Appeals for the Fifth Circuit, his case was re-opened. In early 2018, the BC-Nixon Peabody team secured Garcia’s return to the U.S. for immigration detention so he could appear in court before an immigration judge who would apply the proper legal standard.

On May 7, 2018, the immigration judge granted cancellation of removal, the government waived its right to appeal, and Garcia—now 36—was released with his rights as a legal permanent resident fully restored, and he resumed his life with his family in the U.S.

“We still don’t know what swayed the judge,” said immigration lawyer and PDHRP attorney Heather Friedman during the panel discussion. “It may have been the sheer bulk of the case files, which was huge.”

“He has endured deep injustice and unfairness, harsh detention, the deep pain of family separation, and many years of unlawful banishment to Honduras,” said Kanstroom, the Thomas F. Carney Distinguished Scholar and faculty director of the Rappaport Center for Law and Public Policy. “As we gather here tonight, tens of thousands of people are still in immigration detention in this country, facing deportation. They are caught in a system that I have described as a radical social experiment that is unprecedented in history and unique among constitutional democracies in its disregard of basic fairness, family ties, proportionality, and respect for human dignity.

Learn more about the effort to bring Garcia home here.