Evans, who earned bachelor’s and master’s degrees from BC, was present for the December 11 opening of the first civil rights and labor museum dedicated to African Americans in Gulfport, Miss., for which he has been a driving force. The museum is located in the historic settlement of Turkey Creek, Evans’ hometown.

For more than 10 years, Evans, his relatives, and neighbors fought powerful corporate interests and politicians, and withstood the dual devastation of Hurricane Katrina and the pollution of the BP Deepwater Horizon oil spill. Their intent was not only to preserve structures and artifacts of a community established in 1866 by emancipated African Americans, but to achieve self-determination and environmental justice. 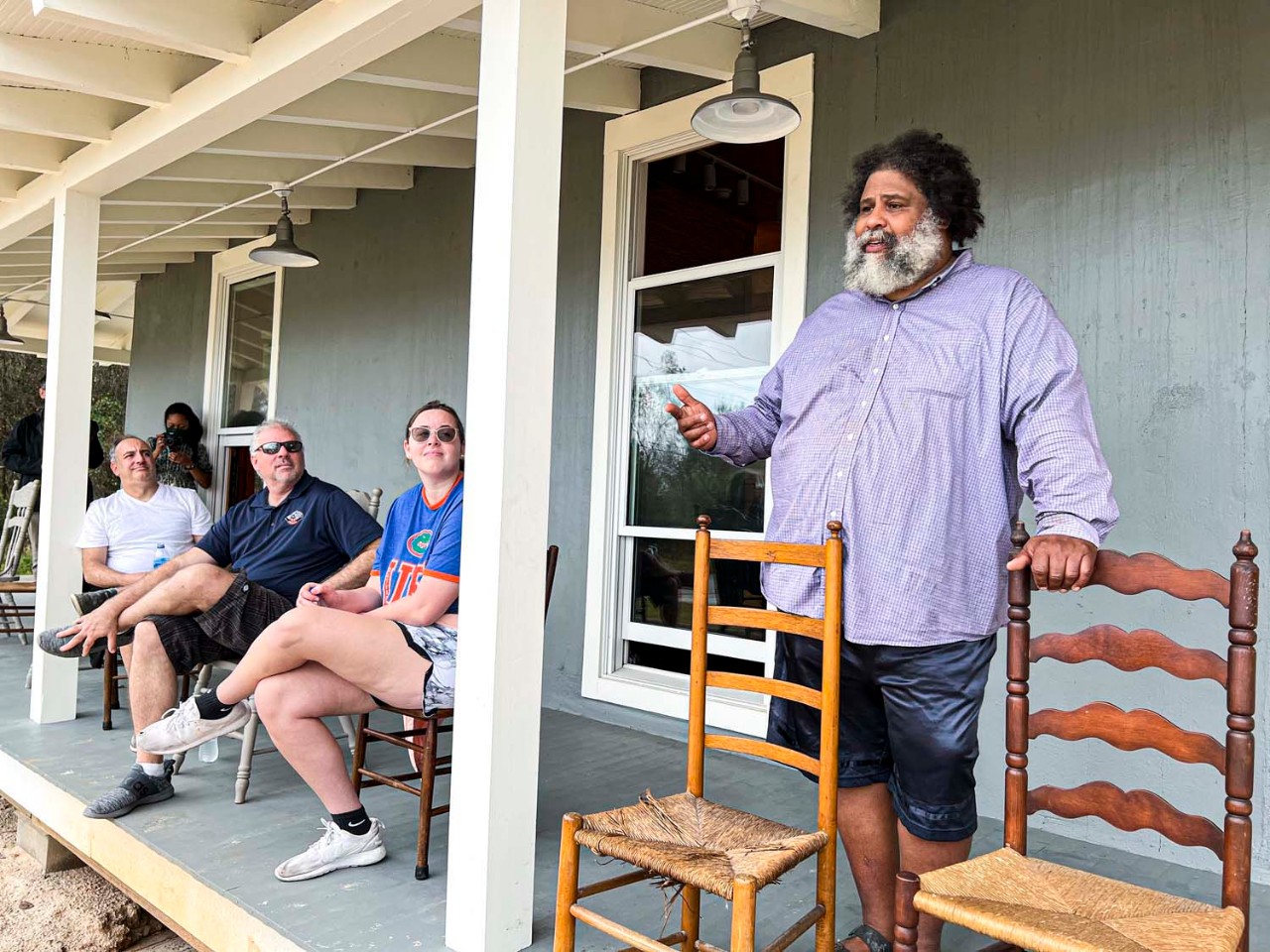 Evans’ indefatigable efforts to protect the historic district and ecologically sensitive estuary were depicted in the documentary “Come Hell or High Water: The Battle for Turkey Creek,” by filmmaker Leah Mahan, which won the Audience Award for Documentary Feature when it premiered at the New Orleans Film Festival in October 2013.

His involvement in the salvation of Turkey Creek is one of many examples of Evans’ dedication to justice as an educator, historian, and activist.

At BC, he was a charter member of the Charles F. Donovan Urban Teaching Scholars program, which prepares K–12 teachers in urban schools through a curriculum that prioritizes critical inquiry, social justice education, and community building. He taught American history and social studies at the Phillis Wheatley Middle School in Roxbury for 10 years, and undergraduate history, social sciences, and humanities courses at Roxbury Community College and Harvard University’s Radcliffe College. He lived on Roxbury’s historic and closely knit Wakullah Street, owns property there today, and rents or shares his residences with former “Donovans”—the nickname for members and alumni of the Donovan Scholars program, housed in the Lynch School of Education and Human Development.

In 1997, he and a coalition of educators, Episcopal clergy, and community activists founded the independent, Dorchester-based Epiphany School in response to a critical need for a high-quality, full-service, and tuition-free middle school targeting Boston’s most economically disadvantaged families.

As an adjunct faculty member at BC from 1992 to 2005, Evans taught United States civil rights history, using “Eyes on the Prize,” the award-winning PBS documentary that recounts the fight to end decades of discrimination and segregation, as his primary teaching tool.

Motivated by the desire to conserve and restore the culture, ecology, and self-determination of his ancestral community and watershed, Evans founded Turkey Creek Community Initiatives in 2003—a decision that would prove prescient two years later. 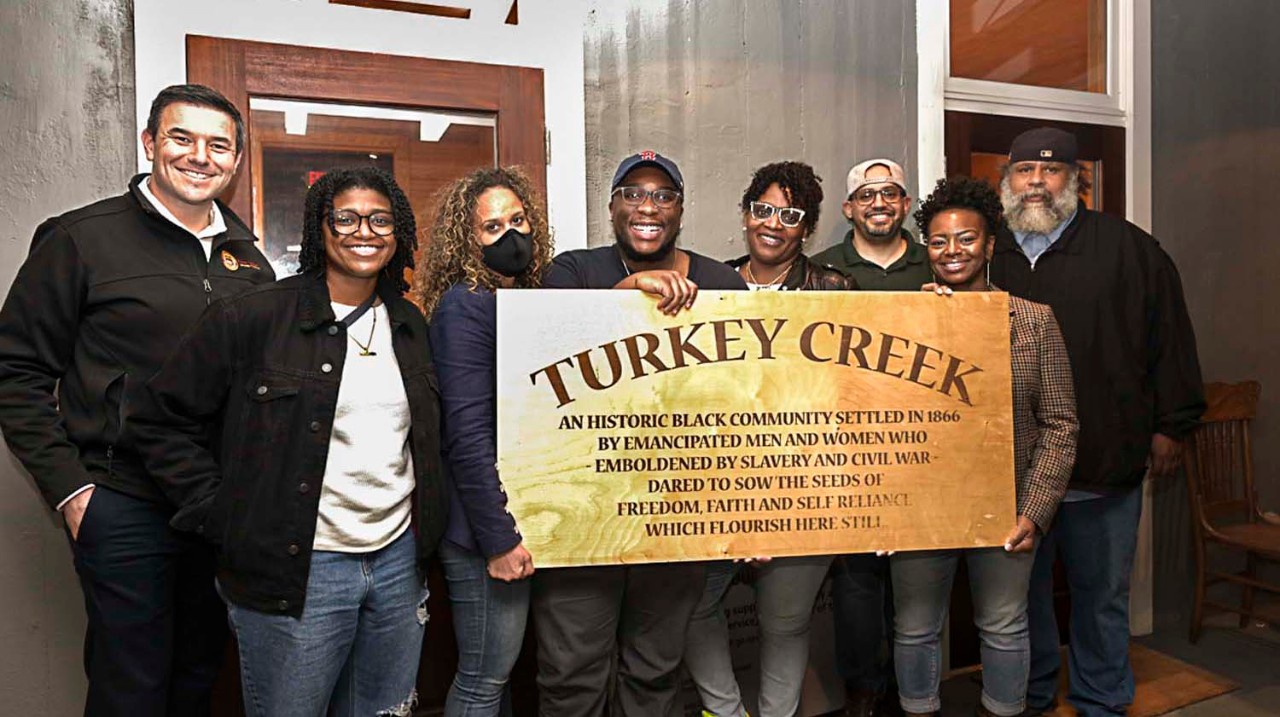 After Hurricane Katrina hit in August of 2005, Evans eschewed his fall semester teaching plans and instead organized an emergency supply run to his hometown. Leading a convoy of three 26-foot trucks filled with gallons of water, barrels of gasoline, canned food, building materials, and generators, Evans and four BC students (including two Donovan Scholars) distributed supplies to his relatives and neighbors, including his 70-year-old mother, after arriving in the flooded, storm-torn coastal plain. That fall, Turkey Creek Community Initiatives began to coordinate much of the ongoing relief work to achieve an equitable, multi-sector recovery across the Gulf Coast.

One year later, he bought an abandoned, dilapidated, and termite-infested dwelling in the neighborhood for $10,000.  At the time, he didn’t realize that he now owned the former paymaster’s office for what was the last relic of the area’s once-booming forest industries, which included sawmills, and creosote and turpentine factories.

“I knew it had to be historic,” Evans told the Biloxi, Miss., Sun Herald.  “Most people would’ve torn it down. I didn’t.”

In 1909, Ohioan Homer Yaryan, inventor of a process to extract turpentine and rosin from pine stumps and wood knots, chose the Gulfport area for his operation because of its bountiful pine supply, and its rail and water accessibility. The plant—often referred to by locals as “the knot plant” or “the Yaryan”—offered steady, albeit dangerous employment for local Black laborers, eager to find work. The company was later sold and the plant renamed Phoenix Naval Stores.

A 1943 plant explosion killed 11 workers, including nine African American men from the Turkey Creek area; only the paymaster’s office survived because of its fire-resistant concrete outer walls and roof. Evans recently discovered that coincidently, his great-grandfather had acquired and then moved the heavy building a few hundred yards from its original location to the parcel he now owned.

Gulfport twice condemned the paymaster’s office following Evans’s purchase, and he considered tearing it down, but once he understood the building’s history, and how it symbolized the exploitation of the environment, and African American workers locally and nationally, he led the restoration campaign.

“It was almost predestined that what has happened would happen,” said Evans in an interview with the Sun Herald.  “God’s hand was in it.”

During the Katrina recovery, architectural historians, structural engineers, and federal agency representatives concluded that Turkey Creek’s rich history and environmental resources were endangered by both neglect and Gulfport’s development priorities following its annexation in 1994. This realization was no surprise to Evans, who had been a relentless advocate for Turkey Creek’s preservation, a community three decades older than the rapidly encroaching city.

In 2007, Turkey Creek was named to the National Register of Historic Places, and eight years later, the paymaster’s office was listed as one of the state’s “10 Most Endangered Historical Places” by the Mississippi Heritage Trust. In 2018, a $500,000 African American Civil Rights grant to the Land Trust for the Mississippi Coastal Plain via the National Park Service, funded the restoration of the iconic old building, overseen by Evans and the community that considers it emblematic of their kinship, pride, tenacity, and future.

The Yaryan-Phoenix Museum—as it is formally known—is TCCI’s physical home and a repository for the history of the Black workers who toiled in Mississippi’s forest industries at low pay and great risk.  Like a mini-monument, it serves as a witness to the perseverance of African Americans who survived slavery and Jim Crow segregation, forever anchoring a community that can trace its lineage to five family surnames, one of which is Evans.

Ever the historian, Evans noted during the December 11 ceremony how fitting it was that the paymaster’s office, with its once segregated entrances and ownership by a company named Phoenix, has risen from the proverbial ashes like the mythical bird symbolizing renewal and rebirth.

The director of TCCI, Evans is a managing advisor to the Gulf Coast Fund for Community Renewal and Ecological Health and co-founder of Bridge the Gulf, a community media project to elevate the voices of Gulf Coast communities striving for justice and sustainability.  Nonetheless, he remains inextricably connected to Boston, fighting gentrification and stewarding the Wakullah Street community.

His Boston, and BC, connections were evident at the ceremony. Among those attending were Lynch School associate deans David M. Goodman and Yasmin Nunez ’97; Ashana Hurd ’03, Lynch School assistant dean and former Donovan Scholar; current Donovan Scholars Nyree Smith ’22 and Seraj Sidibe ’22; Eva Hickman-Maynard ’97, former assistant director of affinity programs at BC and a former Epiphany School trustee; and Carol Hurd Green, an associate dean in the College of Arts and Sciences while Evans was an undergrad there and former director of the Donovan Scholars program.

“It is so rare to see courage in action,” said Goodman, reflecting on the event. “It takes extraordinary strength and love to carve out an ethical and responsive way of living in community. We witnessed this very thing in Turkey Creek and it was an exceptionally moving experience. Derrick’s work makes us proud and inspires.”

“One of the Donovan Scholars program’s core values is uplifting and transforming our community,” said Hurd. “We talk a lot about the importance of using one’s knowledge, not just for one’s gain, but rather harnessing it to better and uplift the community. Derrick Evans is a living example of what we value.”