Throughout his education and his career in academia, Ciaran O’Neill has perused great historical tomes, canonical works of literature, and numerous academic journals. But the current focus of his scholarly attention is a personal diary from 1840s Dublin which chronicles an illicit love affair.

The diary kept by Trinity College Dublin law student James Christopher Fitzgerald Kenney, and what it reveals about love, class, courtship, and moral conduct, will be the subject of a lecture on Nov. 6 by O’Neill, who is the Burns Visiting Scholar in Irish Studies this semester. The Burns Scholar Lecture will be held from 4:30-6:30 p.m. in the Burns Library’s Thompson Room, and is free and open to the public.

A collaboration between the Boston College Center for Irish Programs and University Libraries, the Burns Visiting Scholar in Irish Studies program brings to campus distinguished academics, writers, artists, journalists, librarians, and notable public figures who have made significant contributions to Irish cultural and intellectual life. Burns Scholars teach courses, offer public lectures, and use the resources of the John J. Burns Library in their ongoing research, writing, and creative endeavors. O’Neill also will co-organize a daylong symposium on history and fiction on Dec. 1 in Connolly House [details will be available via www.bc.edu/irish.html]. 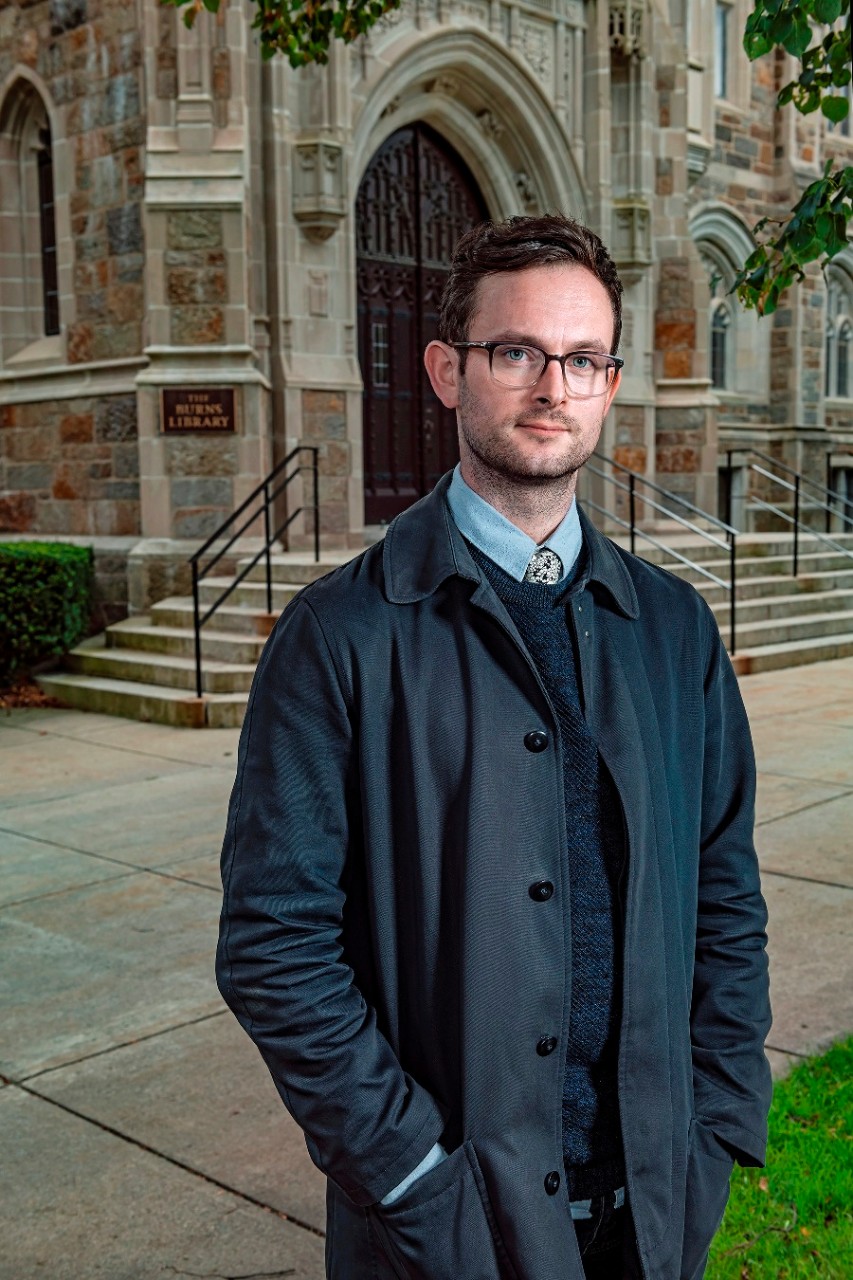 For O’Neill, who has been the Ussher Lecturer in History at Trinity College Dublin since 2011, spending the fall at BC represented an opportunity to reconnect with friends and acquaintances like Center for Irish Programs/Irish Studies Program Director James H. Murphy, C.M., Associate Professor of English James Smith, and Professor of History Oliver Rafferty, S.J., to become more familiar with a university where he gave a talk three years ago—and to enjoy the wealth of holdings at Burns Library. He is utilizing Burns’ resources for a book about social and political power and its dynamics in Ireland.

“There is so much material at Burns I wanted to get my hands on,” said O’Neill, a native of County Laois, some 50 miles southwest of Dublin. “If you love teaching, which I do, you have to make the most of any opportunity to do research, because it feeds and enriches your interests and ultimately makes you a better teacher.”

As a scholar with research interests rooted in 19th-century Ireland, O’Neill views the Kenney diary—which has been preserved and digitized at Trinity College—as a window unto a time when Ireland’s status as part of the British Empire seemed to simultaneously mask and amplify the complexity of its social relationships and mores. Part of the diary’s significance lies in the fact that Kenney was an elite Catholic, who represent a largely unexplored chapter in Irish history, explained O’Neill, who is collaborating on a study of the diary with Juliana Adelman of Dublin City University.

“Not much has written about the Catholic elite,” said O’Neill, whose 2014 book Catholics of Consequence: Transnational Education, Social Mobility and the Irish Catholic Elite, 1850-1900, won the James S. Donnelly Prize for History and the Social Sciences. “There is an assumption that those who were in positions of power and influence in pre-independent Ireland were defined by their non-Catholic status. But it’s possible to trace the Catholic elites from school, where they came together, and through the various networks and clusters they built up over time.”

An heir to his family’s fortune and a future magistrate, Kenney became involved with Mary Louisa McMahon, a woman of lower social stature about four years his senior—two critical elements that made the affair an unsavory one, said O’Neill. It was a potentially, but not equally, dangerous relationship for both: McMahon, an unmarried woman in her mid-20s (practically a spinster by the era’s standards) from a scandal-wracked family, risked her chance of redemption and respectability; Kenney risked his reputation.

“The power advantage is definitely on Kenney’s side, and even as he continues the relationship he keeps her at arm’s length; in his diary, he comes across as a somewhat unpleasant, emotionally diffident person,” said O’Neill.

An additional layer of complexity to the diary is that Kenney writes in a detached, novelistic manner, as if he and McMahon were characters in a story, O’Neill said.

“This diary offers many topics for reflection and discussion, about love, power, and consent, and the social structures in 19th-century Ireland. But there are other questions beyond history that can be considered: How does a researcher deal with this material—a personal diary—in an ethical manner? And how much do we trust the veracity of what the narrator is saying, especially if it’s written in this literary manner? The gender and social inequality glimpsed in the diary is all the more profound given that we know how Kenney’s life and career turned out, while Mary McMahon, as far as anyone can tell, just drops off the face of the earth.”

O’Neill enjoys such interdisciplinary inquiries, whether in his writing, teaching, or lectures: “Once, when I gave a presentation about the diary, half the audience decided that Mary was a figment of Kenney’s imagination, because it seemed so unlikely anyone would love him.”

Prior to Trinity College, O’Neill served as Irish Government Senior Scholar at Herford College, University of Oxford. He holds a degree from National University of Ireland Galway and a doctorate from the University of Liverpool.