The power of three

First-year nursing students Alexa, Jaclyn, and Kylie Russell are believed to be the first Boston College triplets to study in the same school with the same major 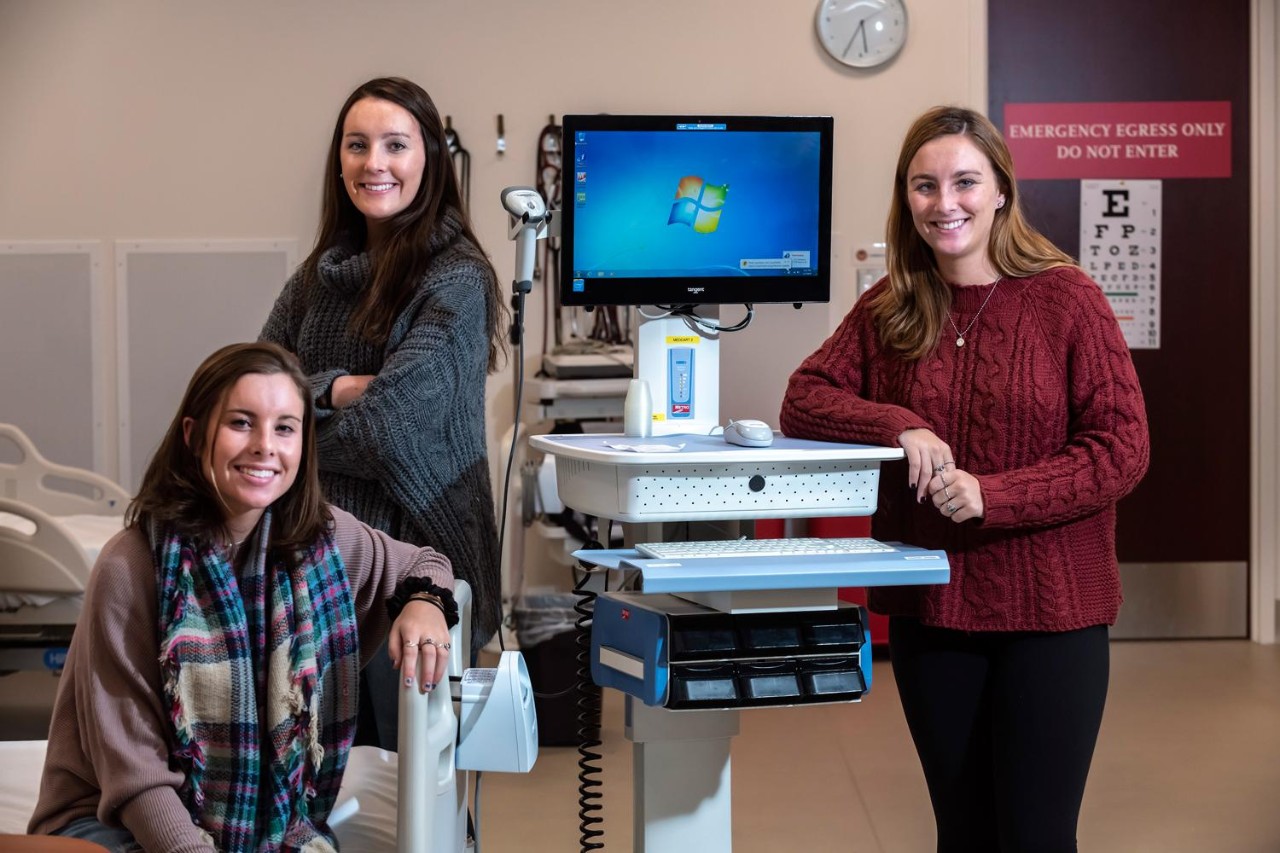 Ever since the Russell triplets—Boston College freshmen Alexa, Jaclyn, and Kylie—were little girls, their father would hold up three fingers and say, “Stick together.”

Today, the Connell School of Nursing students from Marshfield, Mass., are sticking together in a profound way.

They take two classes together, study together in O’Neill Library, play basketball together on an intramural team, and eat breakfast (Lyons), lunch (Eagle’s Nest), and dinner (McElroy) together most days.

To help their now empty-nester parents adjust to life at home without their three daughters, they meet mom and dad nearly every Thursday night for dinner—together—in a restaurant near campus.

Dad could not have scripted it any better.

Believed to be the first triplets at Boston College to study in the same school with the same major, the Russells have made quite an impression on the campus, excelling in the classroom and turning heads among classmates who can’t help but notice the energetic trio and admire the bond that exists between them.

“The first thing you notice when you are with them is how comfortable they are with one another,” said Jordan Wietrecki, a fellow first-year nursing student from Medfield, Mass. “They really care about each other. They are friends, not just sisters.  They are also three of the most genuine people I have ever met. I consider myself lucky to call them friends and to be studying nursing with them at BC.”

“We all applied to several colleges and universities, but BC was our first choice When we received our acceptances, we all said, ‘I’m going to go. I’m going to go too!’ Now that we’re all here, we can’t imagine being apart.”

The triplets say that growing up, they had always been interested in science and health care.  Their grandparents lived with them, and after their grandmother was involved in a car accident, she received nursing care at their home. Witnessing the visiting nurses firsthand piqued their interest in the field.

“We all did internships in high school that really sealed the deal,” said Jackie.

The siblings did not necessarily plan to go to college together, but they hoped to stay close to Boston to take advantage of its world-class hospitals.

“We all applied to several colleges and universities, but BC was our first choice,” said Kylie.  “When we received our acceptances, we all said, ‘I’m going to go.  I’m going to go too!’ Now that we’re all here, we can’t imagine being apart.”

Added Alexa, “We get along really well. We occasionally fight over little things, but we have always been close.”

Jackie says that while the siblings see each other every day, they each have their own roommate and friend group, and have developed individual bonds with the 105 first-year nursing students in what is now BC’s most selective undergraduate school.  “The nursing program is small, but BC is big enough that we can each find our own way.”

They have succeeded in doing just that.

Each lives in a different residence hall, and each has her own favorite spot on campus.  Kylie likes walking across Middle Campus: “It can be raining, it can be sunny, it can be snowing, and it still looks beautiful.” Alexa prefers the walkway between Stokes Hall North and South. Jackie enjoys the view of the reservoir and Boston skyline as she makes her way to the Rec Plex in the morning. Each has a different career plan for the future, with Alexa hoping to work in a maternity ward, Jackie in an intensive care unit, and Kylie most likely in oncology.

Each, friends say, also has her own personality.

“Jackie is super-motivated and is at the gym every day before class,” said Wietrecki. “Alexa is quiet at first but has a kind heart and is a really good friend. Kylie has high energy and is one of the funniest people I have ever met. She provides comic relief just when you need it most.”

For their parents, Kelley, a pre-school aide in Marshfield, and Paul, a captain in the Boston Police Department who works nearby in District 14 in Brighton, having all three of their daughters at BC has been a blessing.

“We are very proud of the girls,” said Paul. “They worked so hard in high school and their work has been rewarded. I tell them all of the time how much I love them, but they will never know how much I do until they have kids of their own.”

The Russell household had been one of constant motion with the two working parents juggling the schedules of three energetic and high-achieving teenagers who each played a different sport.

“They made it to every game,” marveled Jackie. “Dad would drive to games more than an hour away after a hard day’s work to see me play five minutes in basketball game. They were so supportive all of the time.”

The triplets recall their doting father telling them when they were little that he was going to go to college with them.  “Now,” said Alexa, “he is right down the street.”

Asked what it is like to have their father working as a Boston Police captain nearby, Kylie responds demurely, “We have not found out yet.”

They did, however, bump into their father unexpectedly one evening in Alumni Stadium when they and their fellow students stormed the field after a BC football game.  “Our father was working a detail and asking students to leave the field when we suddenly ran into him,” Jackie said. “He smiled and hugged us.”

“They are like sponges; they want to take it all in and learn everything. They have a strong work ethic, innate compassion, and a unique ability to draw you to them. They will be wonderful nurses.”

The triplets have found strong mentorship among BC faculty and administrators as well, especially with Eileen Sullivan, assistant director of the nursing laboratories in the Connell School, whom they first met at Accepted Students Day.

“I absolutely love them,” said Sullivan.  “They share core values of reliability and honesty, but they have their own personalities. Kylie does most of the talking, Alexa is more reserved, and Jackie is in the middle. But they are all so committed to each other. They are remarkable individuals from a truly loving family.”

The triplets have also won Sullivan’s respect for their hard work in the Brown Family Learning Lab in Maloney Hall, where they clean the simulation labs and prepare the supply carts for nursing classes.

“They have so much energy and enthusiasm,” said Sullivan. “They are like sponges; they want to take it all in and learn everything.  They have a strong work ethic, innate compassion, and a unique ability to draw you to them.  They will be wonderful nurses.”

The triplets, who have never spent more than a week apart, know that their “stick- togetherness” gives them a closeness that few will ever know, but that Boston College, with its myriad offerings, will give them opportunities to grow as individuals as they prepare for a career helping others.

“For us, BC has been the perfect place,” said Jackie.

“It is awesome and we couldn’t be happier,” said Alexa.

“It has all worked out so well,” said Kylie. “We could not have asked for anything more.”