Brazil native Lidia Carvalho came to the U.S. to learn English. Now, she's graduated from BC's Woods College as both an award winner and Commencement speaker.

Lidia Carvalho was 14 the first time she left home to pursue her education. In her tiny hometown in Brazil, the local school only served students through ninth grade, so she moved—by herself—to another town for high school. At age 25, she again struck out on her own, this time relocating to the United States to study English. She planned to stay for six months.

Instead, seven years later, Carvalho found herself seated in the front row at Boston College’s 146th Commencement ceremony this past May as the Prime Minister of Greece delivered the main address. When her name was called, she stepped onstage to accept the Woods College of Advancing Studies diploma on behalf of her class from University President William P. Leahy, S.J., an honor reserved for the winner of the Woods College Commencement Award.

“I felt like I was in a movie or something,” she recalled, “like it wasn’t actually me sitting there with all these amazing people. It was insane.”

Coincidentally, Carvalho’s first encounter with college life in the U.S. had come via a movie. When her English teacher in Brazil showed the class the comedy Legally Blonde, in which Reese Witherspoon’s character attends Harvard Law School, Carvalho was so enamored with the film that she watched it repeatedly. 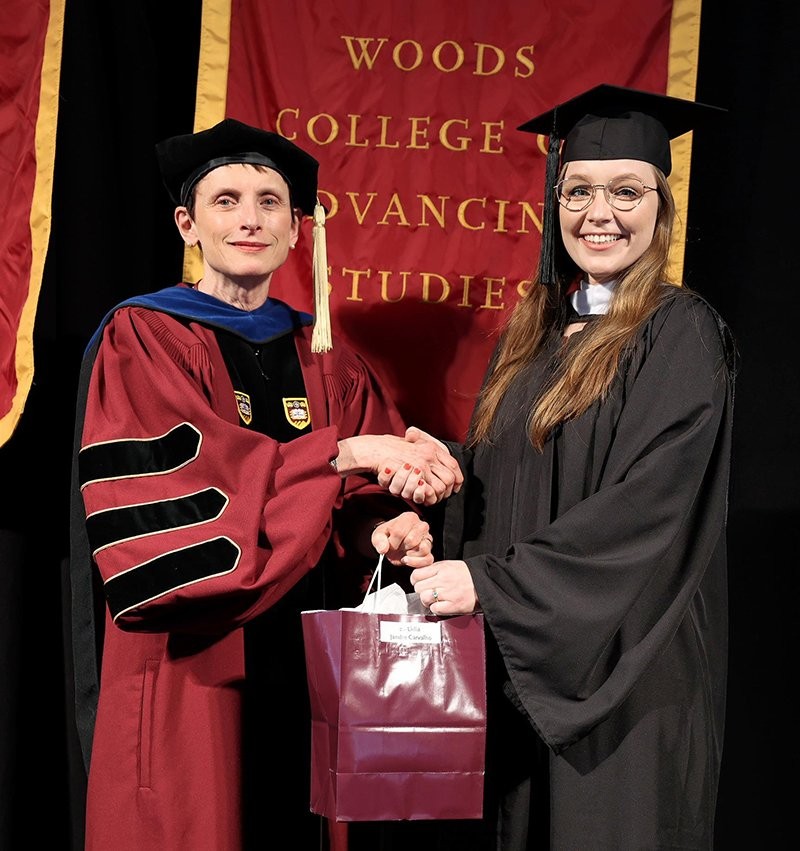 When Woods College Dean Karen Muncaster (left) invited Carvalho to speak at commencement, Carvalho was stunned. "I thought she had the wrong number."

Shortly after arriving in Boston in 2015, Carvalho realized that community college would be only slightly more expensive than ESL classes, so she enrolled at Bunker Hill, working remotely managing social media accounts and writing copy for companies back home to pay the tuition. The juggling act, balancing academics and work, was nothing new for her—as a college student in Brazil, Carvalho had worked multiple jobs to support herself, taking 10 years to earn a degree in economics.

“It was a very rough path,” she recalled. “We had a lot of family issues and personal issues. At one point I had to quit school altogether and work full time.”

When her Bunker Hill advisor suggested she transfer to a four-year college, Carvalho assumed the cost would be out of reach, but she attended a transfer fair, and stopped at the Woods College booth “to see what I was missing out on.” She soon realized that with a few more hours of remote work a week, a Boston College degree was, in fact, attainable. She applied, and when accepted immediately enrolled for the 2020 fall semester.

When she stepped on the BC campus for the first time, it was as if the collegiate set of Legally Blonde had come to life. “I get goosebumps just thinking about it,” she said. “Walking through those hallways, the Gothic architecture—it felt like a lifelong dream coming true.”

In her two years at Woods, Carvalho experienced both an academic and personal transformation. She excelled in her studies, taking courses in philosophy, ethics, and history, and earned both a bachelor’s degree in corporate systems and a certificate in finance. Through the school's Examined Life courses, she also recognized a growing desire within herself to be of service to others, both in her career and in her everyday actions. During that same time period, she continued working, got engaged, and gave birth to a son, Noah.

“When I look at us, Woods students, and the journey that led us here, I can say with conviction that the 'Ever to Excel' motto fits us perfectly. We will find the time, we will find the place, we will do whatever it takes, and we will excel.”

As undergraduate speaker for the Woods College Commencement ceremony, Carvalho focused  on another important part of her Woods experience—her classmates. She thanked the veterans in her class for helping her with oral communications, the small business owners for teaching her critical thinking, the older students for demonstrating organizational skills, and the traditional college-age students for teaching her how to better juggle work, family, and school.

“When I look at us, Woods students, and the journey that led us here, I can say with conviction that the 'Ever to Excel' motto fits us perfectly,” she said. “We will find the time, we will find the place, we will do whatever it takes, and we will excel.”

For her next move, Carvalho hopes to enroll in the Woods College M.S. in Leadership & Administration program. Someday, she plans to pursue a Ph.D., and to return to Brazil to teach others the lessons she has learned.

Her younger self would be proud, but not surprised, to see how far she’s come.

“I’m an ordinary person, and it’s possible for ordinary people to achieve great things,” she said. “With every challenge I just kept reminding myself that I’m not the first one and I’m not going to be the last one. Someone did it before me and they were successful, so why not me?”