Retired Boston College men’s hockey coach Jerry York ’67 will be among the honorees at the annual Boston Irish Honors luncheon on October 28 at Boston’s Seaport Hotel. 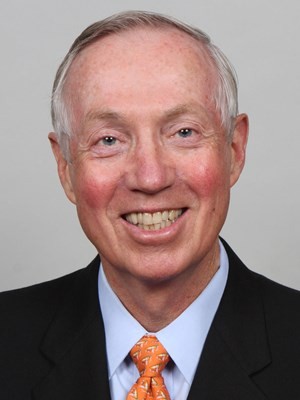 York retired last spring after 50 years as a Division I hockey coach, 28 of them at BC. He is the winningest coach in NCAA hockey history—his 1,123 wins include a record-setting 41 NCAA tournament victories—a five-time NCAA champion, and a member of the National Hockey League and U.S. Hockey halls of fame. York, who was the Schiller Family Head Hockey Coach at BC, cultivated a reputation as a caring mentor who supported his players during and after their time at BC. He coached four Hobey Baker Award winners (given to college hockey’s best player), 17 NHL first-round draft picks, 12 Stanley Cup champions, and scores of players who went on to successful careers in the NHL.  He also coached multiple Olympians and mentored dozens of individuals who went on to serve as NHL coaches, general managers, and presidents of hockey operations.

A star player at Boston College High School before coming to the Heights, York was named First-Team All-America in 1967 and won the Walter Brown Award for the top American-born player in New England that same year.  He scored 134 points as a player (84 goals, 70 assists) and led the Eagles to a 60-29 record, the 1965 Beanpot title, and a second-place finish in the 1965 NCAA Tournament.

Other honorees at the luncheon include Cronin Development President and CEO Jon Cronin and Mary Swanton, executive director of the Irish Pastoral Centre.