Jean Sullivan McKeigue N.C. '68, who as Boston College’s director of community affairs from 1988 to 2003 was at the forefront of efforts to build and maintain positive relations between the University and its host communities, died on February 4. She was 75. 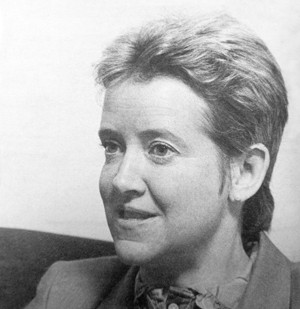 Ms. McKeigue was the primary liaison between BC and local neighborhoods, including municipal government offices, civic groups, and other agencies, and was involved in outreach programs and initiatives aimed at strengthening University ties with area residents.

It could be a demanding role. Ms. McKeigue’s job entailed fielding complaints about off-campus student behavior or parking-related issues, and taking part in discussions with area residents and officials concerned about University capital projects, notably the expansion of Alumni Stadium and a proposal to replace McElroy Commons with three interconnected structures that included a new humanities building and student center.

The Office of Community Affairs also administered the popular Read Aloud Program, which continues to send BC employees to read books to children at nearby elementary schools, and was a key partner in developing the University’s annual Arts Festival.

“There’s a meeting every night,” said Ms. McKeigue, offering insights on her job in an interview with Boston College Biweekly a few months after her arrival at BC, “and I am usually the BC representative. For the most part relations are quite cordial.”

Ms. McKeigue came to BC with a strong background in school-community relations, having served for four years—one as president—on the Boston School Committee. During her tenure, she negotiated with 13 unions, worked with community organizations to promote private and public collaboration with the public schools, initiated reforms and reorganizations, worked with state legislators and local community leaders in every neighborhood, and chaired the superintendent search committee. She also was a member of the Cultural Education Collaborative, the Citiwide Education Collaborative, the Comprehensive School-Aged Parenting Program, and School Volunteers for Boston.

In addition, she had taught in the Chicago public school system and worked with parent and community groups in Boston and New York City at the school and local district levels to improve parent involvement and educational services.

Prior to joining BC, she had been regional representative and corporate relations specialist for the National Alliance of Business, focusing on issues of financial resources stability, coordination of state employment and training services and the needs of at-risk youth.

Announcing her appointment as director of community affairs, University President J. Donald Monan, S.J., praised her “impressive ability to find common bonds among different groups of people, and to transform those bonds into beneficial programs of action. I believe that her skills will serve her well in the continuing, productive dialogue between Boston College and its neighboring communities.”

Ms. McKeigue also had personal and familial connections to the University, as a graduate of Newton College of the Sacred Heart—which was subsequently acquired by Boston College—and as the daughter of William “Billy” Sullivan Jr. ’37, a former publicity director for BC and founding owner of the Boston (later New England) Patriots; her brothers Patrick and Charles also graduated from BC.

In addition to a bachelor’s degree from Newton College of the Sacred Heart, Ms. McKeigue held master’s degrees from Columbia University Teachers College and the Massachusetts Institute of Technology Sloan School of Management.

She is survived by her husband Joe; their children Patrick, Heather, Michael, and Joanna, three of whom hold Boston College degrees; and 12 grandchildren. She also is survived by her brothers Patrick, Charles (Chuck), William III and sisters Kathleen Alioto and Nancie Chamberlain. She was pre-deceased by her parents, William and Mary Malone Sullivan.

Funeral services will be private. A celebration of her life is planned for the spring. In lieu of flowers, expressions of sympathy may be made in Ms. McKeigue’s memory to the Dana-Farber Cancer Institute. Sign an online guestbook here.