The Boston College Wall Street Council will host a discussion with M&T Bank Chairman and Chief Executive Officer René F. Jones ’86, one of the nation’s leaders in banking and finance, at its Business Leadership Forum on Wednesday, May 12, from noon-1:00 p.m. ET.

At the online event, Jones will talk about his career, challenges and successes, and the importance of diversity, equity, and inclusion in the workplace.

Founded in 1856, M&T Bank is one of the top 20 full-service U.S.-based commercial banks, with 18,000 employees and a long history of community-focused banking. 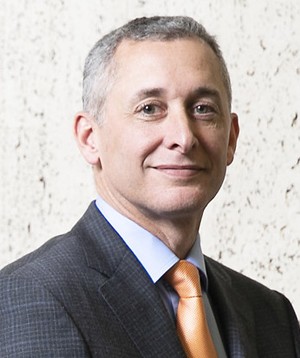 In his annual message delivered in March 2021, Jones, one of only four Black CEOs in the Fortune 500, asserted that "we must be united against injustice of any kind that affects any of our constituents" and that "we must, and will, do more to make our society better and empower our communities."

Within M&T, he said "we are proud of, but not content with the progress we have made. We have expanded the diversity of our Board of Directors and senior leadership team while embarking on programs that will enable us to be the bank of choice for diverse customers in every community we serve and ensure our colleagues truly feel they belong and can be their authentic selves at work."

Jones was elected to his current position in December 2017. He joined M&T Bank in 1992 as an executive associate and went on to hold a number of mangement positions within the finance division. He served as M&T’s chief financial officer from 2005 to 2016, was appointed to the management committee in 2005, and named vice chairman in 2014.

Previously, Jones held numerous positions at The Group Inc. He began his career with the Boston-based office of Ernst & Young, where he serviced clients in a variety of industries with a primary emphasis on financial services.

He received a Bachelor of Science degree from BC's Carroll School of Management and an M.B.A. from the University of Rochester’s Simon School of Business.

An active member in the community, Jones serves on the boards of The Jacobs Institute and the Burchfield Penney Art Center. He is also a board member for ACV Auctions, Inc., the Federal Reserve Bank of New York’s Federal Advisory Council, and the Massachusetts Historical Society’s Council of Overseers.