In Memoriam: Thomas A. Vanderslice

Thomas A. Vanderslice, an accomplished scientist and businessman whose generosity to his alma mater is exemplified in academics and brick and mortar alike at Boston College, died on October 9. He was 88.

Visiting hours will be Thursday, October 15, from 4:30–7:30 p.m., at John-Lawrence Funeral Home, 3778 Falmouth Road, in Marston Mills, Mass. A funeral Mass will be celebrated Friday, October 16, at 11 a.m. at Our Lady of Victory Church, 230 Main St., Centerville, Mass. A livestream of the Mass will be available at the parish website. 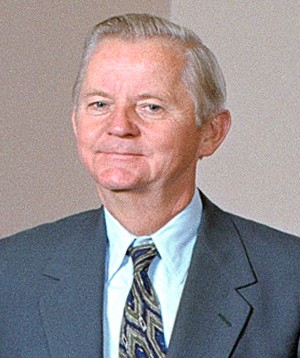 Over the period of a decade and a half, the Philadelphia native and 1953 graduate, who served on the University’s Board of Trustees for 17 years, and his wife, Margaret—whom he had met in high school after moving to Waltham—made a series of gifts that strengthened BC’s teaching and research in the sciences and supported its residential program for undergraduates. In 1989, the couple established the Margaret A. and Thomas A. Vanderslice Chair in Chemistry, the University's first endowed chair in the physical sciences. Nine years later, they founded the Joseph T. and Patricia Vanderslice Millennium Chair in Chemistry in honor of Dr. Vanderslice’s older brother and sister-in-law. In 2004, Dr. and Mrs. Vanderslice endowed the Fr. William B. Neenan, S.J., Millennium Chair in Economics to pay tribute to the beloved long-time University administrator and his service to BC.

A Vanderslice family reunion took place for a special occasion on November 17, 1995, when the University formally renamed the newly opened residence hall at 70 St. Thomas More Drive for Dr. Vanderslice’s parents, Joseph and Mae, commemorating another gift from Dr. and Mrs. Vanderslice. At the event, Dr. Vanderslice provided his own tribute to his parents by reading the lighthearted Edgar Guest poem “Father.”

“My parents would have been proud,” Dr. Vanderslice concluded. “And maybe now you can see why my family is so proud to honor our parents.”

Then-University President J. Donald Monan, S.J., and other BC representatives at the dedication praised Dr. and Mrs. Vanderslice for their contribution to BC’s residential program, regarded as a critical part of the University’s commitment to student formation. Geoffrey T. Boisi, who was trustees chair at the time, called Dr. Vanderslice “a true son of Boston College” and said the building would stand as “an enduring public expression of gratitude to the Vanderslice family and a wonderful tribute to the roots of Tom’s learning.”

After receiving a bachelor of science degree from BC, Dr. Vanderslice went on to earn a doctorate in physics and chemistry from Catholic University of America in Washington, D.C., where he was a Fulbright Scholar. He began his career as a scientist at the General Electric Research and Development Center in Schenectady, NY, then moved into management, where he held various positions across the country before being named executive vice president of General Electric's Power Systems Sector.

In 1979, Dr. Vanderslice left General Electric to become president and COO of General Telephone and Electronics in addition to serving on its board. Five years later, he became CEO of Apollo Computer and was instrumental in its sale to Hewlett-Packard. He subsequently joined M/A-COM, in 1989, where he served as CEO.

Dr. Vanderslice was credited with more than a dozen scientific patents, including the development of a bakeable mass spectrometer instrument, and authored 25 technical articles. He received the Academy of Achievement Golden Plate award in 1962 and was a member of the National Academy of Engineering and the American Institute of Physics.

Joining the BC Board of Trustees in 1978, Dr. Vanderslice served on the board’s Finance and Audit Committee, and was elected vice chairman in 1984; he became chairman in 1987, a post he held until 1990. He also chaired the fundraising campaign for the Merkert Chemistry Center, which opened in September of 1991.

BC presented Dr. Vanderslice with a Bicentennial Medal in 1976 and an honorary Doctor of Business Administration degree at Commencement in 2003; at the latter event, he was hailed as a “leading benefactor and sage, trusted advisor.”

Dr. Vanderslice’s support of Catholic education extended beyond Boston College: He and Margaret endowed a biology chair at Stonehill College, and he was a benefactor of Catholic University and the Catherine Laboure School of Nursing; he also served on the boards of trustees for Fairfield and Sacred Heart universities.

Margaret Vanderslice died in 2015. Dr. Vanderslice is survived his sons, Thomas Jr., Paul, John, and Peter, who all graduated from BC. His late brothers Joseph and James also were alumni; James and his wife established the James and Louise Vanderslice and Family Chair in Chemistry at BC.

Donations may be made in Dr. Vanderslice’s memory to Boston College either online or by mail to: University Advancement, Cadigan Alumni Center, 140 Commonwealth Avenue, Chestnut Hill, MA 02467.