Patrick F. Cadigan ’57, a grateful alumnus of Jesuit education and namesake of Boston College's Cadigan Alumni Center, died on April 23. He was 85.

A California real estate investor and one-time high-tech CEO, Mr. Cadigan made a $15 million gift to BC in 2012 to name the then-new facility at 2121 Commonwealth Avenue, reconstructed from the former Chancery of the Archdiocese of Boston. 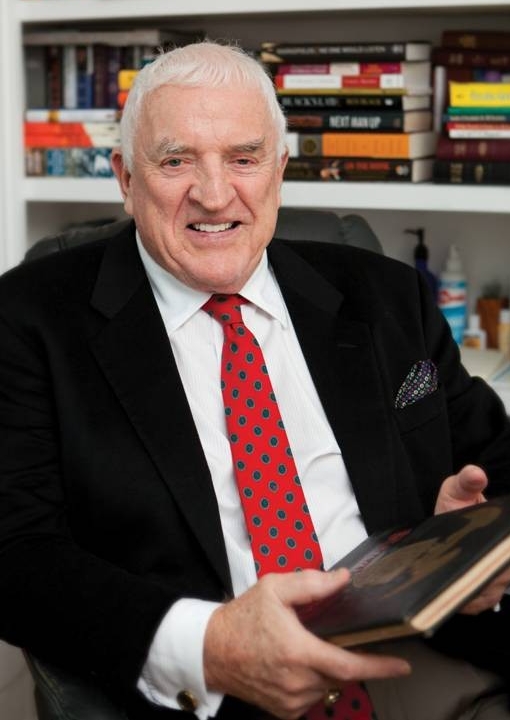 The Cadigan Alumni Center houses the University’s fundraising, alumni relations, and parent relations offices, while also serving as a home-away-from-home for Boston College’s 182,000 alumni. The center has been the site for numerous volunteer meetings, seminars, alumni events, and parent receptions.

Mr. Cadigan also made a $12 million pledge to Boston College High School, from which he graduated in 1952—the largest donation in the school’s history and the largest ever received by a Catholic secondary school in New England. Through Mr. Cadigan’s gift, BC High built Cadigan Hall, a new center for arts and recreation.

"Pat was a beloved member of the Boston College and BC High communities, a dedicated leader whose extraordinary philanthropy and commitment created a remarkable legacy at the Heights," Senior Vice President for University Advancement Jim Husson wrote in a remembrance. "In my role...I was fortunate enough to benefit from Pat’s friendship and wisdom over his many years of thoughtful engagement with the University. And like anyone who knew him, I was both inspired and impressed by his love for his family and friends, his deep affection for BC High and Boston College, and his genuine character."

Mr. Cadigan cited the discipline and moral training of his Jesuit teachers as the factors that helped him—the son of Irish immigrants who worked part-time at his father’s cafe in Cambridge to help pay for his education—to become one of Southern California’s most successful high-tech leaders and real estate investors.

“My education at Boston College was a great experience that taught me the importance of hard work, and instilled in me values and discipline that stayed with me throughout my years,” he said in a statement announcing his pledge to BC. “The foundation I received left an indelible impression on me, and prepared me for success in business and in life.”

He added, “My parents were not able to obtain a formal education, so I felt a very personal responsibility to give back to those wonderful schools that educated and shaped me.”

After graduating from Boston College, Mr. Cadigan worked as a product manager at Sylvania Electronic Systems in Waltham for five years before being recruited to the West Coast to oversee sales and marketing for Electronic Engineering Company of California. He rose rapidly to become its president and CEO, running the company for nearly 20 years, and expanding it both nationally and internationally. After his retirement from EECO, he served on the boards of 15 mainly high-tech and electronics firms, serving as chairman and CEO of several public companies. Mr. Cadigan also invested in real estate in Orange County for 40 years, a sideline that became his primary focus upon his retirement from the high-tech business world.

“Pat Cadigan moved out west as a young man, but never forgot his Boston roots and his affection for Boston College,” said University President Willam P. Leahy, S.J., at the time Mr. Cadigan’s gift was announced. “We are grateful for his generous support and delighted to have our new alumni center bear his name.”

In addition his bachelor's degree from Boston College, Mr. Cadigan holds an M.B.A from Boston University, a degree from Harvard University’s Advanced Management Program, and master’s and doctoral degrees from Claremont Graduate University.

Mr. Cadigan is survived by his children, Ann, David, and Maria, a 1991 BC alumna, and grandson Patrick.