About the Memorial Labyrinth

On September 11, 2003, a memorial labyrinth was dedicated to the 22 Boston College alumni lost in the 9/11 tragedy.

This labyrinth is a copy of the 13th-century labyrinth laid in stone on the floor of the nave of Chartres Cathedral. Labyrinths were common in Europe in the Middle Ages, and walking them was part of popular and religious culture. Labyrinths in sacred spaces represented the intersection of the human and the divine. This is a unicursal labyrinth, with a single path to the center and out again.

The symbolism of the Chartres labyrinth is complex. The circle, a perfect form, can be seen as symbolizing eternity, the universe, the repetition of the seasons, the cosmos—the overall perfect plan of the divine. The cross that bisects the circle can be seen as a symbol for Christ in the world. The meandering path is the journey of life. It can also be seen as a path of truth through the maze of choices that the world presents.

The path through the labyrinth constitutes the longest possible way to arrive at the center. It is important not to hurry the experience, but to submit to its structure and discipline. This path is an opportunity for meditation. Walk its circuitous route mindfully. It is a symbol of the universe, God's masterpiece.

The Boston College Memorial Labyrinth is located behind the Burns Library at the corner of Commonwealth Avenue and College Road. 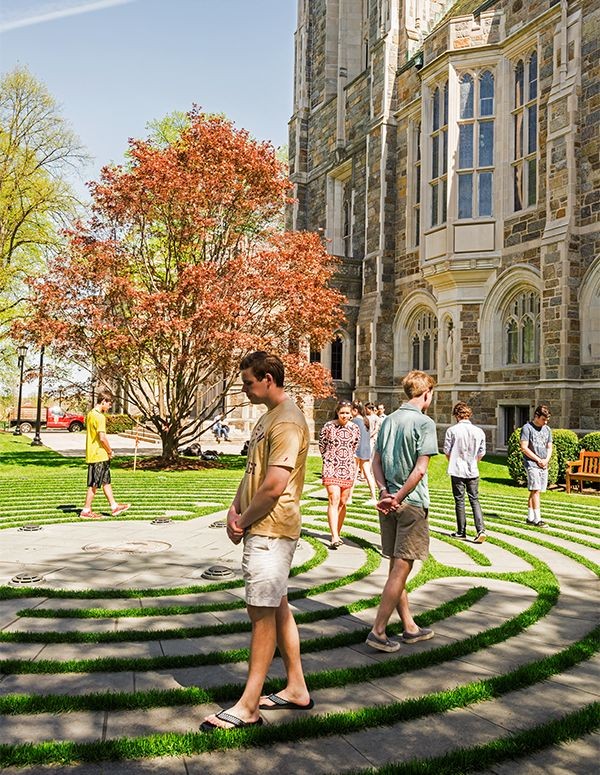 A Guide to Walking the Labyrinth

Five Paths through the Labyrinth

There are many approaches to the walk. Begin by quieting the mind and then follow the path that is right for you.

The Labyrinth of the Cathedral of Chartres

Around the year 1200, as the Cathedral of Chartres was being built, a large labyrinth about forty feet across was set with dark blue and white stones into the floor of the nave of the church. Similar labyrinths were placed in other French Gothic cathedrals, such as Amiens, Saint-Quentin, Rheims, Sens, Arras and Auxerre. Around the 18th century, all of these labyrinths, except the ones at Chartres and Saint-Quentin, were suppressed. The labyrinth at Amiens was later restored in 1894.

The Middle Ages was a time of pilgrimages. Since most people could not make the grand pilgrimage to Jerusalem, considered by Christians to be the center of the world, and symbolizing the Kingdom of Heaven, they would make pilgrimages to important cathedrals such as Canterbury, Santiago de Compostella and, of course, Chartres. Once at Chartres, they would end their pilgrimage by walking the labyrinth to the center, and then slowly retracing their steps to regain the "outside world."

Historically, the labyrinth of Chartres has been referred to by four different names:

Across these interpretations of the labyrinth of Chartres, we see how medieval theologians and artisans adopted pagan myths and symbols to express Christian concepts.