Welcome to The Bridge , the newsletter of the Office of Global Engagement. 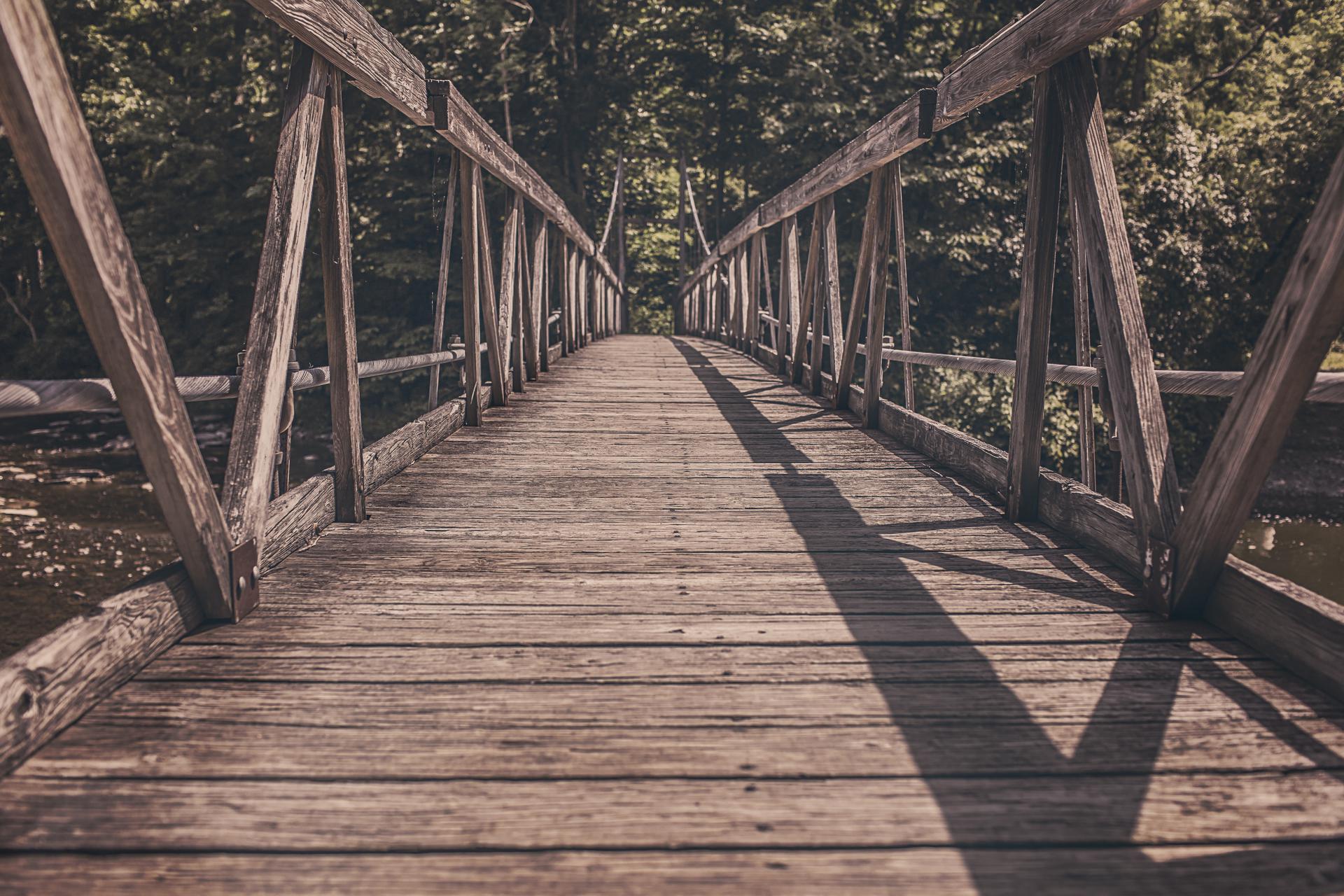 After difficult time apart, the Office of Global Engagement is eager to welcome the BC community back home. There are many exciting events to announce for this first semester back on campus. Consider following our twitter @BCisGlobal or checking the website for updates.

The inaugural, online SACRU Research Student Seminar 2021 will be held November 8-11, 2021. This is an opportunity to present your research as a five minute presentation. Graduate students are invited to participate in the inaugural SACRU Research Student Seminar on the theme ‘ A sustainable future: research delivering impact for the 21st century .’

Proposals need to demonstrate how your research connects with one or more of the United Nations Sustainable Development Goals and the goals of  Laudato si’ , Pope Francis’ encyclical on caring for our common home. At the heart of the 17 Sustainable Development Goals (SDGs) is the recognition that global efforts to end poverty must also work to improve health and education for all, reduce inequality, and promote economic opportunity while addressing action on climate change and environmental degradation. The 7 Laudato Si’ Goals (LSGs) also respond to the interconnectedness of social, economic and environmental justice in building and protecting our common home and supporting the common good.

Welcome Picnic for the International Community! 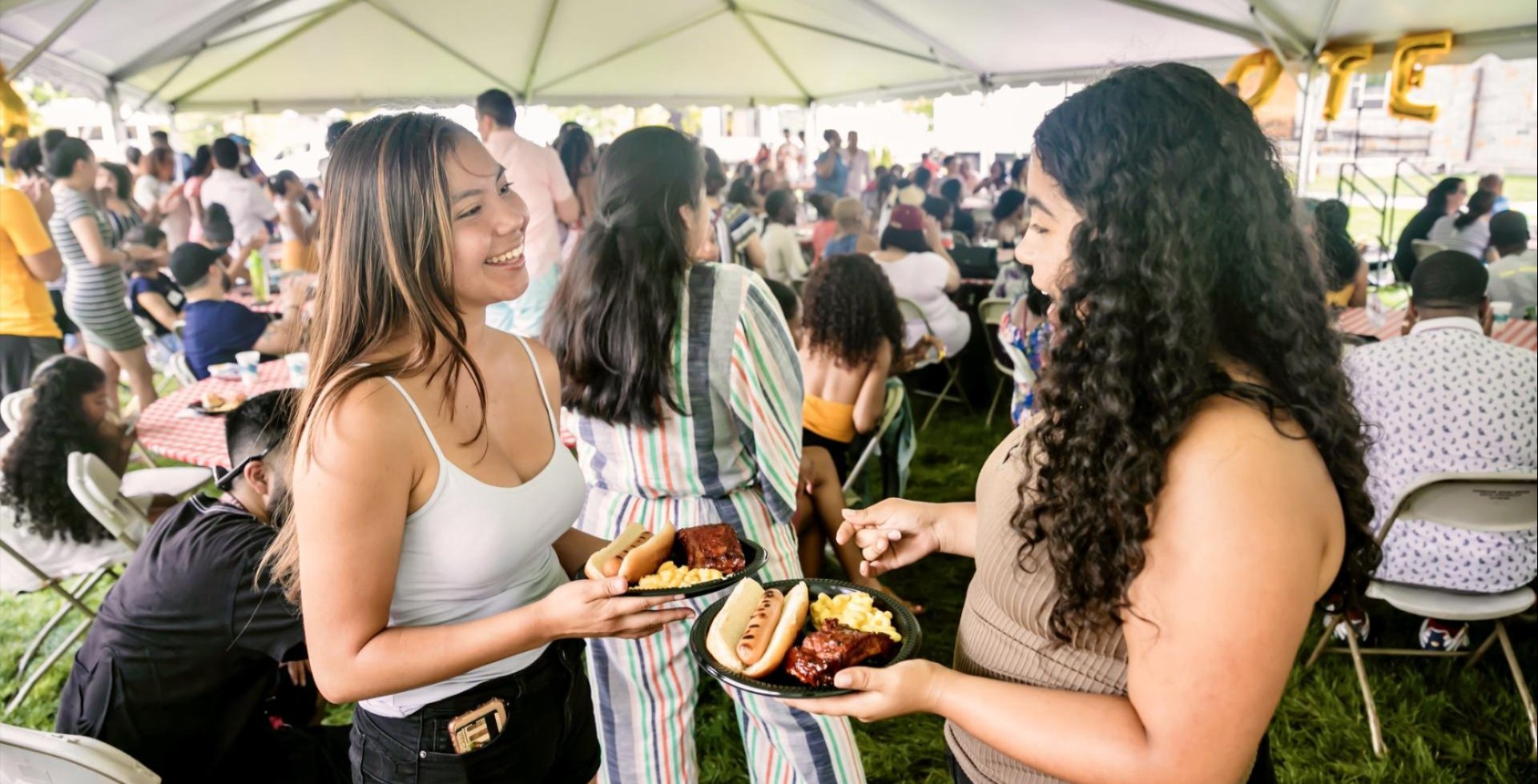 The Office of Global Engagement and Student Affairs will host a picnic to celebrate our international community on September 14, 2021 from 11:30-2:00 on the Lower Campus Lawn.

The 2nd International Conference on Educational Frontiers will occur November 19-20, 2021. This conference is hosted by the Boston College Lynch School and our partner, Ateneo de Manilla Gokongwei Brothers School of Education and Learning Design.

In this conference, education professionals come together to confront issues and questions about education policies and practices in pandemic and post-pandemic times. Proposals for multiple presentation formats are currently being accepted. All abstract proposals are due September 13th. View the link above to see more details.

Our office would like to highlight two philosophy scholars taking part in an exchange program with the École Normale Supérieure (ENS) in Paris, France. 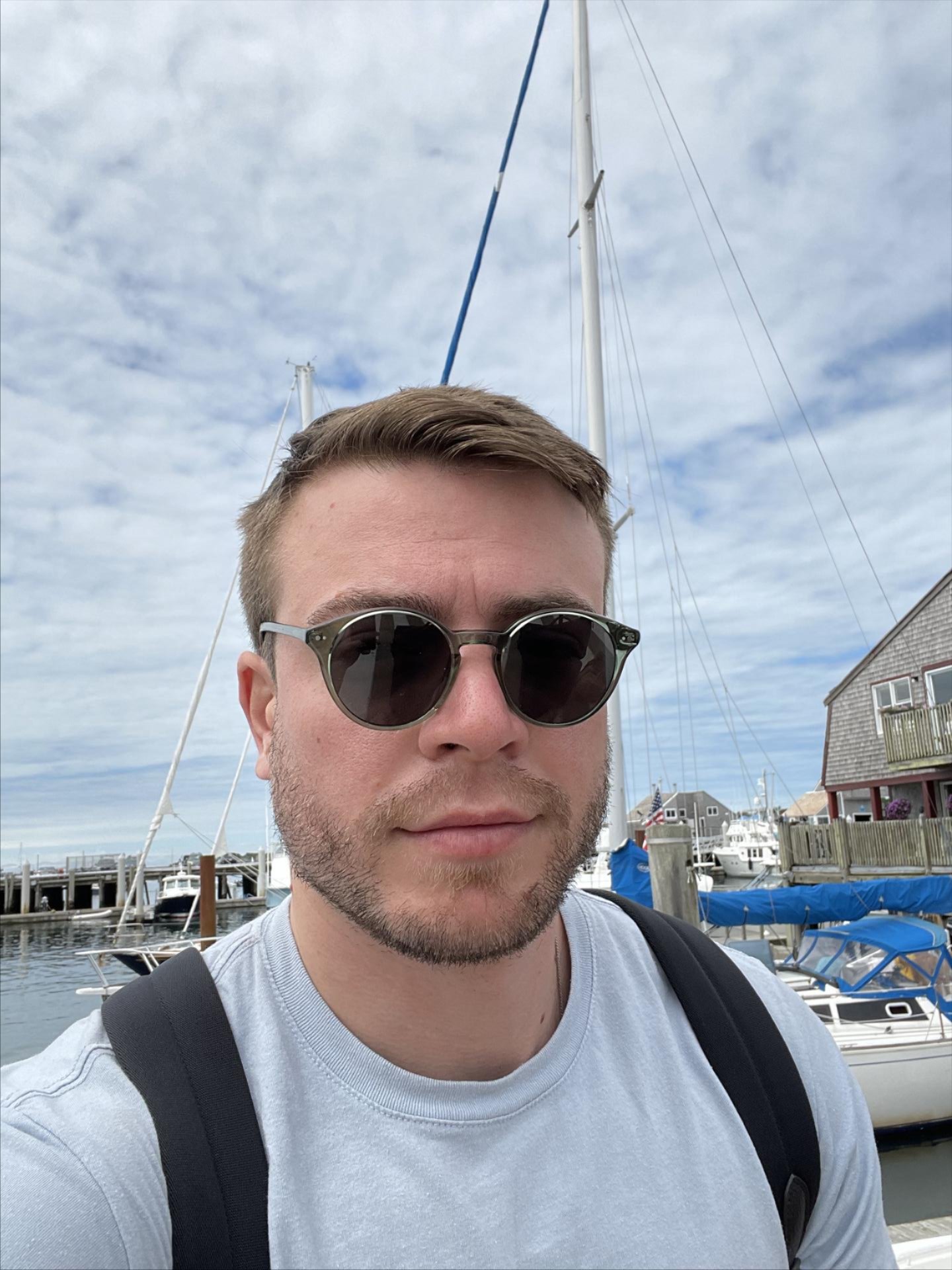 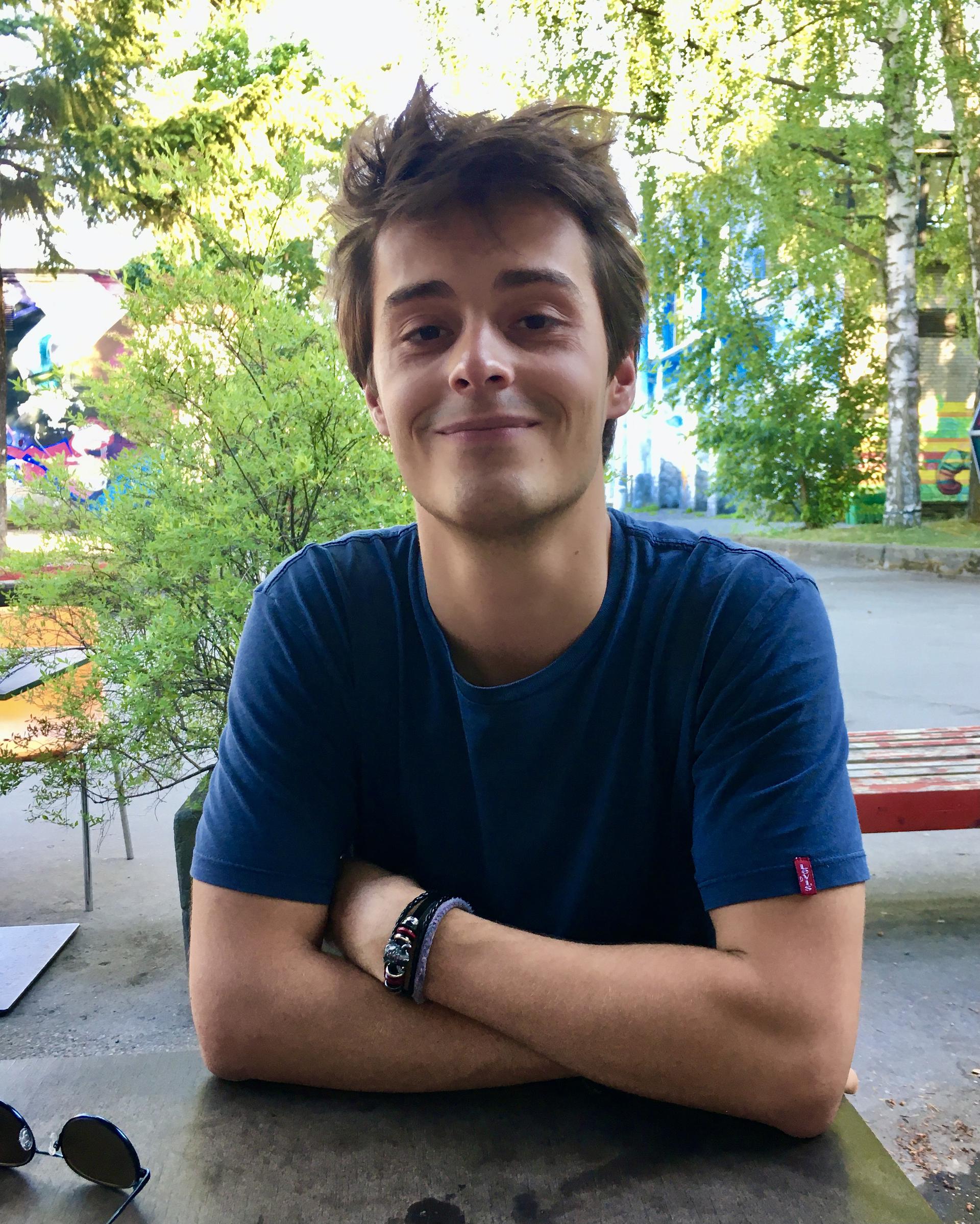 "I'm originally from Chile and I came to the philosophy department at BC to work on continental philosophy. I came here three years ago and it's been a wild ride. I've learned a lot of new things and made incredible friends along the road.

I am looking at some French thinkers in my research. So I am looking forward to learning about them from the experts at the ENS in Paris. I am now entering the dissertation writing phase of my program. I care about the concept of 'consent' and my research focuses on the line between agency and coercion in the context of subjects of liberal societies. I'm also hoping to improve my French!

I'm a big train guy, so I'm hoping to be on a train every weekend to a new place. And I did my undergrad in Belgium so it'll be nice to be able to hop over the border and visit old friends."

"I'm currently finishing writing my thesis then I'll receive my master's degree in philosophy from the ENS. After finishing my thesis, I want to examine the works of Henry David Thoreau. I also wanted to discover a new kind of higher education system and, because I am interested in an American author, it was quite logical to come to the USA because ENS has this agreement with BC. I liked the events happening at Boston College, and the Romance Languages & Literatures department faculty seemed interested in my studies. From a personal point of view, I absolutely wanted to go to Boston to see Walden Pond and Concord, too!"

Tom will be teaching French practicum courses this fall. "It's great to be able to teach and present about your research while you're a graduate student, because it would never be the case in France." 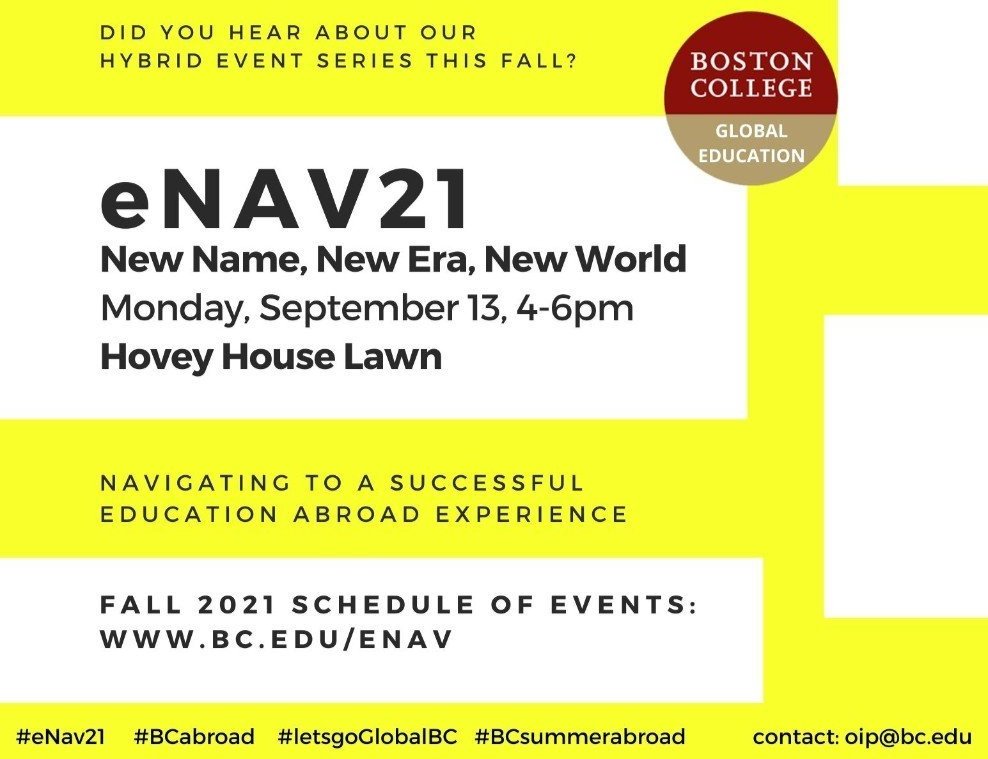 eNav21 'Navigating to a successful education abroad experience' starts September 13th with this in-person welcome event, and will continue through March of 2022.

eNav21 sessions are designed to allow us to be innovative and practical in bringing advising to students. Discussions will revolve around how study abroad fits into your major, students' identity while abroad, affordability, and discerning discussions. eNav21 is a collaborative effort organized by a wide array of departments and offices at Boston College, under the direction of the Office of Global Education.

A Companion to Modern and Contemporary Latin American and Latinx Art

The McMullen Museum welcomes William Paterson Professor of Art History Alejandro Anreus for a virtual presentation on his latest book, co-authored with Robin Adèle Greeley and Megan A. Sullivan,  A Companion to Modern and Contemporary Latin American and Latinx Art (2021). This forthcoming volume consists of over thirty new essays on the crucial historical and theoretical issues that have framed our understanding of art in Latin America. The event will occur on October 6th at 6 pm and is free. Register at the button above.

Cosponsored by the Fiction Days Series and the English Department, Dina Nayeri will give a reading from The Ungrateful Refugee , followed by a moderated conversation and audience Q&A. In  The Ungrateful Refugee , Nayeri weaves together her own vivid story with the stories of other refugees and asylum seekers in recent years, bringing us inside their daily lives and taking us through the different stages of their journeys, from escape to asylum to resettlement.

Dina Nayeri is the author of  The Ungrateful Refugee , a finalist for the 2019 Kirkus Prize and the  Los Angeles Times  Book Prize. Her essay of the same name was one of the most widely shared 2017 Long Reads in  The Guardian .

Crossing: How We Label and React to People on the Move

Hamlin's new book, Crossing , will be discussed at an event on September 21 at 4:30 pm at the BC Law School. In Crossing , Rebecca Hamlin argues against advocacy positions that cling to the dichotomy between those viewed as voluntary, often economically motivated, migrants who can be legitimately excluded by potential host states, and those viewed as forced, often politically motivated, refugees who should be let in. This is a hybrid event.

More Information from the McMullen

The African Student Organization presents  Taste of Africa  at the McMullen Museum.  Taste of Africa is a culinary exploration of the richness of various African cultures and a celebration of African society. The event will occur September 18th from 5:00-7:00 pm.

James Ferreira Moura will present the work he has been engaged with the last several months doing focus groups with African and Brazilian black, white, indigenous and quilombola undergraduate students at the International University of Afro-Brazilian Lusophony in Brazil, in groups divided by gender and race/ethnicity. He will present some of the panorama of the relationship between human rights and violence from the intersectional views of these undergraduate students. In addition, he will share their decolonial strategies for repairing violence and human rights violations. Finally, some ideas on how to continue this transnational dialogue in the United States will be presented.

Moura is the Professor of the Interdisciplinary Bachelor of Humanities at the University of International Integration of the Afro-Brazilian Lusophony (UNILAB) and of the Graduate Program in Psychology at the Federal University of Ceará (UFC), Brazil, and a visiting Fulbright Scholar of the Center for International Justice and Human Rights at Boston College 2021-2022.

"Director Michèle Stephenson’s new documentary Stateless traces the complex tributaries of history and present-day politics, as state-sanctioned racism seeps into mundane offices, living room meetings, and street protests. At a time when extremist ideologies are gaining momentum in the U.S. and around the world, this film is a warning of what can happen in a society when racism runs rampant in the government."

The film will be shown on October 19th at 4:30 pm. Stateless will be introduced by Franciscka Lucien, Executive Director of the Institute for Justice & Democracy in Haiti.

"Mariano: Variations on a Theme

The McMullen Museum would like to announce a new exhibition in collaboration with the Fundación Mariano Rodríguez. The first major exhibition on Cuban artist Mariano Rodríguez (1912–90) in the United States, this retrospective features over 140 oil paintings, watercolors, and drawings from leading museum and private collections, including the artist’s estate, which has provided unprecedented access to rarely seen works and archives. 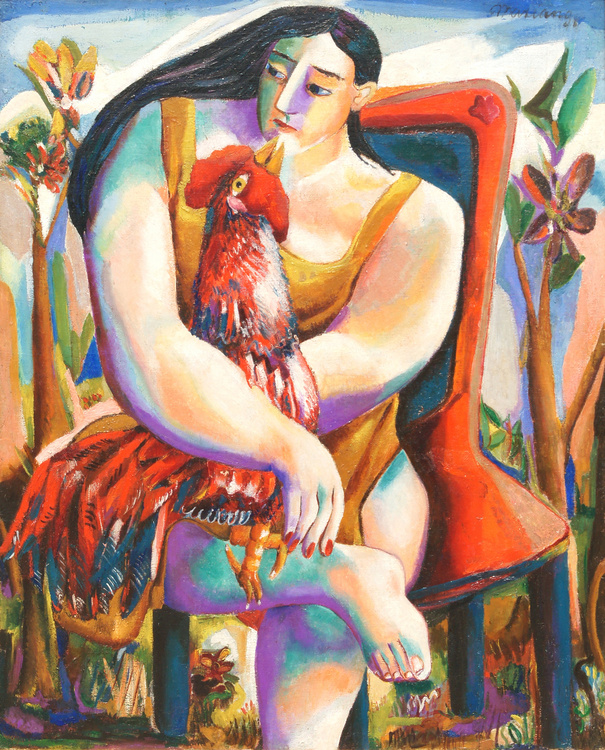 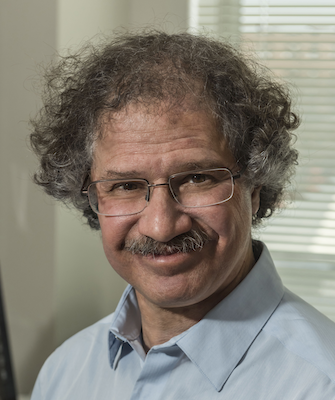 In July, Dr. Solomon Friedberg, James P. McIntyre Professor of Mathematics, served as the country representative of the United States to the International Commission on Mathematics Instruction at the US National Academy of Sciences's delegation to the 14th International Congress on Mathematical Education. His term as chair will continue until the end of December.

Ignatius 500 Series: Grace and Effort in the Spiritual Exercises

As part of the Ignatius 500 Lecture Series, Guy Consolmagno, SJ, Director of the Vatican Observatory will present "From Peru to Mars: New Worlds and Jesuit Science". This event will include lunch and be held in Gasson 100 at 12 pm on September 16th.

Consider following our twitter for future opportunities to engage with our partner schools and their events!

The Global Engagement Gateway is a compilation of resources meant to assist Boston College's faculty and staff in the process of engaging internationally—both on campus and abroad. This portal attempts to make these components more visible and convenient to ease that process.  Learn more at the link below: