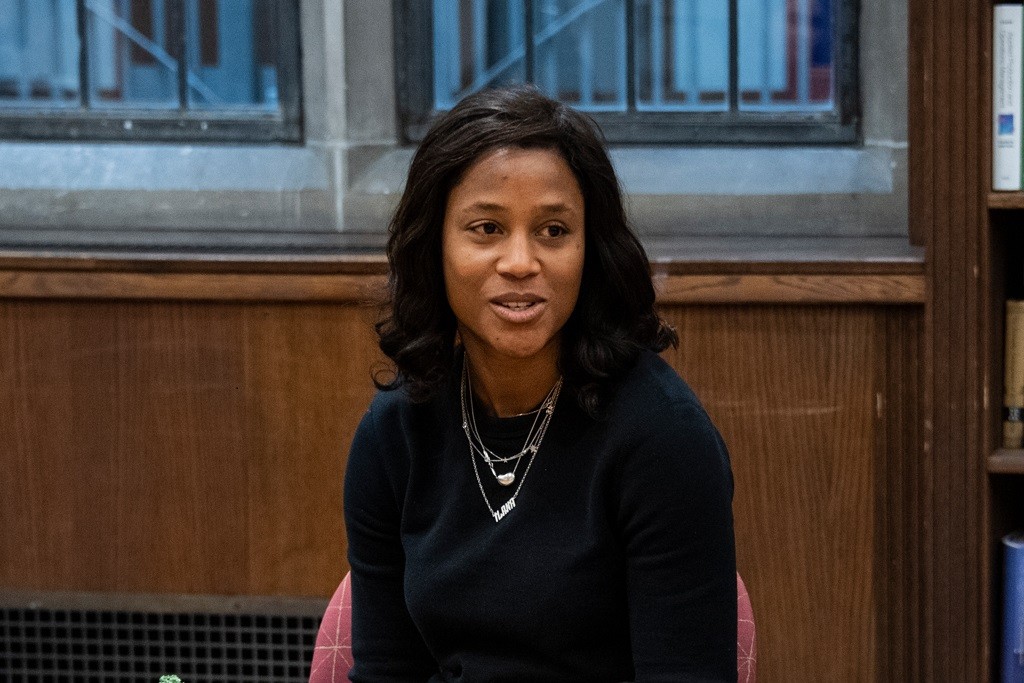 Corporations Have a Responsibility to Give Back to Community

In collaboration with the Managing for Social Impact and the Public Good minor, the Center launched its Social Impact & Lunch series. Ilana Finley, vice president of global communication and social impact at Converse, Inc., was the inaugural speaker. A lifelong athlete, Finley knew she wanted to incorporate her love of sport into her career, and where better to do that than Nike? She joined Nike, Inc., after graduating from the University of North Carolina, Chapel Hill, with a degree in journalism and a specialty in public relations. She started at Nike, Inc., as an administrative assistant to the director of communications in the U.S. Communications Media Relations Office in New York City. The director saw the administrative assistant role as a potentially unconventional opportunity to bring young talent into the organization and give them a path in the company, and after a few years of learning and prospering in the role, Finley was given the opportunity to move to Portland, Oregon, to work in communications in various business areas over the next few years. However, as a born-and-raised East Coast girl, she struggled to build a life for herself in Portland. Without personal connections there, she threw herself into her work, which was highly beneficial for her professional aspirations, but not necessarily so for her heart and mind. She was grateful for the experience in Portland and it helped her get “comfortable being uncomfortable,” but when the opportunity arose to move back to New York, Finley quickly accepted. Not long after being back in New York, she was approached with the opportunity to come to Boston for her current position at Converse (part of Nike). Her time at Converse so far has been an invigorating culmination of her career to date.

In Portland, Finley worked in Nike’s Corporate Foundation and began to develop a strong belief that brands and companies not only have a responsibility to drive social change but also a role in social impact that they can use their unique voices to play. She helped establish the Girl Effect, an initiative out of Nike that invested in girls as economic agents of change. The Corporate Foundation used the Nike name to empower the Girl Effect to dream big—Finley’s goal was to get the biggest world leaders to understand why girls are an important area to invest in and to get girls on the global agenda. The Girl Effect became involved in the World Economic Forum and Clinton Global Initiative, and became part of the conversation on major world stages. After Finley left, the Girl Effect spun off into its own nonprofit, but the way that Nike’s marketing expertise and ability to sell an idea impacted the Girl Effect stuck with Finley as she moved into her next role.

Although the Converse brand is over 100 years old and one of the most iconic in the world, there was no road map for establishing its social impact strategy in a way that would build the next century of success for the company. Finley addressed this challenge by establishing a focus area of Converse’s social impact. Within the greater Nike, Inc., organization, Converse’s identity incorporated both sport and arts and creativity, and Finley and her team saw the company’s mission as being a canvas for youth progress in those areas. They wanted Converse’s social impact goal to be to support progress through youth leadership. From there, they looked into ways that Converse could be supportive to programs and initiatives that support youth leadership and put tools for the future in the hands of youth. Finley described this process as “whittling down and getting to a sharp point” while using the past as an example for how the brand could have a unique impact. As Finley continues her work, she is careful to ensure that Converse remains authentic about the issues it supports, and always walks the walk rather than talking the talk. For example, she works hard to make sure that for every for-profit product connected to a social cause, Converse is actually supporting the cause in substantive ways.

Throughout her career journey, Finley turned to what she calls her personal “board of directors.” This concept came from a mentor of hers who advised her to gather a group of people who will offer different perspectives on decisions that she will face, and ask them to serve as a consistent source of guidance. Finley said, “Just as a company would have a group of advisors that help steer the path of the organization, having your own personal board to steer you forward is equally important.”

If Finley were on our personal board of directors, she would advise us to consider work-life balance. She sees an immense personal and professional value in life experiences like gap years, studying abroad, learning another language, and becoming a global citizen. Coming full circle, she also credits sport as her most valuable life experience. According to Finley, sport taught her discipline, grit, resilience, how to be a better teammate and individual, helped her understand when to lead and when to follow, and how to find confidence and remind herself that she belongs in the rooms she finds herself in today. She is proud to be part of an organization that helps impart those wisdoms onto other young people by enabling access to sport.