Working with a quantum material known as a kagome magnet, a team of Boston College physicists and colleagues have directly measured how individual electronic quantum states in the novel material respond to external magnetic fields by shifting energy in an unusual manner, the researchers report in the latest online edition of the journal Nature Physics.

The measurements generated by the project are the first of their kind to directly measure the momentum-resolved, field-induced evolution of these quantum states, according to the team, who collaborated with scientists at Renmin University in Beijing, China.

The findings offered the first experimental demonstration of theoretical predictions about how electronic band structure can change in these novel materials, in this case bulk single crystals of yttrium manganese tin YMn6Sn6, according to Boston College Associate Professor of Physics Ilija Zeljkovic, a lead co-author of the report. 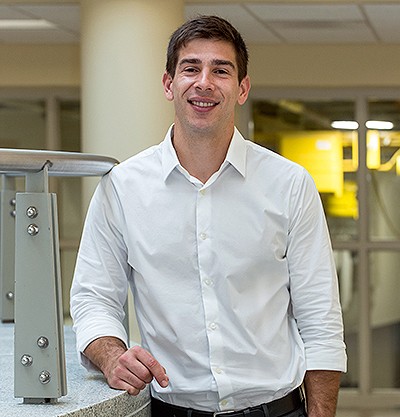 “When a magnetic field is applied to a material, electronic band structure—which is a collection of quantum states that electrons in solids can occupy—can change in unusual ways,” Zeljkovic said. “These changes have thus far been inferred from theoretical calculations or accessed indirectly from field-induced changes in macroscopic measurable properties. Direct measurement of field-induced changes to the electronic band structure has been difficult to measure.”

The team overcame the experimental challenges of studying the material through spectroscopic-imaging scanning tunneling microscopy. Kagomemagnets, like YMn6Sn6 studied by the team, are so named because they possess magnetic structure and an atomic lattice that resembles Japanese 'kagome' weaved baskets.

Theoretical physicists like Zeljkovic’s colleague and co-author, Boston College Professor of Physics Ziqiang Wang, have mathematically shown that Dirac fermions may evolve—from the standpoint of energy and momentum—in response to a magnetic field. The team set out to test those predictions, Zeljkovic said.

The team found that quantum states associated with Dirac fermions respond strongly to magnetic field, shifting to higher energies regardless of the direction of the field, according to the Nature Physics report, which is titled “Manipulation of Dirac band curvature and momentum-dependent g-factor in a kagome magnet.”

“Interestingly, they exhibit a momentum-dependent shift—for a setmagnetic field, quantum states near the Dirac point shift the most; the shift becomes progressively smaller away from the Dirac point,” Zeljkovic said. The Dirac point is a point in energy-momentum space where conduction and valence bands touch.

Zeljkovic said the expectation was that the system without magnetic field would host massless—or zero mass—Dirac fermions based on the orientation of spins lying primarily in-plane. Instead, the team made the surprising observation that Dirac fermions in this material at zero field have finite mass. Why this occurred will be a question for theoreticians to further explore.

From an experimental standpoint, Zeljkovic said there are many additional questions to resolve based on these findings. Specifically, there are multiple competing effects that can lead to a momentum-dependent band evolution, involving electron spin and orbital degrees of freedom. Orbital magnetism in particular, a property that has recently generated attention and excitement among researchers studying “twisted” van der Waals structures, is one of the extremely exciting possibilities, Zeljkovic said.

“Our future experiments will focus on disentangling different contributions and examining orbital magnetism in this and related kagome magnets,” Zeljkovic added.

The BC team also included doctoral candidate Hong Li and former doctoral students He Zhao, PhD ’20, and Kun Jiang, PhD ‘18, all co-authors on the report. Zeljkovic's research was supported by grants from the Army Research Office and Wang's work was supported by a grant from the U.S.
Department of Energy, Office of Basic Energy Sciences, and a Cottrell SEED
Award from the Research Corporation for Science Advancement.