Can you measure excitement?

Well, maybe not, but Associate Professor of Earth and Environmental Sciences Alan Kafka can somewhat quantify the effect of excitement, at least where Boston College football is concerned.

Kafka estimated that the seismic vibrations generated by the excitement of the crowd during the November 5 BC-Virginia Tech game at Alumni Stadium were equivalent to that of an earthquake of approximately between magnitude 1 and 2. He based his estimate on recordings made by BC’s Weston Observatory—of which he is the director—of football games, earthquakes, and a variety of other seismic events recorded by seismographs, including one located in Conte Forum.

Such readings shouldn’t be confused with those used in ranking the “loudest college football stadiums” (like the University of Washington’s Husky Stadium, where the game-time volume was once measured at a whopping 133.6 decibels), however.

“What the seismograph records is not typical audible ‘sound,’ so it’s not really normal ‘loudness,’ but rather the strength of seismic vibrations—similar to vibrations generated by earthquakes,” explained Kafka, who shared his finding, along with a graphic of the seismograph, on Twitter. “In the case of a football game, the source of the seismic waves are vibrations from activity associated with the game, such as the crowds of fans and the football players in the stadium, as they move during the game. But in the case of an earthquake, the source of the waves is an abrupt fracture in the Earth across a fault.

“Thus, the physics of a football game are so different from that of an earthquake that it’s hard to accurately estimate the equivalent earthquake ‘magnitude’ of the seismic waves generated by the game. But my rough estimate is between about magnitude 1 and 2.” 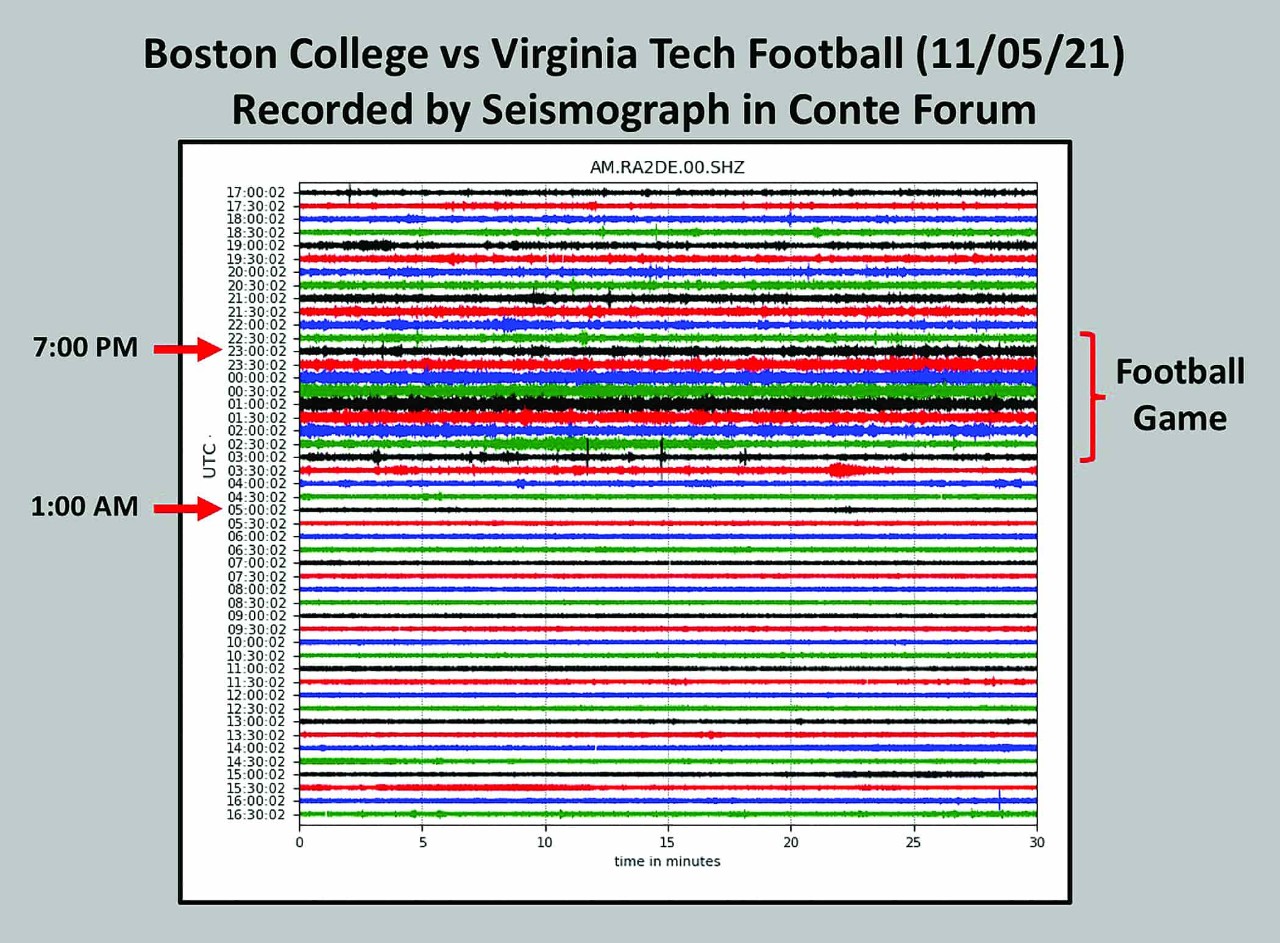 A seismographic record of the BC -Virginia Tech game, compiled by Associate Professor Alan Kafka, director of the Weston Observatory.

Kafka noted that a seismograph in the Yawkey Athletics Center gave a similar reading during the 2017 game between BC and Central Michigan in Alumni Stadium.

In fact, the “football stadium standard” is part of a guide Kafka once devised to give people a better sense of levels of seismic activity: A magnitude 1 earthquake, for example, was estimated to be the equivalent of about 3,500 students jumping a foot, compared to a magnitude 2 earthquake, which would be equivalent to about 110,000 students jumping—a number roughly the capacity of a large football stadium (Michigan Stadium, which holds a little more than 107,000, is the biggest by that measure); magnitude 5 would be about 3.5 billion students jumping, or almost half the population of the planet (which could fill roughly 32,710 Michigan Stadiums).

A more compelling comparison is to view seismic readings in terms of more common human activities, said Kafka, who co-authored a report in the journal Science last year showing that the COVID-19 pandemic resulted in a reduction of up to 50 percent in “seismic noise” around the world. In that context, the strength of the seismic vibrations from the BC-Virginia Tech game was about 10 times higher than it was in April of 2020, the quietest point in time during the COVID-19 lockdown.