Not exactly. But "Megatooth" sharks devoured prey at will about 40 million years after dinosaurs went extinct, a BC researcher shows

Just in time for summer, the megalodon—the ancient, city bus-sized shark known as the “Megatooth”—has reared its ravenous snout.

While the oceans are now safe from the Megatooth, which went extinct an estimated 3.5 million years ago, Otodus megalodon has been revealed by new research to have occupied a higher position on the food chain—known as its trophic level—than any other ocean predator, living or extinct.

That puts Megatooth, and probably some of its ancestors, at the top step of the prehistoric food chain when it stalked the seas during the Cenozoic era, which began about 66 million years ago and extended to present day, according to findings published in the journal Science Advances by a team that included Boston College Assistant Professor of Earth and Environmental Science Xingchen (Tony) Wang. 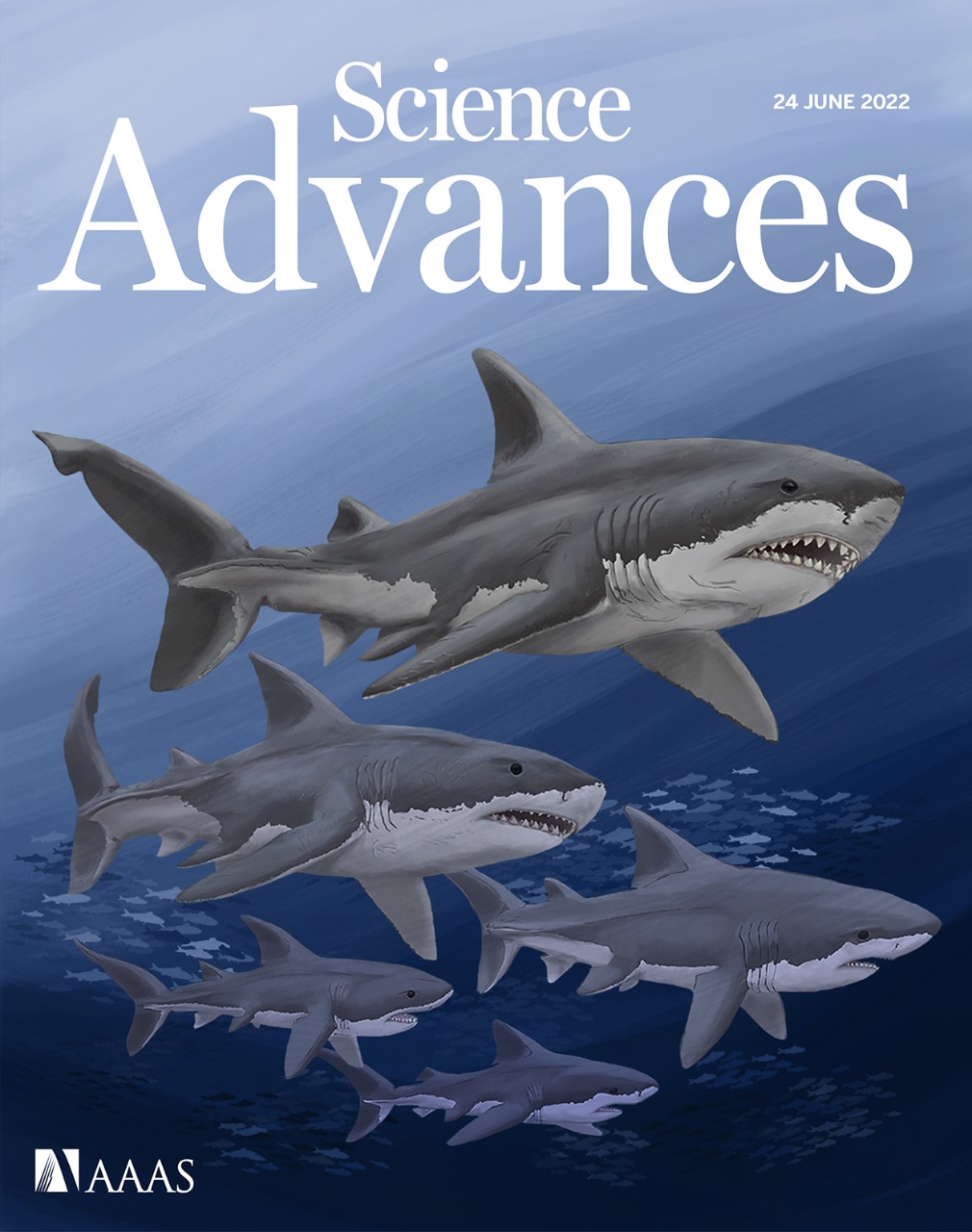 “It's more than calling Megatooth an apex predator,” Wang said. “An apex predator today might be eating smaller fish. Our study suggests that these megalodon were probably pretty picky about their food—they ate mainly other predators or even their own kind.”

The findings drew from a new technique that Wang developed while working on his doctorate at Princeton University. The technique determines trophic level based on nitrogen isotope ratios of trace organic molecules (mostly proteins) in the enamel of shark teeth as large as a man’s hand.

Those ancient proteins preserved in fossil teeth allowed researchers to determine that marine food chains during megatooth sharks’ time were about one to two steps longer than they are today. In other words, Megatooth ate not only predators, but the beasts preying on those seemingly dominant species. 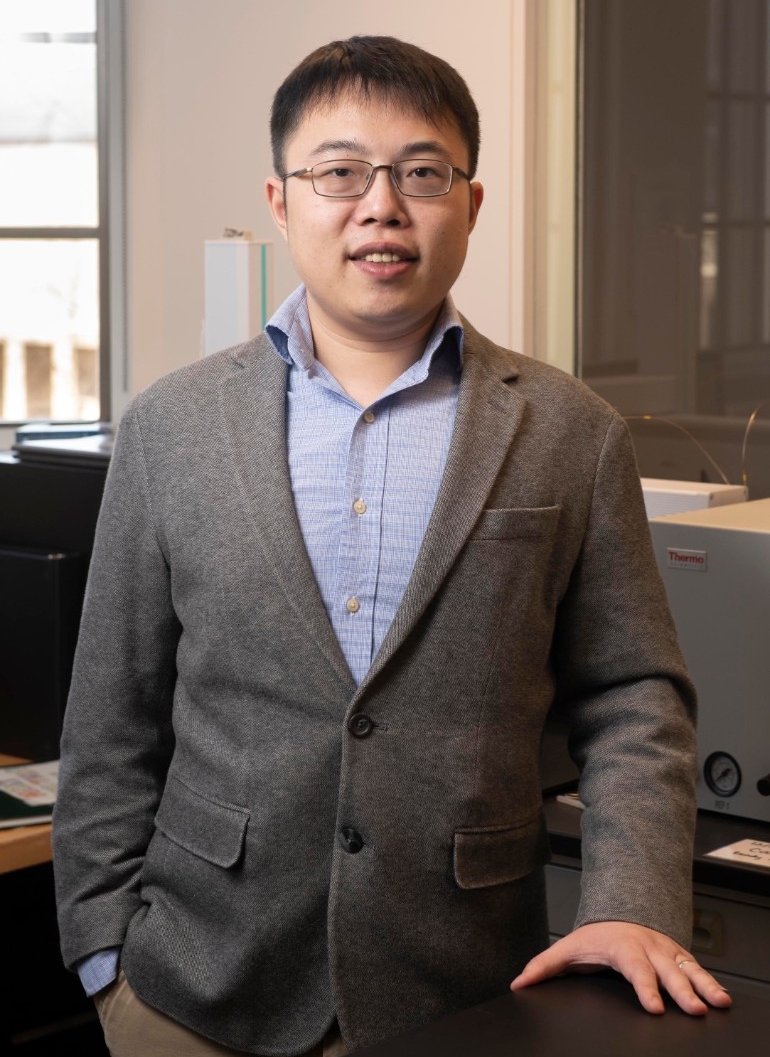 Wang started this project as a young graduate student working in the lab of Princeton Professor Daniel Sigman.

“We had developed a laboratory technique that could analyze the nitrogen isotopic composition of various kind of fossil samples,” Wang said. “Then I was looking for some fossil materials to analyze. There was a Shark Research Institute near Princeton University. One day I visited them and they gave me a box of shark teeth samples from the Caribbean Sea. That’s how this project started.”

Wang turned his attention to other projects and passed the early work to another graduate student, Emma Kast. Now a post-doctoral researcher at the University of Cambridge in the U.K., Kast advanced the work as part of her doctoral dissertation at Princeton and was the lead author of the Science Advances report “Cenozoic megatooth sharks occupied extremely high trophic positions”.

Kast noted the enduring presence of sharks across the span of time, existing long before the dinosaurs—for more than 400 million years—and continuing to evolve into the megatooth uber-predator well after the dinosaurs went extinct.

While many iconic big-bodied prehistoric creatures of the sea and land quietly sifted feedstocks from the ocean depths or nibbled on leafy treetops, the Megalodon was a meat-eating brute. And a survivor.

“We’re used to thinking of the largest species—blue whales, whale sharks, even elephants and diplodocuses—as filter feeders or herbivores, not predators,” Kast said in a news release. “But Megalodon and the other megatooth sharks were genuinely enormous carnivores that ate other predators, and Meg went extinct only a few million years ago.”

They say that the length of Megalodon has been estimated at approximately 50 feet—dwarfing modern great white sharks that grow to a maximum length of about 15 feet. While they were gone from the sea 3.5 million years ago, they left behind clues in an abundant supply of fossilized teeth divers have culled from the sea floor around the world. 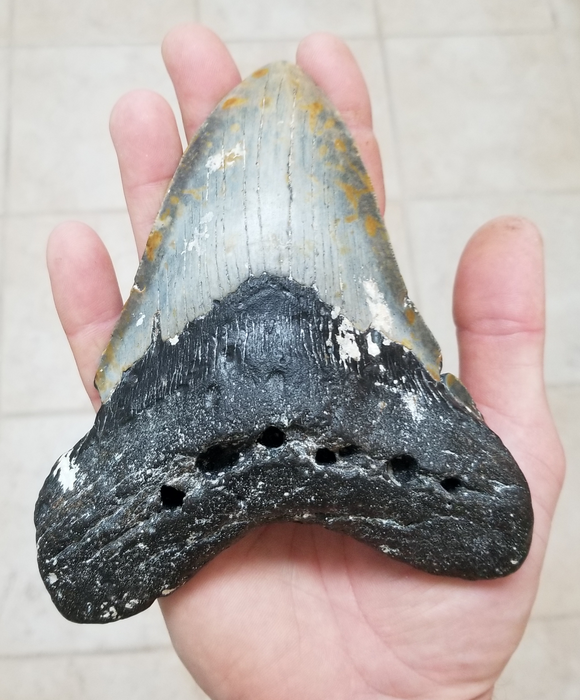 A Megaladon tooth held in the hand of paper co-author Harry Maisch at Florida Gulf Coast University, who gathered many of the samples used in this analysis.

Scientists first described fossil shark teeth the size of human hands about 180 years ago, according to previous studies. But paleontologists were challenged to identify Megatooth’s trophic level. Methods used in modern ecosystems could not be applied to extinct species.

Wang, Kast,and the team report they determined that measurements of nitrogen isotope levels within the enamel of modern shark teeth correspond with the nitrogen isotope levels in their dentin collagen, which is commonly used to determine trophic position for modern sharks. Animals at higher trophic levels have higher ratios of nitrogen-15 to nitrogen-14 since more nitrogen-15 is retained in their body during metabolism, according to the report.

When the researchers applied their new technique to fossilized megalodon teeth, they found that Megatooth had significantly higher nitrogen-15 levels than modern white sharks, polar bears, and orcas. However, these sharks did show a wide range of nitrogen-15 levels, indicating that not every large individual fed at the top of the food chain.

Since shark teeth are so abundant and are preserved so well, the nitrogen signatures in enamel provide a way to measure status in the food web, whether the tooth fell from a shark’s mouth millions of years ago or yesterday. There is still so much to learn about the marine food webs using shark teeth.

“We knew that megatooth sharks went extinct long before human civilization,” Wang said. “But human activities have been causing extinction of many marine species since the industrial revolution, so called ‘the sixth mass extinction’.

“When holding one of these massive teeth in my hands, I keep wondering: if they were to exist in today’s ocean, would they survive the ‘sixth mass extinction’?” Wang said.

Since Wang’s arrival at BC in early 2020, he has set up a cutting-edge Stable Isotope Biogeochemistry Lab, which now includes five doctoral students and one postdoctoral scholar. His lab continues to use fossil materials, including teeth, to study ocean chemistry and biology.

“We are one of a handful of labs in the world that could analyze the nitrogen isotopic composition of fossil materials, including corals, shells, and teeth.” Wang said. “Our students and postdoc are currently working on important questions ranging from climate change and its impacts to ocean pollution and marine food webs. Stay tuned for their findings!”


**Readers may view, browse, and/or download material for temporary copying purposes only, provided these uses are for noncommercial personal purposes. Except as provided by law, this material may not be further reproduced, distributed, transmitted, modified, adapted, performed, displayed, published, or sold in whole or in part, without prior written permission from the publisher.