Boston College has enrolled the most talented and diverse class in its 156-year history, thanks to the 2,297 undergraduates officially registered in the Class of 2023.

Accepted from a total of 35,552 applicants—the highest number in University history—the first-year class comes from 45 states and 41 countries, with a record 36 percent AHANA enrollment. More than seven percent are international students.

They are also the most academically gifted class, with an average SAT score of 1412 and ACT score of 32. On average, their unweighted GPA was an A/A-, and more than 80 percent were in the top 10 percent of their high school class.  A total of 303 are Pell Grant recipients (demonstrating high financial need), and 256 are first-generation students. Fifty-three percent are female.

“The Class of 2023 is a remarkably diverse and talented group of young women and men from around the world,” said Provost and Dean of Faculties David Quigley. “I am enjoying teaching 17 of them in my class, but the entire University community has been enriched by their arrival on campus.”

Director of Undergraduate Admission Grant Gosselin described the freshman class as “the most gifted ever assembled on the Heights,” as well as the most diverse.

“As Boston College's reach continues to grow, our students reflect this growing diversity, as evidenced by our record AHANA enrollment and the fact that nearly 70 percent of the class comes from outside of New England,” said Gosselin.

“In recruiting this class,” he added, “the students routinely mentioned their admiration of Boston College's long-standing commitment to educational excellence and social justice, while also expressing enthusiasm about the myriad opportunities that are unfolding at BC every day. From the announcement of the Schiller Institute for Integrated Science and Society, to newly created majors and minors, to the opening of the Margot Connell Recreation Center, the energy and excitement unfolding at Boston College is clearly being noticed by the world's top high school students.”

“The Class of 2023 is a remarkably diverse and talented group of young women and men from around the world. The entire University community has been enriched by their arrival on campus.”

In total, the Class of 2023 comes to the Heights from 1,254 high schools, 48 percent of which are public schools, 26 percent Catholic/Jesuit, and 27 percent private/independent.

“In addition to their keen intellect and the varied co-curricular talents they bring to campus, these students have demonstrated a desire and commitment to use their education to make a positive impact on the world,” said Gosselin.

“We are delighted to have them on campus, and look forward to their many contributions to the BC community in the years to come.” 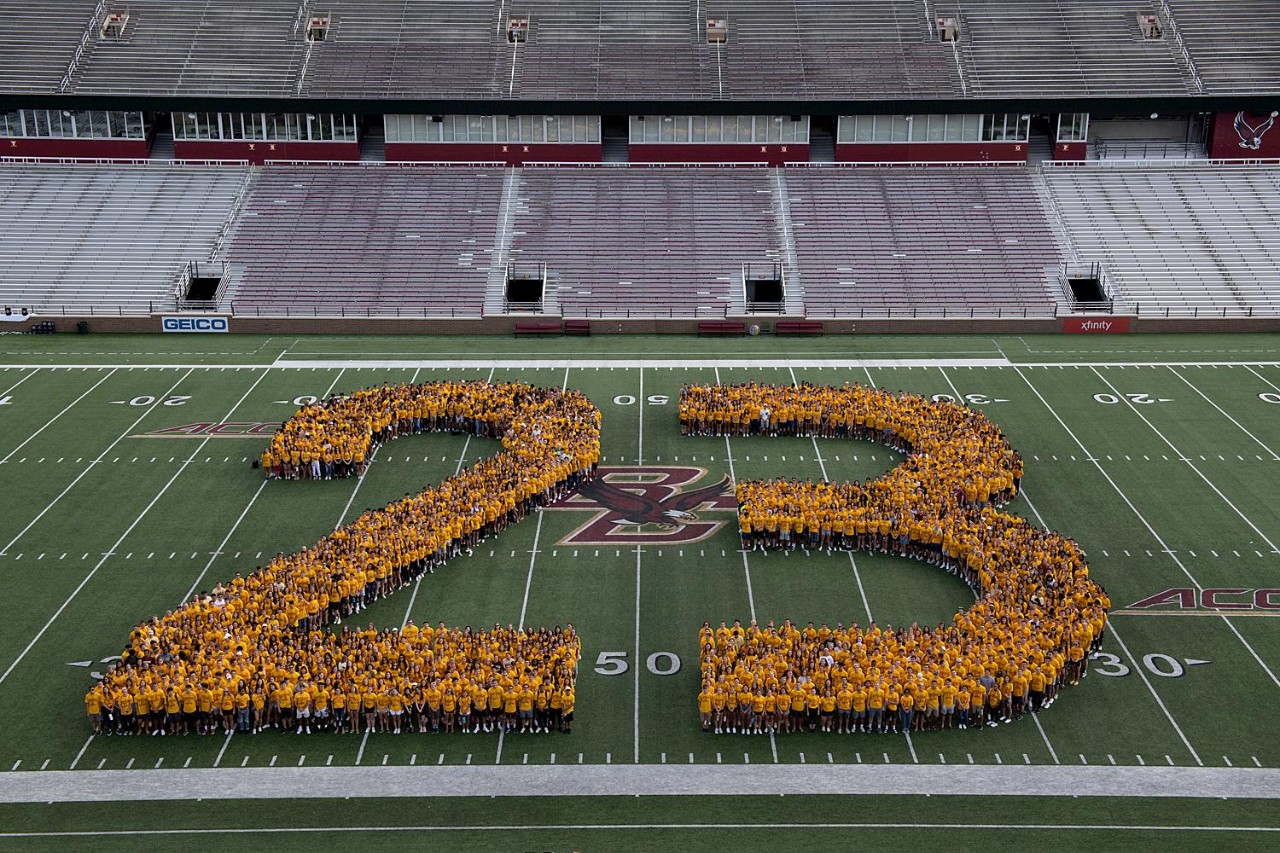 VIDEO: On August 24, 2019, newly-arrived members of the Boston College Class of 2023 gathered in Alumni Stadium for an official portrait. Watch how it happened—in just over one minute.