Soo Ae Ono '22 in the simulation lab. "The nursing program is what drew me to BC," she said. "I've loved my time here." Photos by Caitlin Cunningham.

Twice a week for four years, Soo Ae Ono ’22 walked across the Boston College campus, water bottle in hand, while most of the community around her was fast asleep. She was headed to Boston University, where hour-long physical training sessions for Air Force ROTC members began at 5:50 a.m. sharp. By the time her roommates were awake, Ono, a nursing major, would be back at the Heights, ready to start the next phase of her day.

“Some nights you might only get two hours of sleep, but it was a lot of fun,” insisted Ono, who graduated in May. “It’s where you built that comradery with other students, and you got a good workout in, of course.”

Early-morning pushups aren’t the only requirement of the AFROTC program, which is hosted by BU and open to students from select colleges and universities across greater Boston (Boston College hosts an Army ROTC unit). Cadets attend academic classes on topics ranging from military history to national security, and practice drill and commands during a weekly leadership laboratory. Once a semester, they participate in a field leadership exercise at Fort Devens, a military base an hour west of Boston. 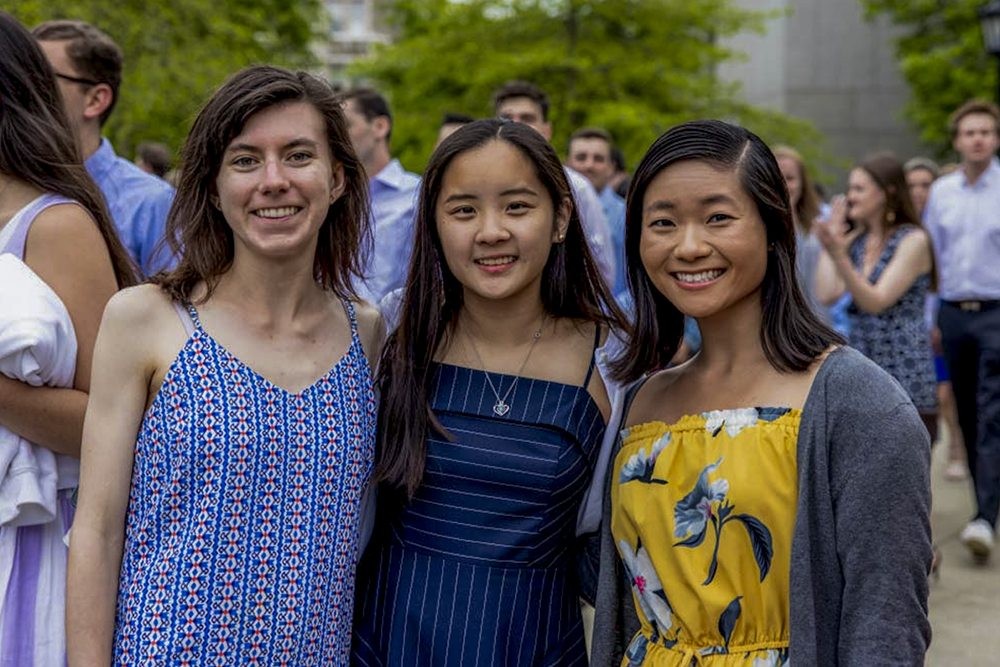 Soo Ae Ono (far right) at Senior Week. "Oftentimes you see graduation as the end, but I know it's just the beginning to this whole life and career ahead of me," she said.

Ono was introduced to the Air Force by her sister, a Technical Sergeant who was stationed in Japan when Ono was a middle school student in Gloucester, Massachusetts. Ono joined a junior ROTC program in high school, and began to see the military as a path to both an education and an exciting career. Her senior year, she received a partial AFROTC scholarship to attend Boston College’s Connell School of Nursing, where she began training to become an Air Force nurse.

“I wanted to pick a profession that focused on science, but also helping people,” she said of her decision. “Nursing combines both of those things, and I thought, if I can do that, but in a bigger capacity through the military, why not?”

Committing to the AFROTC program meant juggling a packed schedule of classes, clinical rotations, and training exercises, while still making time to socialize and get homework done. (“You have to love it to be able to get through it,” Ono acknowledged. “In the end it’s worth it.”) It also introduced Ono to a community larger than Boston College: her senior year, more than 50 cadets from nine different schools were part of the BU AFROTC program.

Her freshman and sophomore years, Ono and other underclassmen wore uniforms consisting of khaki pants, navy blue polo shirts, and black shoes (jokingly referred to as “Best Buy employee attire”) while soaking up information from their upper class mentors. By her senior year, Ono had graduated to a camouflage uniform and was selected as the Cadet Wing Commander, the Cadet Wing’s top commander charged with making executive decisions and working with officers to coordinate events. Before graduating, she also served as a leadership laboratory officer, a more supportive role.

Among her peers, Ono’s chosen career path is relatively rare: she was one of just three nursing majors her senior year in the program. This fall, after passing her national licensure exam, she’ll travel to Fort Sam Houston in San Antonio, Texas, for a Nurse Transition Program before relocating to Travis Air Force Base in California for a 3-4 year assignment. When her training is complete, Ono will have a chance to specialize in areas ranging from mental health to critical care, or pursue an advanced degree if she wishes.

“At that point, your doors open up and your opportunities are endless,” she said.

Leaving the East Coast for a new life in California was initially daunting, but Ono is excited to begin serving in the field she chose as a high school cadet. Her experience in the AFROTC program has taught her not to fear the unfamiliar, and to rely on mentors for support in difficult situations.

“Before this year, I could probably only name five different planes, and here I am going into the Air Force, which is known for their planes,” she laughed. “I used to be embarrassed by that but I’ve learned that I don't need to master everything, I just need to know who the right people are to ask. I think that just reinforces the teamwork and unity aspect of the military that I'm looking forward to so much.”