Part of something big

They can only be seen under a microscope, but the importance of platelets in the human body is massive in scale.

The tiny blood cells, named for their plate-like shape, are what keep skinned knees and nasty paper cuts from becoming life-threatening events.

“Platelets are what clot your cut so you don’t bleed out wherever you are,” explained Ben Posorske ’20. “They’re essentially the body’s natural Band-Aid.”

Posorske, a biology major at Boston College, knows a thing or two about the subject. This summer, an article he co-authored was published in Platelets, a peer-reviewed medical journal covering all aspects of platelet-related research.

The article, “In vitro culture of murine megakaryocytes from fetal liver-derived hematopoietic stem cells,” outlines the results of groundbreaking research conducted by a lab run through Brigham and Women's Hospital with funding from the National Institutes of Health. Posorske has been a student researcher at the lab for the past two years, working alongside established scientists to transform the way platelets are delivered to the thousands of patients who need them.

“Our main focus is being able to artificially create large quantities of platelets without needing a human donor,” he said. “This would be novel in the science world.” 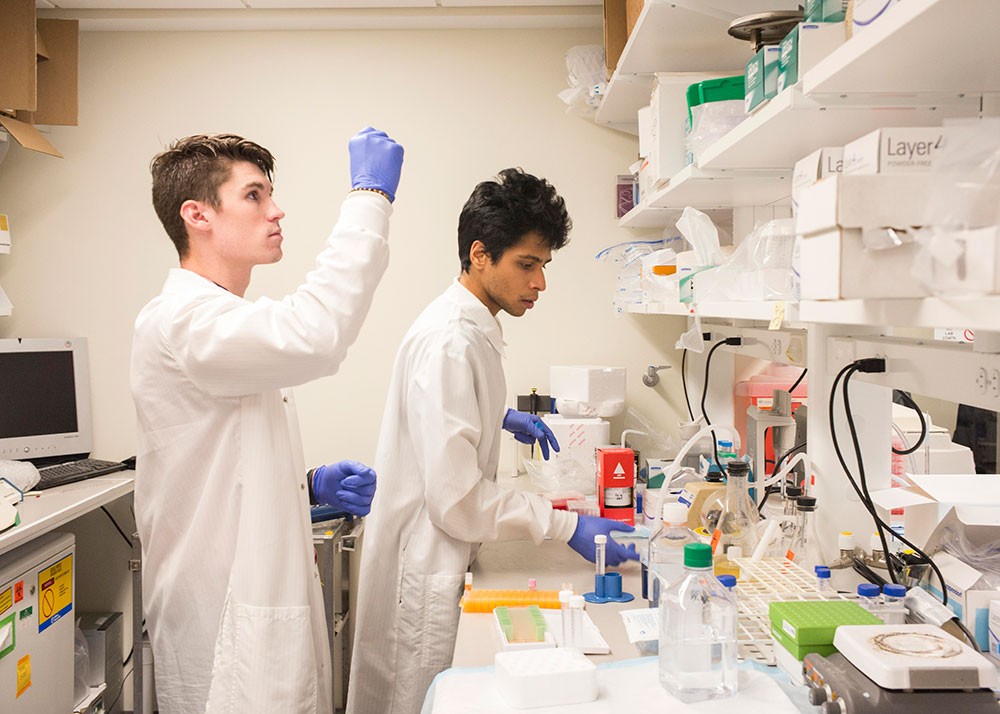 The demand for platelet donations in the United States is constant, in particular because the cells have a shelf life of only five days. Hospitals rely on platelet transfusions during major surgeries, to help save accident victims, and to counter the effects of radiation in cancer patients. When natural disaster strikes, organizations like the American Red Cross often issue desperate pleas for platelet donations.

When Posorke arrived at Boston College, he knew little about platelets, but he had already developed a love for scientific research. As a high school student in Scottsdale, Arizona, he spent summers assisting with cardiothoracic surgery research at the University of Colorado, Denver.

His decision to attend BC was motivated in part by its location in a city known for being at the forefront of biomedical research. Several days a week, he rides the Green Line to Longwood Medical Center, a hub of world-class hospitals, labs, and research facilities. Most of his colleagues have ties to nearby Harvard Medical School or Brigham and Women’s Hospital.

“Biology students at Boston College are fortunate to have research opportunities both within the department and off campus in Boston and Cambridge,” said Biology Department Interim Chair Kenneth Williams. “Often these opportunities are a springboard for medical school or future graduate studies and industry positions.”

For Posorske, being able to participate in real-time scientific advances has reaffirmed his passion for biology, and helped him thrive in his undergraduate courses.

“A lot of the stuff that I do in the lab translates directly to my classes,” he said. “I’ll be in a lecture and hear a term or we’ll be talking about a microbiology concept and I’ll have a better understanding of it because I’ve had the experience in the lab already. It’s cool seeing the correlation between the two.”

Posorske and his colleagues are already working on another paper, this time on machine learning related to the production of artificial platelets. If all goes well, Posorske could have multiple publications under his belt before he graduates.

“It’s been a really exciting time for me,” he said. “I’m learning so much and being challenged every day. It’s been a lot of time, a lot of effort, but it’s all worth it.”