A semester at sea

A rare glimpse of land from aboard the SSV Robert C. Seamans. All photos by S-302 Students.

In a blog post published from the middle of the Pacific Ocean on March 19, Lavinia Clarke ’23 shared an example of her new favorite pastime aboard the SSV Robert C. Seamans: writing “painfully rudimentary” haikus.

She went on to describe her day as a student and crew member aboard the 134-foot sailing vessel: 6 a.m. wake-up (followed by five minutes spent searching for the aforementioned clothes in the dark), breakfast, six-hour lab watch, lunch (a “glorious” peanut butter and jelly), deep cleaning duty, and finally, a much-needed shower.

“Each of these events have brought me to now, writing to you while looking at our electronic chart that shows us within spitting distance (take with a grain of salt) of the Big Island,” she wrote. “Our time is coming to a close and I can’t help but spend the five seconds a day I have to sit down thinking about each of the wonderful people I’ve had the privilege to share this experience with, the beautiful ship I’ve called home…and what the future holds for me as a person learning to navigate what comes next.”

Study abroad experiences usually take place on land, but SEA Semester—run by the nonprofit Sea Education Association—offers high school and college students a chance to spend an extended period of time sailing the open ocean. Participants work as part of their ship’s crew—charting courses and cleaning the galley—while collecting data and conducting research projects on topics like climate change and marine biodiversity. 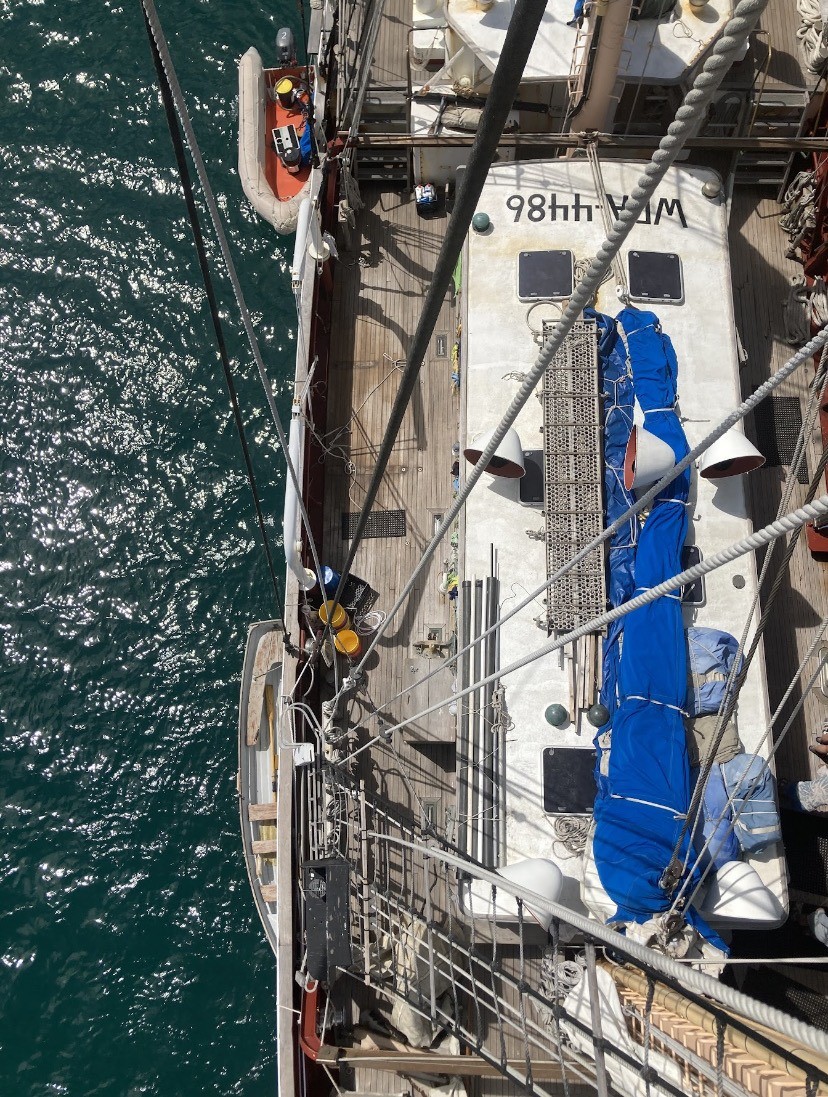 An aerial view of the SSV Robert C. Seamans.

For Clarke, who spent her fall semester studying abroad in Norway, SEA Semester seemed like the ideal opportunity to gain hands-on experience that complemented her environmental studies major.

Clarke chose the Global Ocean voyage for its focus on the interaction between oceans and climate change, and arrived at Woods Hole in January for six weeks of courses on topics like marine environmental history, conservation and management, leadership, and oceanography. In February, she and 20 other students flew to Honolulu to begin a five-week voyage aboard the SSV Robert C. Seamans.

Adjusting to life on the water proved difficult for Clarke, mainly because there was never any stillness. As they traveled north towards the island of Kauai, the ship leaned heavily to one side, and the constant rocking motion made it a challenge to stay upright, whether she was processing water samples or brushing her teeth.

“You’re in bed and you’re rolling around, you try to put your shoes on and you're thrown against the wall,” she recalled. “I struggled with that a lot at the beginning because there was never a time I could just feel calm and secure.” 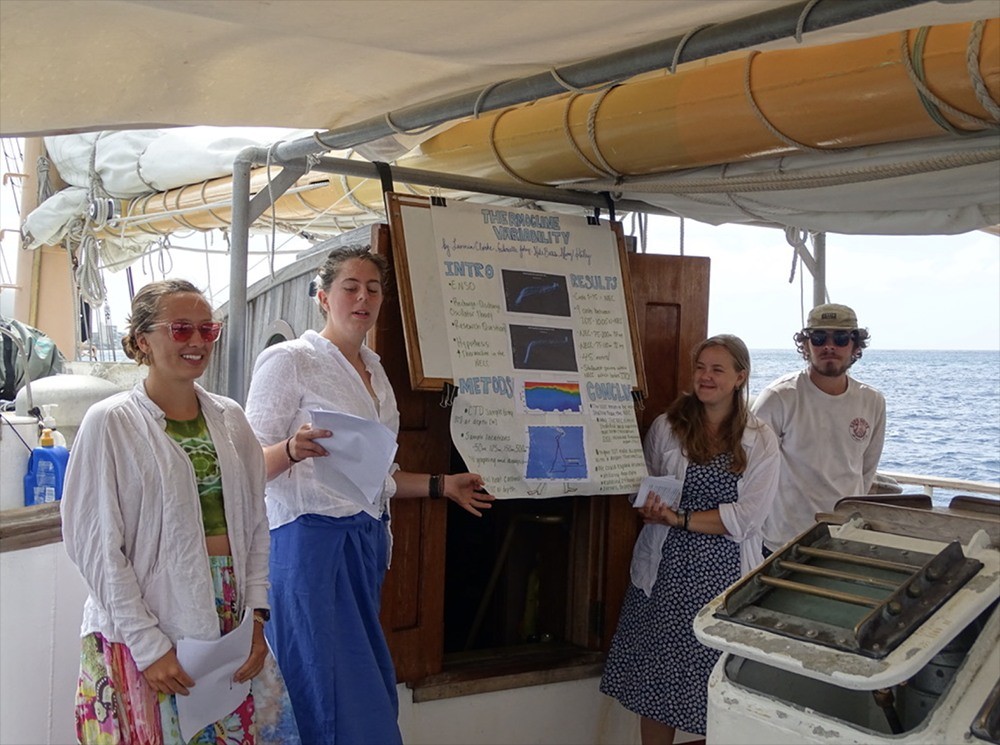 Clarke (second from left) and her team presenting their research findings.

Being confined to a ship hundreds of miles from land was also isolating (at one point, the closest humans were the astronauts on the space station) and Clarke longed to see or smell something other than saltwater. “It really is always the same shade of blue,” she joked.

Students were assigned six-hour shifts to collect and process samples, which they used to complete their research projects. Clarke’s team studied the El Nino-Southern Oscillation, a climate phenomenon involving the ocean and atmospheric circulation in the Pacific, which required temperature readings at different depths. Other projects required the students to measure the levels of pH alkalinity, chlorophyll A, phosphate, and nitrate in water samples, or to cast nets and analyze their contents (mini squids, lobster larvae, jellyfish, and Portuguese man o’ wars were just a few of the specimens Clarke identified.)

Other shifts were dedicated to the ship itself. Students met with the captain, conducted boat checks, handled the sails, and assumed lookout duty from a post at the bow. They learned the ins and outs of the engine room as well as food production in the cramped galley. In their spare time they slept, did homework, journaled, or drank tea on the cabin top, watching the big dipper rise on the horizon or flying fish skate over the waves, without phones or an internet connection to distract them.

“Those were the moments when you could be so present with the people around you, and there’s a lot of magic in that,” said Clarke. “It was great to learn and to develop skills but I definitely think the biggest thing I got out of the experience was the connection—with people, with the crew, and with myself.”

The voyage also made Clarke more open-minded about her post-BC life. She’s still passionate about environmental studies, and the disproportionate impact of climate change on marginalized populations, but she’d also like to work outdoors, and possibly with kids. Grad school might be in her future. Her only certainty is that she never wants to stop learning.

Scenes from the voyage