At the core of teaching and learning

What happens when the teacher is also the provost? Undergrads and BC's chief academic officer engage in a core exploration of 'Moby-Dick'

As a kid, Giovanna Eichner ’23 had a poster of first lines from famous novels, at the top of which was the phrase “Call me Ishmael.” Intrigued by this three-word sentence, she did a little research and found out it was from Herman Melville’s Moby-Dick, which she understood to be “a very long book about a whale who attacks a ship.”

Over the years, Eichner formed a somewhat fuller impression of Moby-Dick and by the time she graduated high school she knew it was considered one of the most influential works of the mid-19th century American Renaissance. But she still hadn’t actually read the book.

Then she came to Boston College.

This fall, the Morrissey College of Arts and Sciences student thoroughly immersed herself in Moby-Dick while also learning about the cultural, political, social, and economic milieu that shaped the sensibilities of Melville and his contemporaries, from Ralph Waldo Emerson to Louisa May Alcott to Abraham Lincoln. Eichner was one of 17 first-year students who enrolled in a paired sequence of classes in the University’s Core Curriculum: The Worlds of Moby-Dick, for history credit, and Reading the Fate of Man, the Face of God, and the Malevolence of the Whale in Herman Melville’s Moby-Dick for literature credit. 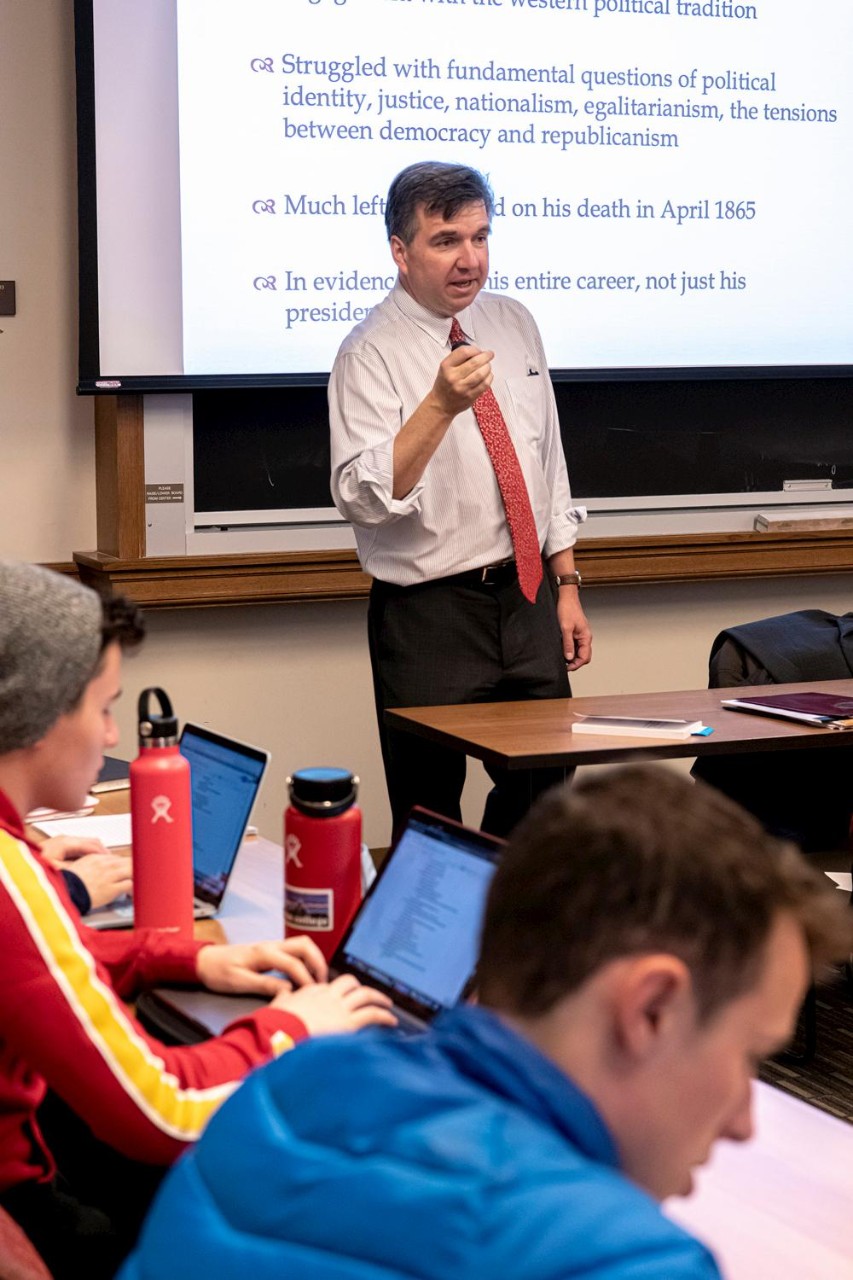 Provost and Dean of Faculties David Quigley in class.

Boston College has invested considerable time and resources during the past several years in revitalizing its Core Curriculum, and that commitment plays out on a daily basis around the Heights, through faculty members who interpolate the vision and mission of the core through readings, class discussions, and writing assignments.

Those faculty members include Provost and Dean of Faculties David Quigley, who taught The Worlds of Moby-Dick; his long-time friend and colleague Michael Martin, an associate dean and associate professor of the practice in the Morrissey College Honors Program, led the complementary class, and the two classes also met jointly for reflection and discussion.

In the classroom, the University’s chief academic officer is first and foremost a professor of history who encourages his students to hone their analytical and reasoning abilities, think deeply about what they read, and present their views in class—and to see how the things they learn in this and Martin’s class apply elsewhere during their BC education, and beyond.

Eichner, who is considering a major in Environmental Studies with a minor in English or history, is one student who embraced the task. “I often find myself reading Moby-Dick while thinking both about what it is influencing, and is influenced by historically, and using themes from the literature itself to better understand the impact of the events going on within the time it was written,” said the Potomac, Md., native, in an interview earlier this fall.

“Beyond that, in my Perspectives class, and even my course on climate change, I cannot help but link certain ideas from the Moby-Dick class to what I am reading and learning about. I’ve begun to realize that a lot more from literature and history can be applied to contemporary problems than I ever thought possible, and in ways I would not have expected.”

Eichner also appreciated the format, structure, and general atmosphere promoted by Quigley. “Our class has a bond that makes participation and discussion very engaging and fun. This has helped me become better at forming my own opinions and raising questions, all very important skills that have helped me in other areas of my life.”

“I’m a better provost because I take part in the core, but most of all because I get to interact with undergraduates, and freshmen in particular: I like to see the unique energy they bring to class, and their engagement with one another.”

As far as Quigley is concerned, the benefits go both ways. “It’s energizing to me to be in the classroom, and especially in a core class,” said Quigley, who usually teaches one class during the academic year. “I’m a better provost because I take part in the core, but most of all because I get to interact with undergraduates, and freshmen in particular: I like to see the unique energy they bring to class, and their engagement with one another.”

Having worked with Martin over the years and sharing a mutual interest in Melville, Quigley felt that the two of them could devise a pair of classes suited to the core’s interdisciplinary Enduring Questions model, through which subjects crucial to the human experience—health and illness, love and marriage, and the relationship between humans and the natural world—are explored. While The Worlds of Moby-Dick was rooted in historical elements of the era, such as the whaling industry and its place in the global economy, Quigley also wanted to focus on period writing and other modes of expression.

“There’s something about this generation of Americans and their use of language that is distinctive and enduring,” he said. “It’s not just what they say but how they say it—this offers insights into the defining events of the time, and the nation the U.S. was becoming.”

On one recent raw, damp November day in a Stokes Hall classroom, Quigley and his students trained their collective lens on Lincoln’s Gettysburg Address, examining words and phrases from various angles to discern their intent and meaning. Quigley—who asked how many in the class memorized the Gettysburg Address while in school (several had)—periodically nudged the students to comment (“What’s Lincoln doing here?”) and they responded thoughtfully: One said the speech’s “structured phrasing makes it easier to remember and repeat”; another saw Lincoln warning of higher stakes beyond America’s survival, that “if America fails, this whole experiment of freedom fails”; another was struck by the way “Lincoln grouped all the combatants together, not ‘Union’ and ‘Confederate.’”

At one point in the discussion, Quigley gave some advice: “Read the Gettysburg Address aloud. You really benefit from hearing how the words sound, and the rhythms they take on.”

As immense a figure Lincoln might be, Quigley invited students to see him as a man of his time, not without flaws, trying to move where events led him even as he remained tethered to less enlightened ideas and attitudes. Only months before issuing the Emancipation Proclamation, he said, Lincoln declared that he favored establishing colonies in Central or South America for American blacks, so as to separate the races (Melville dealt with colonialism in his writing, too, Quigley noted, with similarly complicated ideas on race and democracy).

“Even after all these years, I’m still grappling with this,” Quigley told the class. “What was going on with Lincoln in the late summer of 1862?”

Students offered their takes: “Maybe he was trying to prevent a war he thought would come after the Civil War,” said one; “It was a cop-out,” said another, to which Quigley replied, “Yeah, but it wasn’t just a Lincoln cop-out, it was part of what many in his generation believed.”

With class time running down, Quigley quickly set the stage for an assessment of the Emancipation Proclamation and how Lincoln used it “as the basis for turning the overall war, and the Union, into a liberating force.” Students closed their notebooks, picked up backpacks and water bottles, and headed into the hallway.

Afternoons like this helped make freshman Michael O’Shea’s first semester at BC an enjoyable one.

“College is all about learning new and different things, so I wanted to push myself in a field I really knew nothing about,” said O’Shea, a Morrissey College student mulling an economics major. “I felt that reading this book would be a great entry into my college experience, where I could learn a lot from two very knowledgeable people in Professors Quigley and Martin. So far the class has been just that.”