Remembering the victims of COVID-19

From 200 miles away, Boston College students are contributing to a new kind of journalism in New York City

When Riane Lumer ’24 signed up for PULSE, Boston College’s popular program combining community service with classroom learning, she thought a tutoring position would be a good fit. Then she met Terry Parris Jr., a journalist working in New York City on a project to identify and memorialize the New Yorkers who had died from COVID-19. After listening to Parris describe the project over Zoom, Lumer immediately signed up for an interview.

“It was an unprecedented time,” recalled Lumer, a student in the Lynch School of Education and Human Development. “I recognized that this could be my one chance to give back during the pandemic in a tangible way.”

Missing Them, a collaboration between the nonprofit newsroom THE CITY, where Parris worked at the time, and two of the nation’s top journalism schools, is a project to report the names and stories of the more than 30,000 New Yorkers who have died from COVID-19 since the first case was reported in March of 2020. Visitors to the online memorial can search for specific names or browse the stories of strangers. So far, the site contains the names of more than 2,300 individuals, and 400 obituaries.

When Lumer began volunteering for Missing Them in fall 2020, the pandemic was still spreading and vaccines were a few months from being widely available. The number of deaths in urban areas like New York were climbing, particularly in low-income communities and among people of color. But despite the fact that they were dying at twice the rate of white residents, Black and Latino New Yorkers were rarely reflected in the obituary pages, said Parris, who recently accepted a job at the New York Times’ Headway initiative. 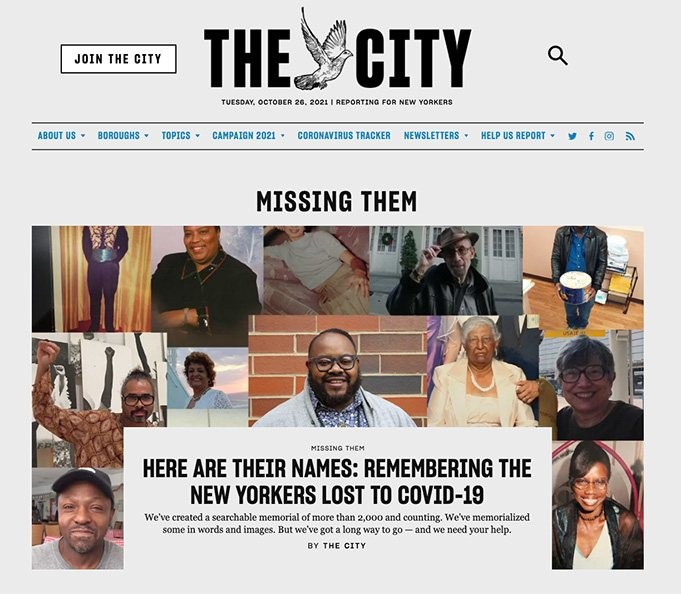 Lumer and her classmates set out to help change that. From their residence halls on the Heights, they researched community centers and organizations in hard-hit boroughs like the Bronx, reaching out to representatives there to inform them of the project. In February, they began conducting Zoom interviews with family members of the deceased, and writing obituaries for publication on the Missing Them site.

The conversations, each 15-20 minutes long, yielded vivid descriptions of unique personalities. One man spoke of his late brother’s devotion to caring for their autistic sister, as well as his passion for collecting comic books, of which he’d accumulated more than 5,000. The daughter of a Colombian immigrant described her mother, a factory seamstress who later became an entrepreneur, as “the life of the party,” and someone who was “always willing to give to people who were in need.” Every Sunday, Luis Figueroa would make tuna salad while dancing along to salsa music at his home in Queens, said his son, and a year before his death, he’d become a U.S. citizen on his third try.

In many interviews, it was clear that the process of sharing their loved one’s story was a necessary part of a family member’s healing process. Volunteers learned how to respond when a caller broke down in tears and how to be empathetic while remaining professional.

“It’s such a deep dive into an emotional and vulnerable spot in their lives,” said Ethia Hu ’23 of the interviews. “They’re talking about someone they loved and sharing all of these deep, personal memories of them, sometimes for the first time.”

This spring, Hu was assigned a side project collecting photographs of victims for a virtual memorial organized by New York City Mayor Bill de Blasio’s office to commemorate the one-year anniversary of the pandemic. The images were among 470 to be projected onto the Brooklyn Bridge in a moving display broadcast by media outlets nationwide. The experience of contributing to the event stuck with Hu, an economics major who grew up in New Jersey.

“I never thought as a college student in Boston that I could have such a large impact on a community I’m not really a part of,” she said. “I’m just profoundly grateful to have contributed even on the smallest scale.”

Since it launched, recognition for Missing Them has come in many forms. It’s been made into an online theater production, broadcast in December, and selected for a prestigious Magic Grant by the Brown Institute for Media Innovation. This fall, it won the 2021 Knight Award for Public Service, previously awarded to the New York Times’ 1619 Project.

Boston College’s involvement came largely by chance—Eileen Sweeney, a PULSE faculty member in the Philosophy department, reached out to Parris after hearing him interviewed on the radio. At the time, Sweeney and other PULSE professors were pondering ways to make service opportunities available to students online. Soon, a partnership was born.

“It couldn't have been a more perfect match for us,” Sweeney said. “We’re always thinking about how a particular experience illuminates larger systemic issues, and with Missing Them you see so clearly how the loss of an individual is connected to their community, what’s going on in healthcare, and the type of work they do that puts them at risk.”

This summer, the Gabelli Presidential Scholars became BC’s newest crop of volunteers, gaining new skills in researching, reporting, and fact-checking. With Lumer as their mentor, the group reached out to almost 100 families and wrote nearly 50 obituaries for publication. And although her PULSE course ended last semester, Lumer has continued her involvement with the project, remaining in touch with several families.

“I didn’t realize how attached I would get or how much these stories would teach me,” she said. “One man told me his father’s goal was always to be kind and recognize that you don’t need to be acknowledged for it to feel as though it’s rewarding. That resonated with me—I’m not being recognized by anyone for this work but it’s so gratifying to think about how important it is.”