Thinking outside the box

While the coronavirus pandemic has forced many business owners to limit interactions with customers, the opposite is true for Torry Katsiroubas Stamm ’03. In fact, the president and fourth generation owner of Katsiroubas Bros. has seen more faces (albeit masked and from a distance) in the past 10 months than the previous 10 years combined.

The change of pace came after Massachusetts Governor Charlie Baker ordered restaurants to cease the majority of their operations in March. Stamm, whose company distributes produce to restaurants all over New England, flew into action, diverting truckloads of perishable food to local grocery stores as order cancellations flooded in. Forced to lay off half her workforce and with 80 percent of her business up in the air, Stamm invented a new business model on the fly.

“We got together and we thought, everyone eats and we have food here,” she recalled. “How do we get it to people who need it the most?" 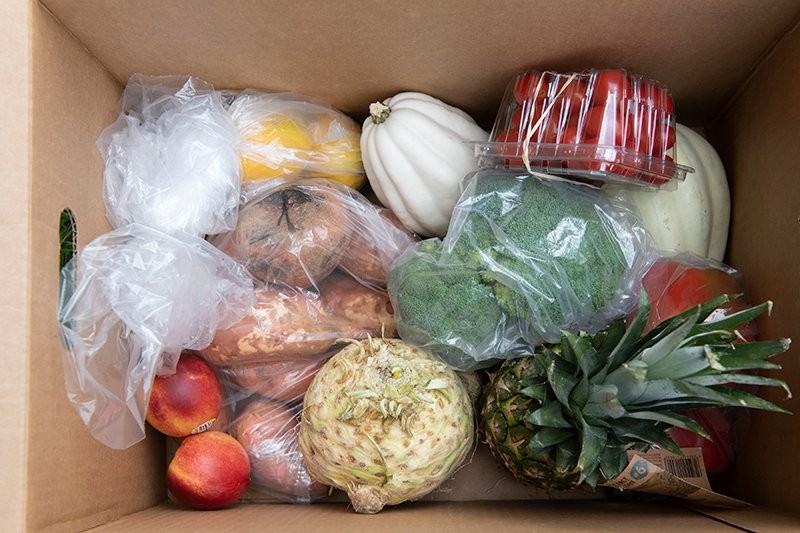 The large and small produce boxes contain a different mix of fruits and vegetables each week.

Out of a frenzied brainstorm emerged the Katsiroubas Cares Box: a cardboard container of fresh fruits and vegetables sold directly to consumers at wholesale prices. In the beginning, Stamm delivered the boxes herself, calling restaurant owners to identify staff who might be in need of free food, and dropping it outside their doors. Eventually, she set up no-contact pickups at empty parking lots throughout Eastern Massachusetts, inviting the public to reserve boxes online and retrieve them without stepping out of their cars.

The concept took off quickly and, months later, interest hasn’t waned. On a sunny afternoon in October, a line of cars snaked through an otherwise empty parking lot in Needham, pausing next to a green Katsiroubas Bros. truck, where Stamm stood with a clipboard. Over the next two hours, she doled out 180 boxes, each filled to the brim with tomatoes, peaches, lemons, swiss chard, and more.

“People have likened it to playing ‘Chopped’ at home,” said Stamm, referencing the popular cooking show where chefs create dishes from mystery ingredients. “Others say it’s like Christmas in a box because they don’t know what they’re getting. It’s a moment of joy in their day in an otherwise depressing situation.”

Stamm grew up in the offices of Katsiroubas Bros., a business her great-grandfather started in 1914. While a student at Boston College—majoring in communication at the Morrissey College of Arts and Sciences—she spent Wednesday mornings in the warehouse office in Roxbury, and a few years after graduation, she took over the company full-time with her brother, Ted Katsiroubas.

Stamm’s dedication to the family business extends to the communities it serves. In the early days of the pandemic, she drew funds from the company’s family foundation to cover the cost of produce boxes for those in need. Since then, Katsiroubas Bros. has partnered with nonprofits like Fresh Truck and the Boston Area Gleaners as well as the U.S. Department of Agriculture to bring fruits and vegetables to areas where fresh food is scarce. 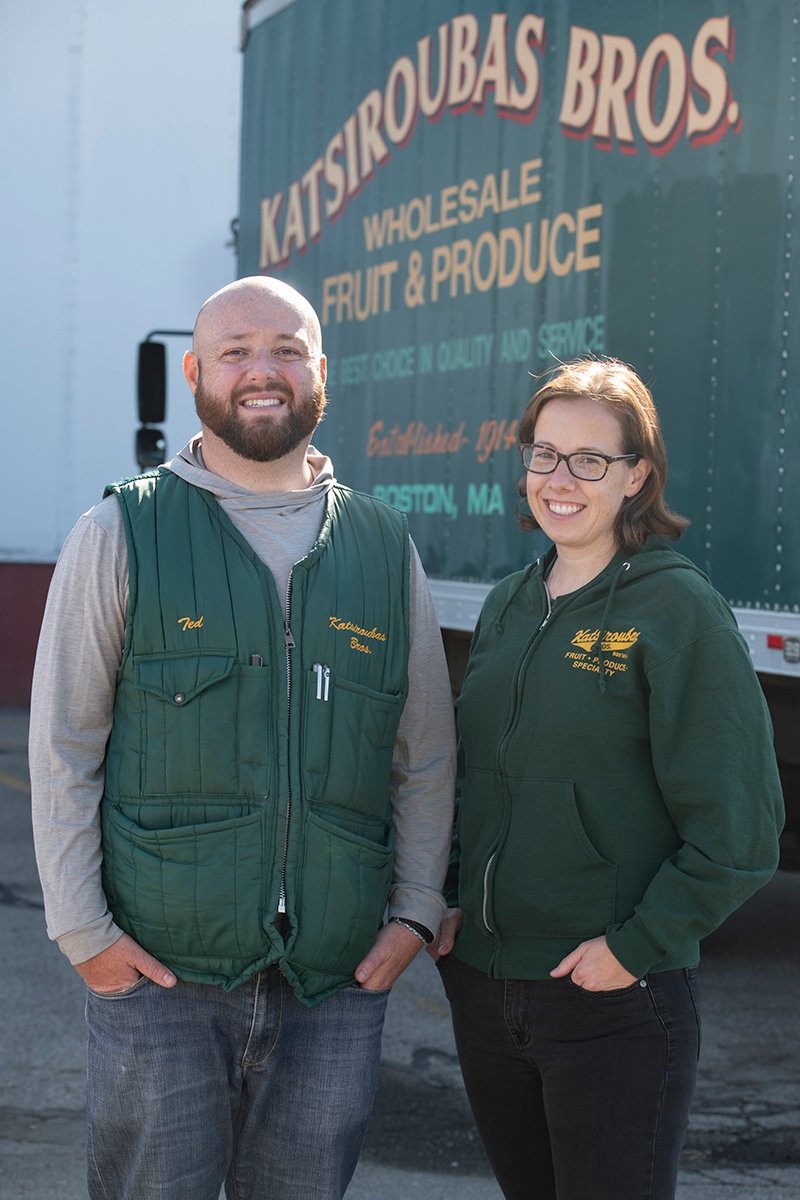 “No one should ever go hungry, I think that’s one of the most fundamental things you have to believe as a human,” said Ted Katsiroubas, who sits on the Fresh Truck board of directors. “Food insecurity is one of the most important battles that the country, and the world, faces. It’s important to me to be able to participate in that.”

Through the company’s ecommerce website, Katsiroubas Bros. customers can purchase boxes for donation to local food pantries, many of which have seen surges in demand during the pandemic. The boxes arrive pre-packed and ready to go, enabling the organizations to limit contact between volunteers and guests. Most importantly, they’re packed with food that’s nutritious and fresh, said Stamm.

“I had one person write to us and say ‘My kids got to eat grapes today instead of chips,’” she recalled. “It feels good to say, ‘We can help you, and we’re giving you produce, not a box of Oreos.’”

As a business owner, Stamm draws continuously from her BC experience, in particular the Jesuit philosophy of being a person for others. Although she majored in communications, by the time she graduated, Stamm had amassed nearly enough theology credits for a double-major.

“I feel like I became formed as a person at BC,” she said. “So much of what I learned was about relationship-building and how to help people. The reason we pivoted so fast as a business is because we knew we wanted to be the helpers in this situation.”

Since box production began, Stamm has been able to rehire many of her employees, and although restaurants have since reopened, she has no plans to abandon the side hustle. In addition to the large and small produce boxes, Stamm recently added an all-fruit box and a trio of Thanksgiving-themed boxes to the mix.

“It’s a very joyful process,” she said. “Half my business right now is something I’ve never done before, but if you’re stuck doing what you did in the past, that doesn’t invigorate you in any way. We keep thinking, what else can we do to reinvent ourselves?”