Learning from others while giving back

In December of 2017, Joseph Rizzuto ’15 stepped off a crowded bus in the Nepalese village of Gorkha, an enormous duffel bag of medical supplies slung over one shoulder. No one around him spoke English, but a young boy understood what he was looking for, and led a travel-weary Rizzuto up a dusty hill to the local hospital. Much to his relief, its door was unlocked.

It was the New York native’s first visit to the Himalayan country, where he planned to distribute supplies and perform basic health check ups, and he laughed when recalling the story of his ill-planned arrival.

“That first year I was really winging it—I’m actually amazed it worked out,” he said. “At the time I thought there was a chance I was going to end up in the middle of nowhere.”

But what began as a spontaneous stopover on his way home from medical school in Australia has turned into a passion for improving medical care for inhabitants of one of the world’s most isolated nations. Rizzuto hopes to make his third trip to Nepal this year, and is working on a paper about antimicrobial resistance in the region.

“It’s made me realize why I went to medical school in the first place,” he said. “You get so wrapped up in studying the science of medicine that you forget why you’re doing it. You have to remember the human aspect.”

Discovering a passion for service 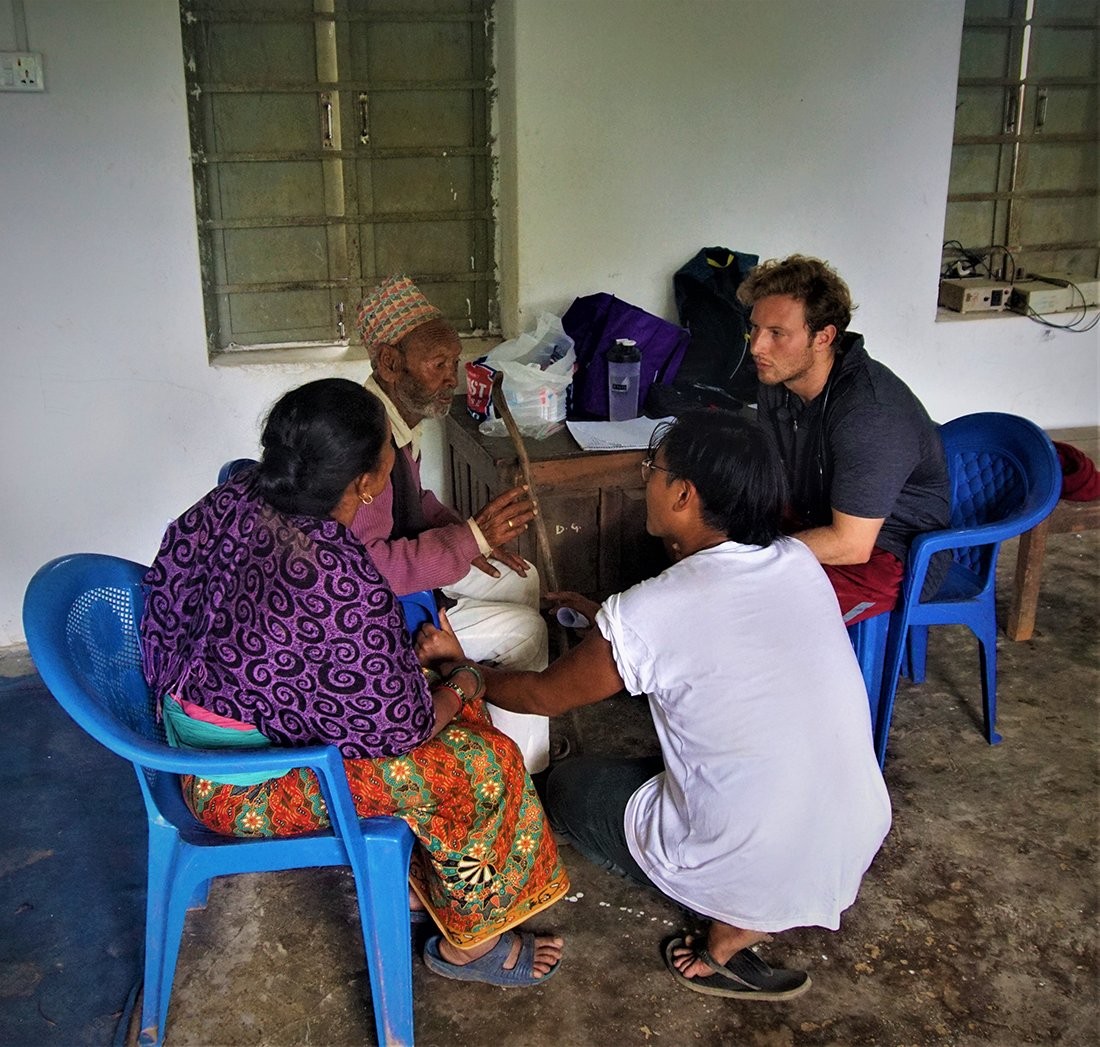 Rizzuto meeting with villagers in Nepal.

As a student in the Morrissey College of Arts and Sciences, Rizzuto took pre-health classes but found himself equally drawn to the study of philosophy. He enrolled in PULSE, a year-long course that pairs classroom study of theology and philosophy with service work at a local nonprofit, and felt energized during his work with inner city youth.

“It was really influential in changing my mindset of what is means to be men and women for others,” he said. “I realized that giving back is something that refuels me.”

After graduation, Rizzuto spent a year and a half living and working in South America before enrolling in medical school at the University of Wollongong. His first year passed quickly, and soon he was booking a plane ticket home to New York. Looking to break up the 21-hour flight, he decided to stop in Nepal.

“I knew they had an earthquake a few years back so I thought, ‘Ok, I’ll go there,’” he recalled. “I was able to contact a doctor in Gorkha, completely over the internet, and he said it would be great if I could bring some supplies.”

Rizzuto set up a fundraiser and packed a bag with as many sterile gloves and other supplies as he could carry. He distributed some at the hospital in Gorkha, and brought the rest to the tiny village of Patiswara, where medical care consists of an annual visit from a regional medical officer.

In Patiswara, Rizzuto conducted basic health checks for local residents, some of whom were beginning to struggle with Type II diabetes as a result of the recent introduction of white rice to their formerly plant-based diets. Many also suffered from heartburn, and were delighted by the antacids Rizzuto gave them.

Marks of the 2015 earthquake were everywhere in the village, with piles of rubble marking the sites of former dwellings. Rizzuto slept on the floor of a bamboo structure provided by his host, who lost his entire home to the disaster. The generosity of the villagers, who threw a feast in Rizzuto’s honor, stayed with him on the long trip home.

Armed with another year’s worth of medical knowledge, Rizzuto returned to Nepal in 2018, accompanied by a med school classmate. The pair saw patients at a rural health district office, taking blood pressure readings and providing bus fare to villagers who needed to reach a hospital. 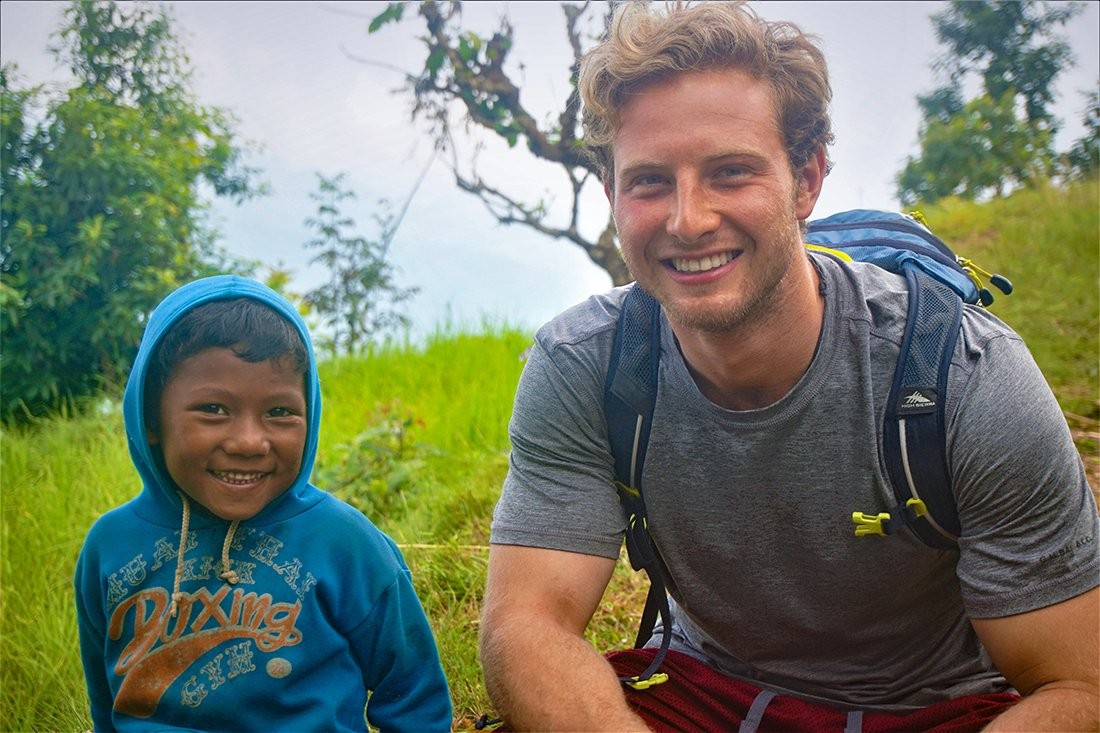 Rizzuto also began collecting data on antibiotic usage in the area, asking residents in Patiswara and the larger city of Bhaktapur to fill out a translated questionnaire developed by the World Health Organization. Due to its isolation, Nepal has been identified as having a high risk for antimicrobial resistance, a condition where bacteria no longer respond to drugs used to treat them.

“Even in the developed world, there are places where a certain antibiotic stopped working in a specific location,” said Rizzuto. “I wanted to get a sense of what the patterns were in Nepal.”

Combing through the data, he found that many Nepalese were taking drugs to combat viral gastroenteritis, commonly known as the stomach flu. This is problematic, he said, but not unsurprising—in developing countries, flu symptoms like diarrhea can lead to severe dehydration and even death.

“It’s actually one of the biggest global killers,” he said.

Aided by several classmates, Rizzuto is chipping away at an article detailing his findings, which he hopes to eventually publish in a peer-reviewed student journal.

He’s also sharing his experiences in Nepal with anyone who will listen, visiting public school students in his home district in New York with photos and stories from his trips. Several med school friends have asked to accompany him on his next journey, which he’s enthusiastic about.

“We learn a lot in medical school, but these are the things you can’t really be taught—what other people are actually living with, what their health challenges are,” he said. “It also brings you back to basics. You might not always be able to take a shower every day or have the meal you want, and I think those things are really valuable for people to learn. I know they’ve been valuable for me.”