BC composer felt 'called to write' his new work, honoring both a lost family member and an important historical event

A new electro-acoustic work composed by Associate Professor of Music Ralf Y. Gaw­lick and premiering later this month in Newton is a musical memorial to his close relative that also pays homage to a World War II milestone.

“Herzliche Grüße Bruno ~ Briefe aus Stalingrad (Best Regards, Bruno ~ Letters from Stalingrad)” is based on the final two evocative letters written by Gawlick’s 19-year-old Uncle Bruno before he was listed as missing in action in December, 1942.

Gawlick’s compositions draw inspira­tion from literary, visual, and musical landscapes in both time and place. This dialogue across centuries and among the arts informs much of his solo, chamber, orchestral, film, and vocal music. Through prominent festivals, recordings, and com­missions, his work has received national and international recognition. 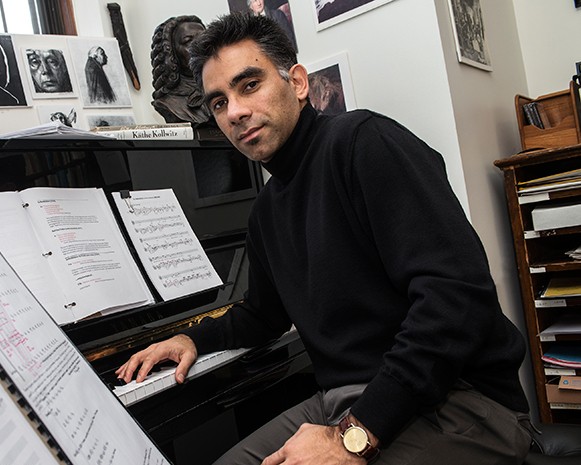 Ralf Gawlick based his new composition on World War II letters written by his Uncle Bruno.

“This piece is both highly personal and contributory to a larger commemoration: the 75th anniversary of Stalingrad,” Gaw­lick said. “In its intimacy and reflections, it constitutes a fierce anti-war memorial, which is relevant today.

“I felt called to write this work for my young uncle—to honor and preserve his memory for the entire family, and in artistic terms, to give voice to a story which tragically repeats every day. It pre­serves Bruno’s memory; its title includes his words: He signed his letters 'Herzliche Grüße Bruno [Best Regards, Bruno].’ They are also the last words spoken in the piece.”

Performed by noted musicians Bradford Gleim (baritone) and Chi-Chen Wu (piano), the piece moves the audience through time and space via a soundscape that integrates archival sound recordings with the live spoken word, two separate piano parts, and sung texts. This is the first time Gawlick, a prolific composer, has fused such elements into his work.

Of his compositional methodology, Gawlick said: “The poetic and structural constitutions of the letters translate into the work’s musical language and design. I wanted to place Bruno within a larger soundscape of the battle: This suggested the concept of an electro-acoustic montage, which is singular to my compositions to date.” 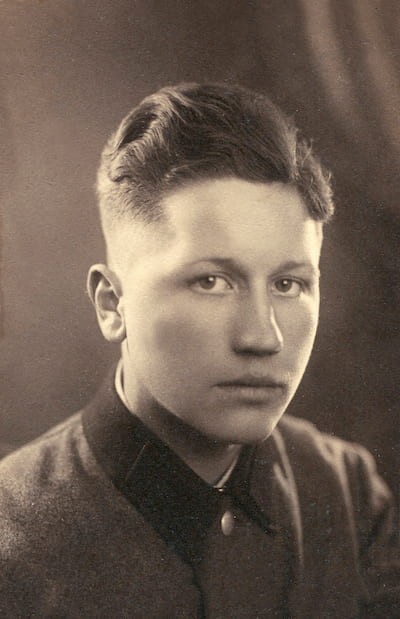 Over a two-year period of research, Gawlick tracked his uncle via the involve­ment of Bruno’s regiment in the Battle of Stalingrad. “Immersing myself into the hell of Stalingrad through archival sources and specialist literature has been heart-wrench­ing, profoundly painful and moving. Re­tracing his steps within the horror of the battle and larger socio-political cultural context has consumed me since the discov­ery of his handwritten letter in early 2017.”

The incorporation of archival sound material, Gawlick explained, is a defin­ing and essential component of the piece. The use of recorded and live piano reflects Bruno’s ability to play the instrument as a teenager; the former portrays his inno­cence before battle that recurs throughout the work like a frozen memory, the latter represents collective conscience, a sound picture of mourning. Spoken texts include Bruno’s letters in recordings of Gawlick; his 93-year-old aunt giving voice to the words of her fallen brother; and eminent Dutch baritone Max van Egmond, who was drawn to the project because he was interred as a child in a Japanese concentra­tion camp during World War II.

Sung texts include words from the Gospels of St. Matthew and St. Luke, Ezekiel, and Revelation, evoking the sol­diers’ prayers in the face of death and their collective suffering, Gawlick said. The Stalingrad soundscape—comprising six recorded excerpts, including from Göring’s January 1943 “Nibelungen” Speech, the Reich’s 1942 simulcast Christmas message, and battle sounds from World War II—is present throughout the work and is both a chronicle and agent of the musical drama, he added.

The work is recorded on Musica Omnia and Perfect-Noise, its German partner la­bel, and will be released in time at the end of March.

The work and its premiere are part of a 2018-19 cultural initiative between the United States and Germany, “Wunderbar Together,” promoted by Germany’s Federal Foreign Office and the Goethe Institut in Washington D.C., and supported by the Boston German Consulate and Goethe Institut. Gawlick received a Research In­centive Grant for the project from the In­stitute for the Liberal Arts.

The March 30 premiere is free for Bos­ton College students, faculty, and staff. Tickets for the general public are $20 and may be purchased at the door. For more information, contact Gawlick at ralf.gawl­ick@bc.edu.