On view: "American Alternative Comics" and "Photographing Chelsea in Transition"

The McMullen Museum of Art at Boston College will present two innovative and historically significant exclusive exhibitions this fall, which respectively explore important periods of change: American Alternative Comics, 1980–2000: “Raw,” “Weirdo,” and Beyond looks at a transitional time for artistic comics in America; the retrospective Arnie Jarmak: Photographing Chelsea in Transition, 1977–89 focuses on demographic and social changes in Chelsea, Mass., a city north of Boston, as witnessed and documented by the accomplished photographer. The exhibitions will be on view from September 6 through December 4.

(Members of the University community will receive an email invitation from the McMullen Museum to attend a September 14 Zoom lecture on both exhibitions by curators. The lecture will begin at 5:30 p.m.) 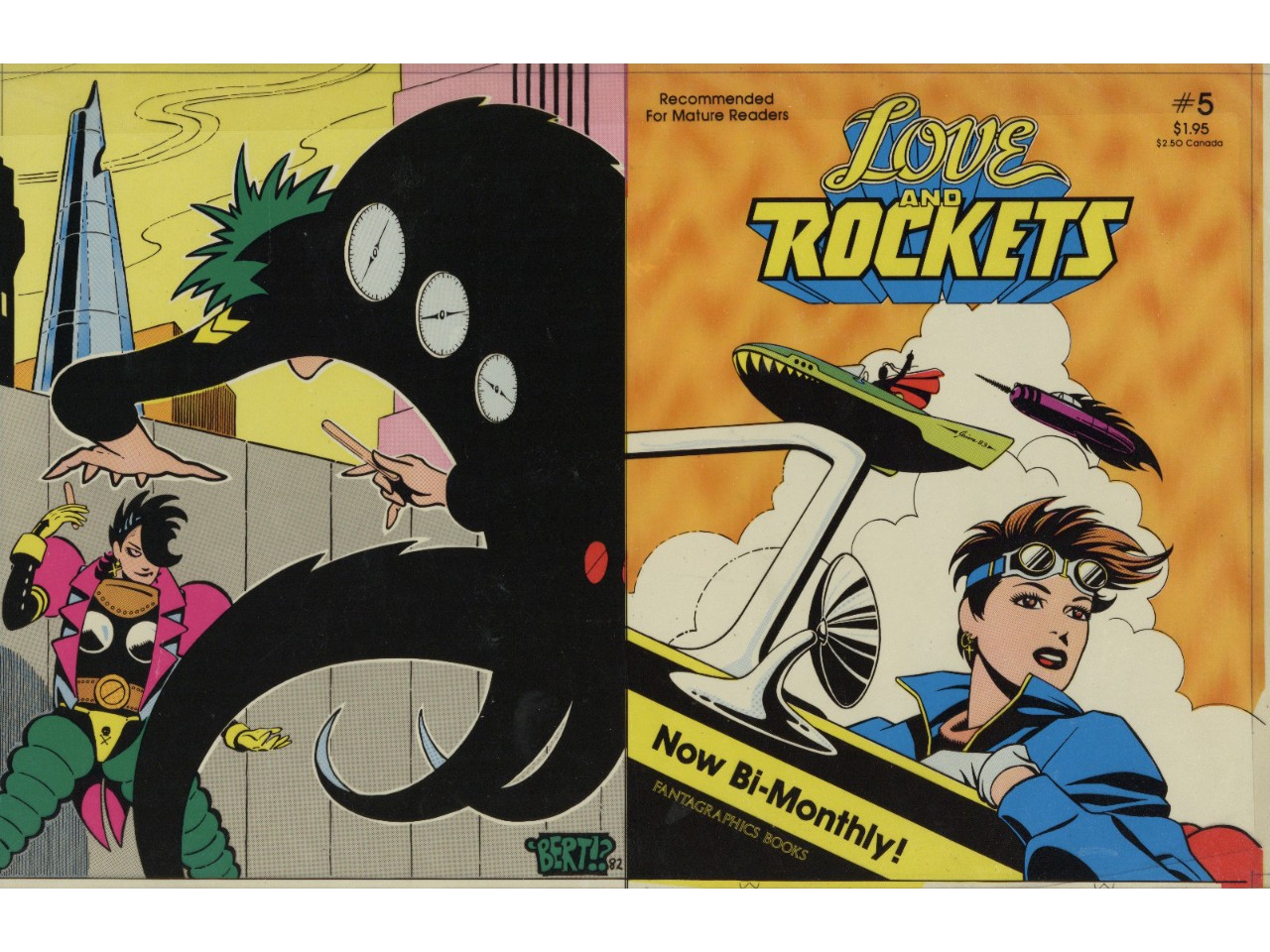 The groundbreaking exhibition American Alternative Comics, 1980–2000: “Raw,” “Weirdo,” and Beyond in the Daley Family Gallery explores the unique qualities of comics and the place of the medium in relation to art. Today, comics enjoy wide critical and academic acceptance, organizers note, but this respectability is only a few decades old. Literature classes now teach works such as Maus and Fun Home. The New York Times reviews comics and publishes comics features. Scholars work both to chronicle comics’ long history and to describe the medium’s grammar and methods.

American Alternative Comics examines the 1980s and 1990s, a transitional time for artistic comics, when cartoonists sought to enlarge the medium’s potential for artistry and self-expression. The influential magazine Raw promoted comics as ambitious, experimental art worthy of galleries and bookstores. The anthology Weirdo celebrated comics as an outsider form through self-disclosive and often self-critical narratives. A new marketplace and a new generation of publishers and alternative newspapers produced work for a growing readership. 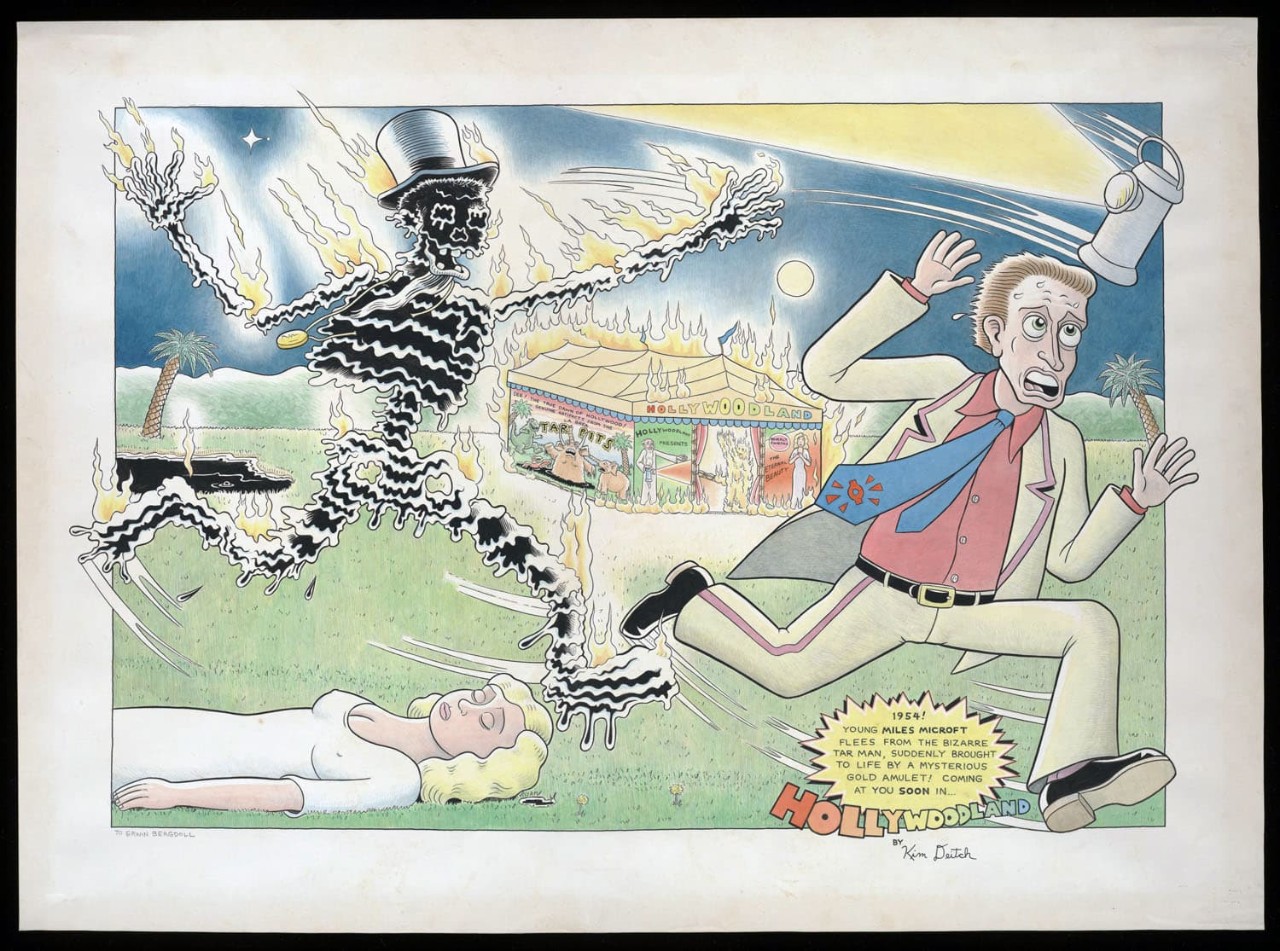 “Alternative comics are recognized as a progenitor of today’s graphic novels widely studied in literature courses throughout the academy,” said Nancy Netzer, the inaugural Robert L. and Judith T. Winston Director of the McMullen Museum and a BC professor of art history. “Featuring 40 creators, American Alternative Comics, 1980–2000 and its accompanying catalogue shift the focus to the significance of the comics’ artistic innovations, which have until now received less attention. The McMullen is grateful to the many lenders who have made this landmark exhibition possible.”

“This exhibition looks at a transitional period in the history of comics-as-art,” said McCoy. “The underground comics of the sixties and seventies had pushed boundaries of what was permissible, but their oppositional, transgressive stance had become a dead end. In the eighties and nineties, cartoonists experimented with form, content, and marketing. By 2000, comics had gained a new respectability, especially under the labels of ‘graphic novels’ and ‘sequential art.’”

The exhibition is accompanied by a scholarly catalogue edited by the exhibition curators. Essayists from art historical, literary, and other fields focus on the role of influential editors and publishers as well as the strategies artists employed to encourage readers to take the art form seriously. Subjects include the aesthetics of Raw and Weirdo, the punk-influenced work of Gary Panter, and the genre-breaking work of the Hernandez Brothers. The catalogue also includes recent annotated interviews with American cartoonist Peter Bagge and Raw publisher Françoise Mouly.

Exhibition loans were made by artists, private collectors, and The Ohio State University Billy Ireland Cartoon Library & Museum. Major support is provided by the Patrons of the McMullen Museum and Leslie and Peter Ciampi. 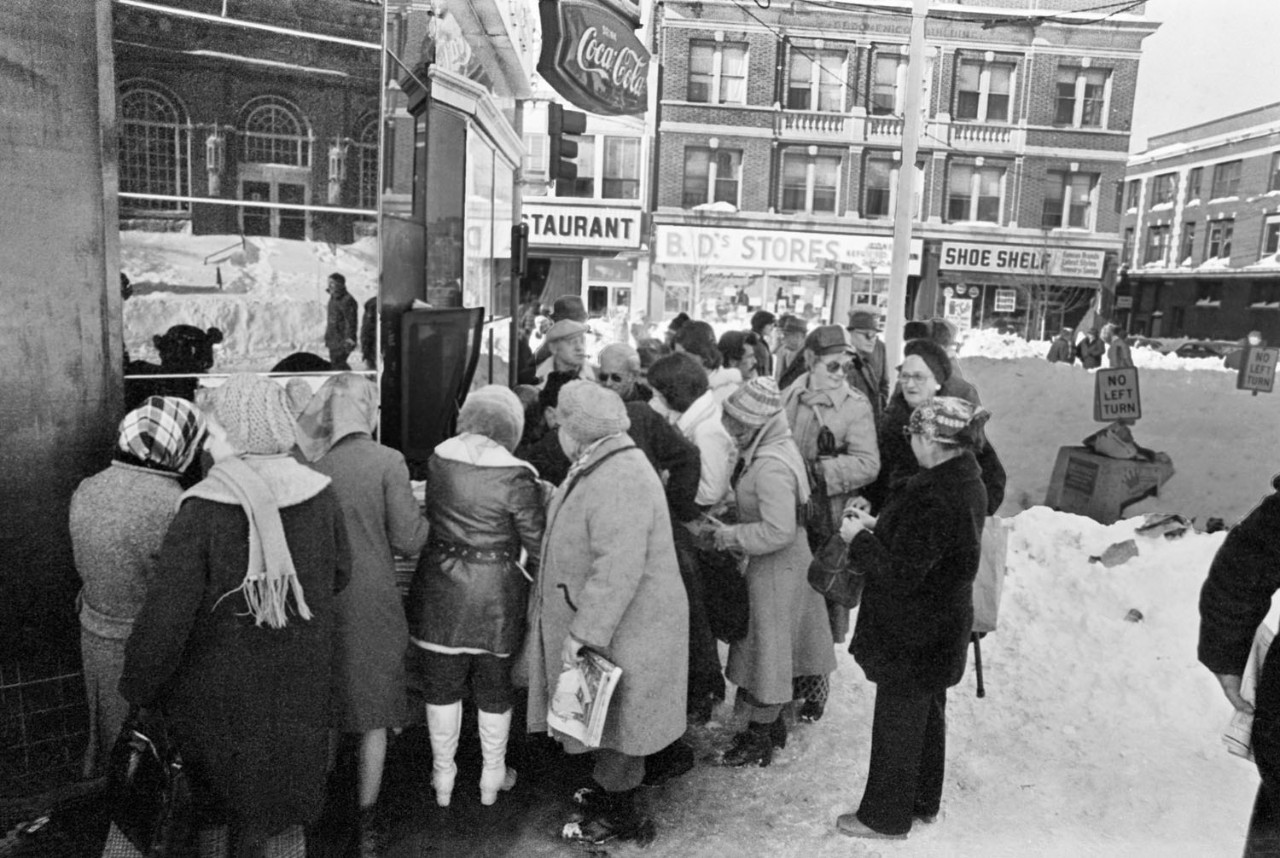 Getting the “Record” in the Square; archival pigment print © Arnie Jarmak

Arnie Jarmak: Photographing Chelsea in Transition, 1977–89 showcases the significance of the corpus of work by photographer Arnie Jarmak (b. 1949, Marblehead, Mass.), and the contribution it makes to understanding how and why local neighborhoods change. The exhibition presents more than 80 photographs from an archive of some 20,000 he produced as chief photographer for the city’s daily newspaper, the Chelsea Record, while living there in the late 1970s through the 1980s.

“The McMullen Museum is pleased to present this retrospective of Arnie Jarmak’s photographs, taken over 12 years (1977–89), chronicling the culture of the city of Chelsea for its local newspaper,” Netzer said. “Jarmak’s oral history recorded for this project and displays from his archives and of his cameras enhance the exhibition’s historical significance. The exhibition also celebrates the ongoing work of Boston College faculty and students on the digital history project, Global Boston, documenting the area’s immigrant communities since 1870.”

Among the last film photographers before the digital age, Jarmak used a Deardorff 8 × 10 inch field camera and a Nikon F 35 mm camera (both displayed in the exhibition) to document Chelsea’s notoriously corrupt politicians, the fires that raged through its aging housing stock and the celebrated firefighters who fought them, long-established businesses of European immigrants (many of them Jewish from Eastern Europe), and the arrivals of immigrants from Central America who enriched the city. Jarmak chronicles these changes in sharply observed portraits of residents, lively vignettes of the city’s youth, and illustrations of community celebrations—a testament to the central role a local paper played in the life of a vibrant and complex city, according to organizers.

“The opportunity to photograph Chelsea was truly a gift given to me,” said Jarmak. “I am thankful to the people of this city who supported and embraced my work every day at the Chelsea Record.” 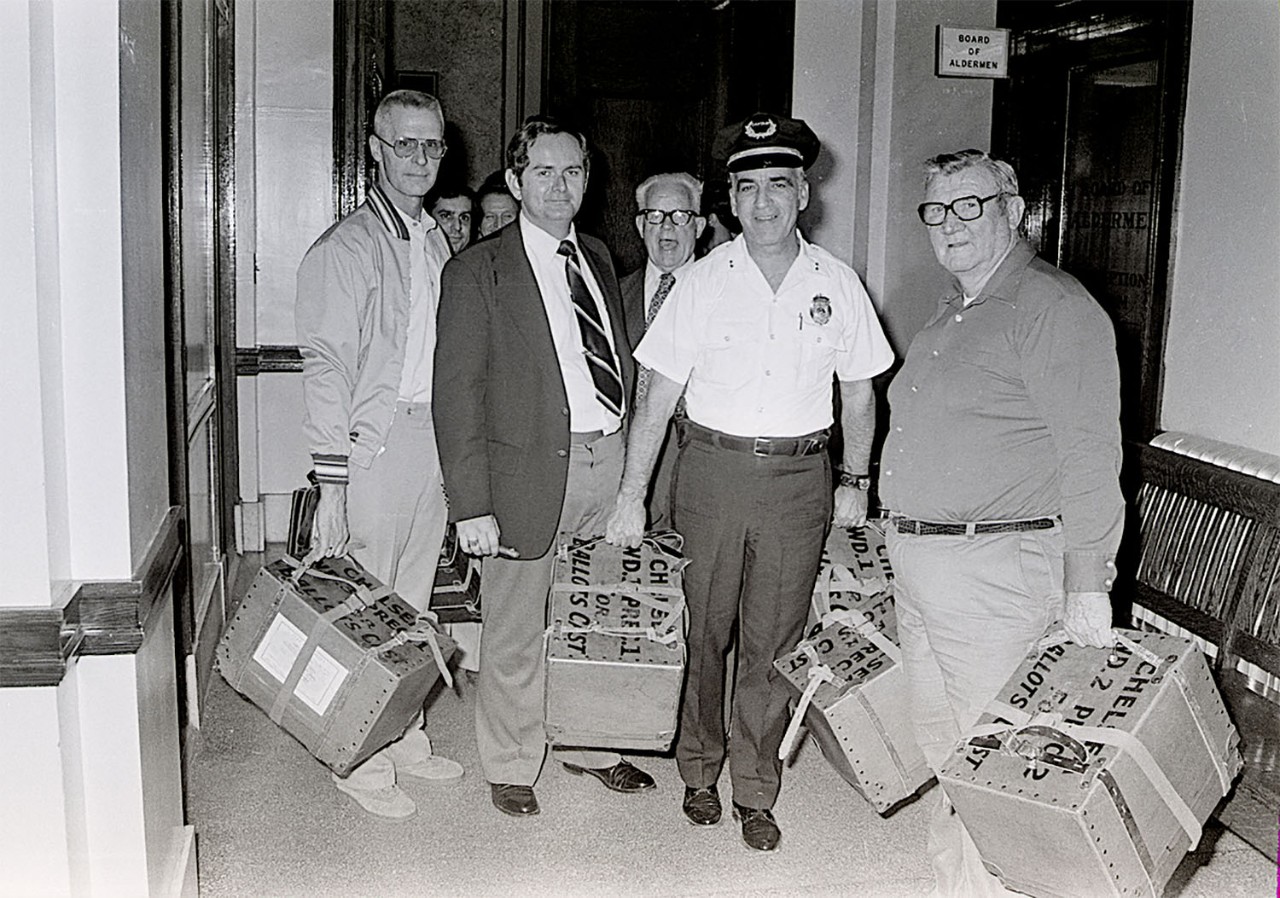 According to exhibition co-curator Ash Anderson, a Boston College faculty member in art history, “Jarmak slyly draws on the intertwined histories of documentary and fine art photography and his intimate knowledge of Chelsea to create dynamic, insightful compositions that bring to life a chaotic period in the city’s history.”

Recordings of interviews with Jarmak by co-curator Diana Larsen, a McMullen Museum assistant director, accompany the exhibition. The curators also edited an e-catalogue that includes a biography of Jarmak by Larsen, an essay by Anderson situating Jarmak’s work within the history of twentieth-century photography, including an examination of artistic and literary influences, and a study of Chelsea’s immigrant evolution and demographic transformations by BC Professor of History Marilynn S. Johnson, Global Boston director.

“Jarmak’s photographs tell a real American story,” said Larsen. “Although they represent life several decades ago, they provide a window into what is occurring in Chelsea today—the residents of a small, ever-changing immigrant city striving to succeed.”

Added Joshua Resnek, the artist’s friend and collaborator: “Jarmak has the passion of a young man and the support of a city with a big heart and soul.”

For more information about both exhibitions, hours, access, and related programs and events, visit the McMullen Museum website.

Boston Globe: Chelsea, then and now, in black and white