A prominent figure in the field of sociology, he had a particular interest in political discourse, mass media’s role in social change, and social movements

Retired Professor of Sociology William Gamson, whose use of role playing and game simulation exercises to illuminate real-life, complex concepts of social conflict paralleled his involvement in the birth of fantasy sports, died on March 23. He was 87.

A virtual service for Dr. Gamson was held March 25; a memorial shiva via Zoom is planned for after Passover. 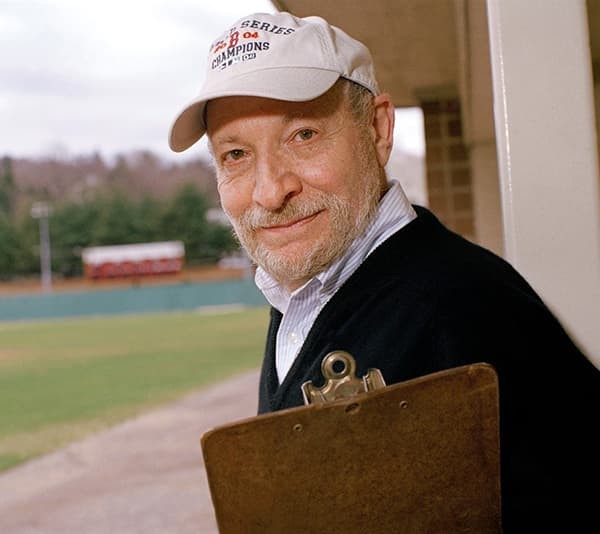 Dr. Gamson was a prominent figure in the field of sociology, serving as president of the American Sociological Association, with a particular interest in political discourse, mass media’s role in social change, and social movements. Colleagues pointed to the long list of professional and academic accolades he received over the years, including the ASA’s Distinguished Contributions to Teaching Award; the ASA W.E.B. DuBois Career of Distinguished Scholarship; the ASA Lifetime Career Achievement Award; the McCarthy Lifetime Achievement Award from the Center for the Study of Social Movements; the Eastern Sociological Society Merit Award; and election as a fellow to the American Academy of Arts and Sciences.

“Bill Gamson was one of the world's most influential social scientists,” said Sociology Professor and Chair Andrew Jorgenson. “He was an incredible mentor for both graduate and undergraduate students as well as for junior faculty, and his lifetime commitment to social justice was inspiring.”

When he arrived at BC in 1982 after 20 years on the faculty at the University of Michigan—where he earned a doctorate—Dr. Gamson already had a distinguished record of achievement, having earned a Guggenheim Fellowship and an Academy of Arts and Sciences Prize for Behavioral Science Research, and published the influential books Power and Discontent and The Strategy of Social Protest.

In particular, Dr. Gamson drew praise for his development and use of, and his writing about, simulation games to teach aspects of sociology, political science, and communication skills. In 1966, he conceived “Simulated Society (SIMSOC),” which placed participants in troubling social situations and challenged students to grapple with matters of structured social inequality and devise ethically-informed paths of collective action. “SIMSOC” is now in its fifth edition; his later creations included “What’s News” (1984), a game simulation of TV news, and “Global Justice Game” (2007).

“I’ve really been using games my whole life,” said Dr. Gamson in a 2010 interview with The Heights. “I sort of saw that as a way of holding onto childhood or extending it.”

By incorporating games into his teaching, he explained, he incorporated play into his work, thereby retaining a youthful perspective and vitality as part of his adult life. “When you’re a kid, play is part of your business. That’s what you do. You can easily lose that playfulness aspect.”

Dr. Gamson also was the namesake of Gamson’s Law of Proportionality, coined in 1971 by political scientists Eric Browne and Mark Franklin in an analysis of coalitions among European parliamentary democracies; the law was based on Dr. Gamson’s 1961 paper proposing that each actor in government expects a payoff proportional to the weight that it contributes to forming a coalition.

“Bill Gamson was for decades an animating force in the Boston College Sociology Department and the discipline of sociology as a whole,” said Professor of Sociology Stephen Pfohl, who played “SIMSOC” as an undergraduate. “His passionate commitment to making sociology a justice-oriented field of inquiry, along with his activism, good humor, and discerning mentorship of multiple generations of students will forever be a part of our department’s collective history.”

Dr.  Gamson continued to build on his accomplishments at BC. In 1986, he co-founded and co-directed the Media Research and Action Project, which works with community and grassroots organizations to strengthen progressive social movements working toward social justice and inclusive, participatory democracy. Part of MRAP’s task has been to address the lack of resources community organizations and groups experience when they attempt to change negative stereotypical images of their communities in the mass media.

In 1997, Dr. Gamson established the Media Fellows Program at BC, co-sponsored by MRAP, to assist community action groups in utilizing the media and communicating their messages more effectively.

“The program’s goal is not to do an organization’s media work for them, nor is the emphasis on skill training,” he told Boston College Chronicle. “We want participants to learn how to integrate a media strategy into their general organizational plan and, in so doing, increase their sophistication, their ability to speak for themselves.”

Dr. Gamson’s career also was informed by his opposition to war and concerns over nuclear weapons. He led a teach-in at Michigan against the Vietnam War and took part in anti-war events during the 1960s and early 1970s, including a fast with other Michigan faculty protesting the university’s involvement in military research. In the 1980s, Dr. Gamson was among a group that included his colleague, Professor of Sociology Charles Derber, collaborating on research and writing about the dangers posed by the United States’ reliance on nuclear weapons.

Interviewed by The Heights in 1984, Dr. Gamson said the U.S. had integrated nuclear weapons so completely into its defense system that any military response risked nuclear escalation. “There is a sort of set of links and you can, should—no, really have to—intervene at different points on the chain,” he said, explaining the scenario which inspired The War Chain, a working title for a publication on which the group had been working.

Dr. Gamson cited a recently authored book by the Harvard Nuclear Study Group that, in his view and that of his collaborators, espoused a tacit acceptance of nuclear weapons and had motivated the group to formulate a comprehensive view of the nuclear threat and propose steps to avoid catastrophe.

“We consider some of the views they’d say reasonable people would advocate [to be] recklessly dangerous. We’re basically trying to set the boundaries differently for this generation.”

“Bill affirmed and supported my own work, and that of others in the department, in the most generous ways,” said Derber. “He helped define the legacy of the Sociology Department, particularly his long focus on peace and social justice. He helped develop the sociological scholarship that defines the discipline's approach to social change, peace, and social justice. He will be part of an enduring legacy of great scholars and humanitarian leaders at Boston College.”

Alongside his recognition in academia, Dr. Gamson achieved renown in an improbable domain, as a pioneer of fantasy sports—a family of games in which players manage imaginary sports teams based on the real-life performance of professional athletes—and fantasy baseball in particular. Although the creation of Rotisserie League Baseball in 1980 by a group of fans, including writer and editor Dan Okrent, had often been regarded as the birth of fantasy sports, Wall Street Journal writer Sam Walker argued in his 2006 book Fantasyland that Gamson’s National Baseball Seminar he and his friends invented 20 years earlier was the “conception” of fantasy sports; Rotisserie Baseball, said Walker, was “the live birth.”

Dr. Gamson downplayed his “15 minutes of fame” in a 2006 Boston College Chronicle story, and insisted that Okrent was more deserving of credit for the idea of fantasy sports. Dr. Gamson mused on the irony of having devoted much of his professional work to devising game simulations to address weighty social issues, only to be remembered more for a game that was, in fact, just a game.

“I feel like I’ve done other things in my life,” he said, “and this is just a lark.”

“Bill was one of the most influential sociologists of his era, as his list of prizes and accomplishments suggests,” said Professor of Sociology Juliet Schor, who noted that his National Baseball Seminar is still operating. “I’ve been privileged to be part of it.”

He is survived by his wife, Zelda; his children Jenny and Josh; and five grandchildren.

Condolences may be sent to: Zelda Gamson, 1501 Beacon Street, Apt. 601, Brookline, Mass. 02446. Donations in Dr. Gamson’s memory can be made to the Social Action Fund of the Martha’s Vineyard Hebrew Center, the American Civil Liberties Union, or the Southern Poverty Law Center.