The Boston College School of Theology and Ministry celebrated the publication of The Paulist Biblical Commentary (Paulist Press, 2018), a significant new compendium of the very best in contemporary biblical scholarship, at a Dean’s Colloquium on October 25 and 26.

The 1,686-page volume, which brings together in collaboration more than 70 international biblical scholars, consists of a commentary on each of the 73 books of the Catholic canon of the Bible along with 12 general articles, written to be accessible to a wide variety of readers, especially those engaged in pastoral ministry. The PBC is based on classical approaches to Scripture, but the commentaries and articles are not limited to historical-literary issues; they also draw upon relevant theological and pastoral ideas found in the text.

The colloquium, sponsored by STM and Paulist Press with the support of Christine A. Donovan, was held as part of the School of Theology and Ministry 10th anniversary observance. 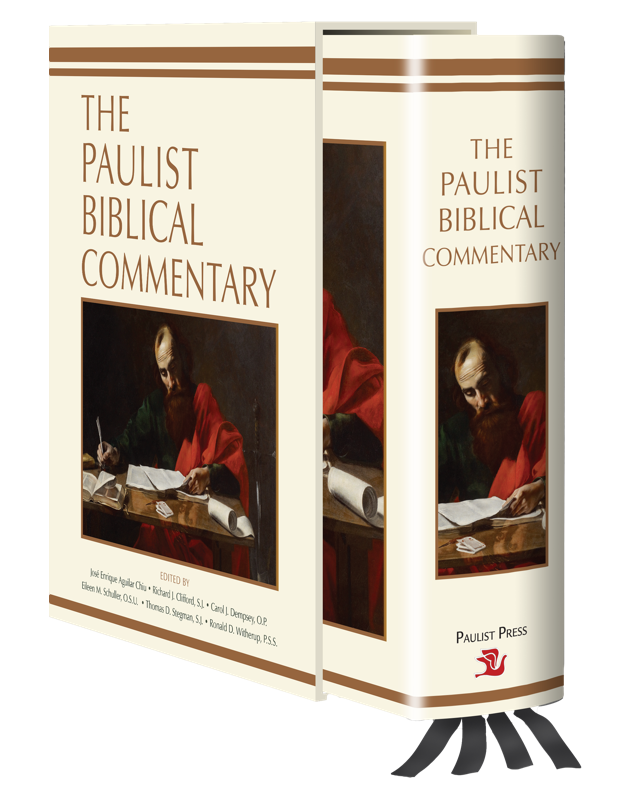 "The Paulist Biblical Commentary makes accessible the best of biblical scholarship for those who are interested in the Bible's theological, spiritual, and pastoral riches,” said Fr. Stegman, who penned the volume’s commentary on Romans.

Fr. Clifford contributed commentaries on Genesis, Wisdom, and Nahum. He and Fr. Stegman also co-wrote the general article on “The Christian Bible.”

The role of the Bible in the life of the church has undergone a resurgence in the last 50 years, according to the book’s introduction. There is renewed emphasis on the central place of the Scriptures in the church’s theology and pastoral practices. The Second Vatican Council’s document Dei Verbum (The Word of God) brought the renewal in a forceful way to the universal church. Dei Verbum includes pastoral directives for preaching to be based on the biblical texts proclaimed at the liturgy, for Sacred Scripture to be widely accessible to the Christian faithful, and for a new generation  of Catholic scholars to take up the study of the Scriptures.

This teaching “defines the purpose, guiding spirit, and rich content of The Paulist Biblical Commentary,” according to the editors.

“Drawing on excellent Catholic biblical scholarship, The Paulist Biblical Commentary helps readers appreciate the Scriptures for their daily lives,” said Fr. Clifford at the colloquium. “Almost 30 years have passed since the publication of The New Jerome Biblical Commentary. This beautifully produced new volume takes account in understandable language of the discoveries and perspectives since that time.”

“I'm very proud that the STM's biblical faculty has contributed so significantly to The Paulist Biblical Commentary, which exemplifies our mission of doing theology for the sake of ministry in and for the Church,” said Fr. Stegman.

A number of the PBC contributors spoke on their subject areas at the Dean's Colloquium. STM Assistant Professor Brian Dunkle, S.J., and instructor Matthew Monnig, S.J., served as respondents at two of the sessions. The colloquium also featured a keynote lecture, “Scripture in the Life of the Church,” by Luke Timothy Johnson, the Robert W. Woodruff Professor Emeritus of New Testament and Christian Origins at Emory University’s Candler School of Theology.

"‘The Bible in the Life of the Church’ was a wonderful way to launch this important volume," said Fr. Stegman. "It is scholarship for the Church and its ministry.”

The colloquium will be available for viewing on STM’s Continuing Education website (bc.edu/encore) after December 15.