In reimagining its annual dance performance, the BC Marching Band arranged some of its most successful collaborations to date

Few aspects of campus life remain unaffected by the coronavirus pandemic—classes are taught virtually, football games are played to empty stadiums, students wear masks to the gym—but despite necessary restrictions, the Boston College Marching Band is finding creative ways to keep traditions alive, and inspiring new ones in the process.

The band has released a two-minute music video showcasing a high-energy collaboration with the Korean Student Association’s AEROdynamiK Dance Crew. In the video, filmed by University Communications, student musicians perform a rendition of “ON” by the world-famous Korean pop group BTS, while members of AeroK and the Golden Eagles Dance Team show off hip-hop infused choreography.

Under normal circumstances, the performance would take place in Alumni Stadium, in front of thousands of fans. For the past two years, the Marching Band has been raising the bar on its halftime routine, partnering with other BC dance teams like Sexual Chocolate and BC Irish Dance to bring a unique performance to Eagles fans and their families. It’s a tradition that members of the band look forward to every year.

“Coming from a more traditional dance background, it’s always exciting to be able to incorporate different movements and styles into our routines,” said Daria Healey ‘21, a member of the Golden Eagles Dance Team. “It’s so rewarding.”

Preparation for the annual collaboration begins in the spring, and this year was no exception. Shortly after the pandemic sent students home in March, Band Director David Healey began working with musicians remotely, and when the fall semester started, the band rehearsed and recorded an arrangement of the BTS tune, all online. It took two months to produce the finished track, which is composed of digital submissions from student and staff band members, edited together.

“It's still kind of mind-boggling to me how much you can achieve digitally,” said Healey. “It isn't the same as you get in the stadium—the sound is different—but it's a really good sound.”

In August, members of AeroK, including captain Eric Meza-Ubeda ’22, began choreographing a dance routine over Zoom, exchanging videos with the Golden Eagles Dance Team along the way. They incorporated solos into the routine, to minimize large rehearsals, and met outdoors when necessary.

“Everyone was working on all cylinders at all times,” recalled Healey. “Basically we had two assembly lines working in parallel between the instrumentalists on one end and the dancers on the other.” 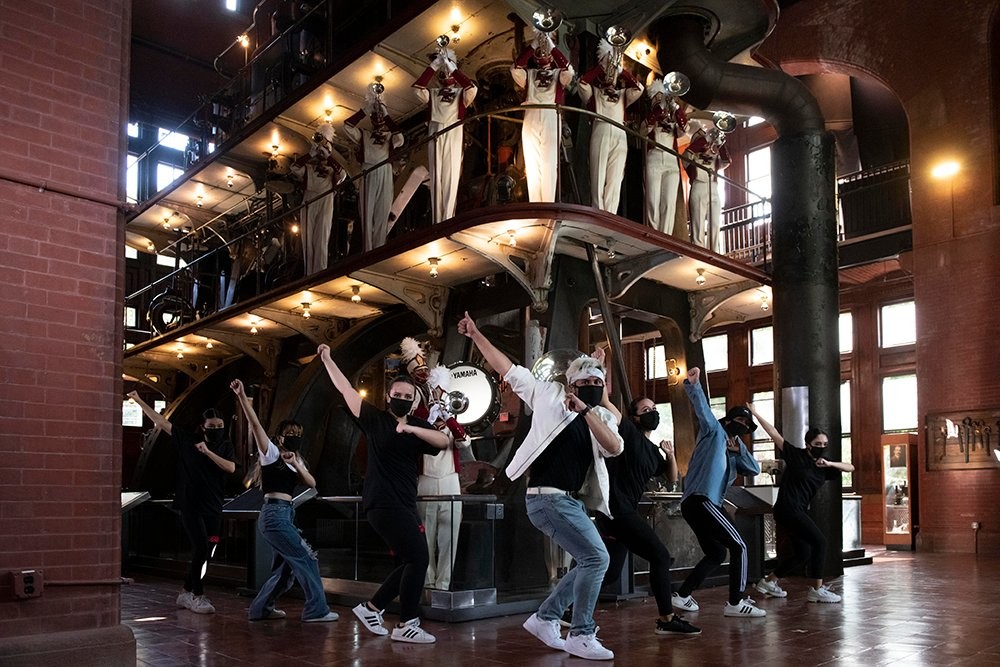 AeroK and the Golden Eagles Dance Team show off hip-hop infused choreography at the Waterworks Museum.

In early October, it was time to put the pieces together. Shooting took place at the Waterworks Museum in Chestnut Hill, an industrial space with vaulted ceilings and raised catwalks where masked musicians could safely stand while dancers performed below. The gleaming brass dials and enormous antique steam engines lent an air of drama and excitement to the grueling six-hour shoot, which tested the dancers’ stamina.

“It was exhausting but all the adrenaline kind of kept me going,” said Meza-Ubeda. “Something we talked about with the video was showing how we can come together and look at the bright side of the situation. That’s what I love about the BC community—with everything that’s going on, we’re making the best of it.”

Although no audience was present during filming (only 25 people were allowed in the space at a time due to COVID protocols), Healey and the students were aware that the video they were creating could potentially be viewed by thousands.

“We were performing for the camera and there's an authentic excitement that comes from that,” said Healey. “I think the entire day, we were just uplifted by the experience.”

In the end, performing off the football field was so successful that Daria Healey thinks it may become a tradition of its own. Similar to collaborating with groups like AeroK, performing in new spaces provides a fresh source of inspiration, she said.

“A lot of the dancers are very excited about the prospect of finding other spaces in Boston to work in,” she said. “I'm looking forward to seeing those in the future.”

Looking back, David Healey sees the project as both a test of students’ resiliency and an example of the silver linings that often accompany challenges.