Skip to main navigation Skip to main content
BC professor emeritus John Donovan at a July ceremony celebrating his appointment as a Chevalier of the Légion d’Honneur.

On June 18, 1944, less than two weeks after D-day, John Donovan and a fellow member of the Army’s 83rd Infantry Division hunkered down in a foxhole near Normandy’s Omaha Beach. Thanks to a bottle of local brandy, the pair slept soundly despite the steady roar of German planes flying overhead. When the men awoke, they discovered a huge crater where a bomb had fallen less than fifty yards away. “Neither of us knew anything,” Donovan ’39, MS’41, would humorously write years later. “We had enjoyed a Calvados sleep.”

Donovan, who passed away on August 14 at age 102, seldom spoke about the darker moments of World War II—as a child, his daughter Christine Moynihan ’73 remembers hearing about his work as a medic only when he removed splinters from her finger. (Oh, this is nothing, he would tell her.) But his bravery did not go unnoticed. In addition to receiving the Bronze Star Medal for heroism, Donovan was named a Chevalier (Knight) of the Légion d’Honneur, France’s highest honor of merit for military and civil accomplishments, in June. In a letter announcing the award, Arnaud Mentré, the consul general of France in Boston, thanked Donovan for his “personal and precious” contributions, noting, “The people of France will never forget your courage and your devotion to the great cause of freedom.”

As the war was escalating in Europe, Donovan was pursuing a doctorate in sociology at Harvard University. He could have remained safe in Cambridge—a heart murmur had excused him from military service—but, spurred by guilt and patriotism, Donovan persuaded his doctor to issue him a clean bill of health. In the winter of 1943, he put his studies on hold to join the United States Army.

For the next three years, he marched through France, Luxembourg, Belgium, and on into Germany, treating soldiers suffering from combat injuries as well as illness and infection from time spent in the trenches. After an honorable discharge in 1946, Donovan returned home to Peabody, Massachusetts, determined to move on from the war. He wanted to “unwind, relearn how to spell sociology, find a worthwhile thesis problem, and check out the [teaching] offer I had received from Fordham,” he wrote in an unpublished memoir. 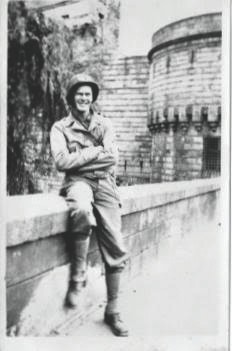 He joined the Boston College faculty in 1952 as an associate professor, and was named chairman of the sociology department (which he cofounded) in 1958. He spent the next five decades teaching and conducting research, gaining a reputation for his sarcastic wit along the way. Fellow sociology professor emeritus David Karp remembers a lunch where Donovan announced that young assistant professors would no longer be awarded tenure. “After receiving the expected looks of amazement, he revealed, to our great relief, that he was just kidding,” Karp said. Jokes aside, Karp added, “he was a superlative and caring teacher with an unusual ability to engage students.”

Allen Fairfax, MA’91, Ph.D.’06, a doctoral student at BC whose father was also in the 83rd Infantry, also marveled at Donovan’s smooth transition from battlefield to lecture hall. “You would think with what he went through he would be traumatized, but he was somehow able to not let it rule his life,” Fairfax said.

Donovan officially retired in 2002, but kept mementos of his BC days on display in his apartment (an embroidered eagle and framed print of Gasson Hall hung in the hallway) and stayed in touch with former colleagues. He spent less time recalling his years spent at war, nor did he consider his contributions worthy of recognition. When his daughter informed him of the Légion d’Honneur, he was nonplussed. “I was just a combat medic doing my job,” he said, “helping take care of the wounded guys.”