Thomas P. O'Neill learned two great lessons from his first campaign. One lesson was learned on the last day of the campaign from his high school elocution and drama teacher, a neighbor who lived across the street from his residence. On that fateful day, Mrs. Elizabeth O'Brien approached the aspiring politician and said "Tom, I'm going to vote for you tomorrow even though you didn't ask me." O'Neill was puzzled as he had known Mrs. O'Brien for years and had done chores for her, cutting grass, raking leaves and shoveling snow. He told his neighbor that "I didn't think I had to ask for your vote." She replied "Tom, let me tell you something: People like to be asked." The second bit of advice came a few days after the election from O'Neill's father. During the election, Thomas O'Neill, Sr., removed himself from his son's first election and left him to his own devices. However, after the election, he told Tip: "Let me tell you something that I learned years ago. All politics is local." During the campaign, Tip took his neighborhood for granted and did not work hard enough in his "own backyard." O'Neill took these lessons to heart. He would not hold his career aspirations over the interests of his constituents. The advice paid off: O'Neill served for fifty years in public office (sixteen years in the Massachusetts House of Representations and thirty-four years in the United States House of Representatives).

In 1937, O'Neill began his first year of public life as a Massachusetts State Representative. He ran on bread and butter issues: more jobs and decent wages. O'Neill pursued WPA funds for the creation of local jobs to cleanup the polluted Charles River and Alewife Brook. In that same year, he took an unpopular stand and voted to repeal an American Legion-backed loyalty oath that would have been required of all educators (including college professors). O'Neill felt that the oath cast doubts upon the patriotism of educators and was "an insult to some of the finest men and women I had ever known." Though the American Legion vowed to defeat O'Neill in his next election, O'Neill explained his position to his constituents and was reelected to a second term. His stand established him as an independent-minded legislator. His hard work and integrity continued to get him reelected. O'Neill also earned the respect of his follow Democratic representatives and was elected Minority Leader in 1947 by his peers.

The above is an image of a campaign card used in O'Neill's 1940 campaign. 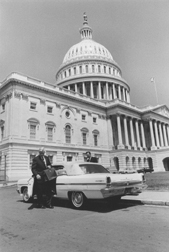 they captured 38 out of 40 GOP districts targeted by the Democratic strategy. The Democrats now held a majority of the seats (122 to 118). O'Neill became the Speaker of the Massachusetts House of Representatives.

In 1952, Congressman John F. Kennedy ran for U.S. Senate and this left his Congressional seat open. O'Neill decided to run, and won the election by a three thousand vote margin. In 1952, O'Neill was riding against the political current as the Republicans gained ground on the Democratic Party across the country. Adlai Stevenson was defeated by General Dwight Eisenhower in the race for the White House and the Republicans captured Congress. O'Neill had gone from the Massachusetts House Speakership (one of the most powerful government positions in Massachusetts) to being a freshman Congressman of the minority party. He is pictured here arriving at the Capitol with his friend and colleague Congressman Edward Boland (BC Class of 1926). For twenty years, Boland and O'Neill shared an apartment in Washington, D.C. 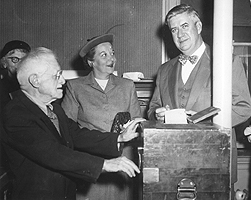 Thomas O'Neill did not take any vote for granted. He is pictured to the left at the ballot box with his wife Mildred Ann (Miller) O'Neill in the mid 1950s. Not forgetting the advice of Mrs. O'Brien, on every election, he would ask Millie for her vote. She would typically reply "Tom, I'll give you every consideration." Mildred Miller and O'Neill had been married in 1941 at St. John's Church in North Cambridge. Over the years, O'Neill always stated how grateful he was for all of the support that Millie gave him and their family of five children. In 1938, O'Neill supplemented his salary by establishing a local real estate business and would stay in business until 1971. Unlike other congressmen's families, O'Neill's family stayed in Cambridge while O'Neill was in Washington. He returned home to his family on weekends.

Listing all of O'Neill's accomplishments in Congress would be a daunting task and space only allows the listing a few highlights. In 1955, he became a member of the influential House Rules Committee. It was just one of the many committees that O'Neill served on during his years in Congress. In 1958, O'Neill and Edward Boland introduced legislation that lead to the establishment of the Cape Cod National Seashore. 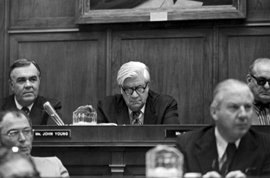 In 1970, he was a co-sponsor of a reform bill that ended the practice of unrecorded voting in the House. Congressmen would now be accountable to their constituents for their actions. In 1971, O'Neill became the Majority Whip and was now part of the House leadership. Two years later, he became the majority leader. The Majority Leader is shown here (right) serving on a congressional committee in a photograph taken by House Photographer Dev O'Neill (no relation to Tip) in 1973. In 1974, O'Neill played a key role in managing the Nixon impeachment proceedings.

In 1977, O'Neill became the Speaker of the House of Representatives. He held the position until 1987. This was the longest continuous term of the Speakership in the nation's history.  One of his most important actions in Congress was to open the House to live television coverage (CSPAN) beginning in 1979. In the 1980s, O'Neill spearheaded the Democrats' efforts to hold the excesses of the Reagan Revolution in check and to prevent massive scale backs of social programs for the nation's aged and less advantaged citizens. The Speaker felt Reagan did not have a firm grasp on domestic affairs and once characterized the popular president as a "Herbert Hoover with a smile." For these efforts, O'Neill was vilified as a "tax and spend liberal" by the Republicans, the conservative press and even some of his own constituents. Also to the displeasure of the Reagan administration, he was horrified by the atrocities committed by Contra rebels in Nicaragua and sought to limit U.S. funding to these groups. O'Neill did not run for reelection in 1986 and retired from public office in January 1987.