Steve Pemberton ’89 discusses The Lighthouse Effect, his new book about the mentors, teachers, and friends who selflessly guide us along life’s voyage.

In 2012, Steve Pemberton ’89, H’15, M’19, P’23, published A Chance in the World, an acclaimed memoir chronicling his journey from a childhood spent in cruel foster homes to an adulthood of happiness and success. With its messages of resilience, faith, and family, the book became a best-seller and inspired a 2017 movie of the same name. In September, Pemberton released his follow-up, The Lighthouse Effect: How Ordinary People Can Have an Extraordinary Impact in the World. In the new book, Pemberton writes about what he calls “human lighthouses”—the mentors, teachers, friends, and colleagues who selflessly guide us along life’s voyage. I spoke with Pemberton recently about the book, the people who helped him to become the man that he is today, and whether the lighthouses among us can lead the nation to a more unified tomorrow. Our conversation has been lightly edited for clarity and length.

Your new book is about the people we encounter who believe in us, mentor us, and help us. You call them “lighthouses.” Why is that?

The lighthouse serves no purpose other than to be of service to someone else, especially in times of uncertainty or great difficulty. There are more than 22,900 lighthouses across the world, but they all have a very similar mission, and that is to guide the journey of the voyager. The lighthouse is humble, it is steadfast, it seeks no reward, requires no recognition, and you cannot pay it. The best elements of the lighthouse are also the best elements of humanity.

Like your first book, The Lighthouse Effect is deeply personal.

In the book, I write about ten people who were lighthouses to me, whose lives or stories I encountered along the way. The very first one I write about is John Sykes. He’s the high school teacher who took me in when I was 16 years old, three days after Christmas, and I literally had nowhere to go. I wanted to share not just his story, but what it was about him that compelled him in that moment to put a pause on his life to take in this young boy who for all intents and purposes had been cast off into the shadows of society. At the time, I had a lot of doubts about what my possibilities were, and he in many ways guided my path.

How did he do that?

In my childhood, I found myself in these very, very difficult foster homes, where I had no memory of family. I had been forgotten about, quite literally, by my mother and father. I had questions of value and worth that any child would have in that situation. John’s magic was to let me know that the struggle, and my ability to stand up through that struggle, should not be a source of doubt for me, but actually should be a source of strength. Unfortunately, we lost John earlier this year, but his magic will always be with me. 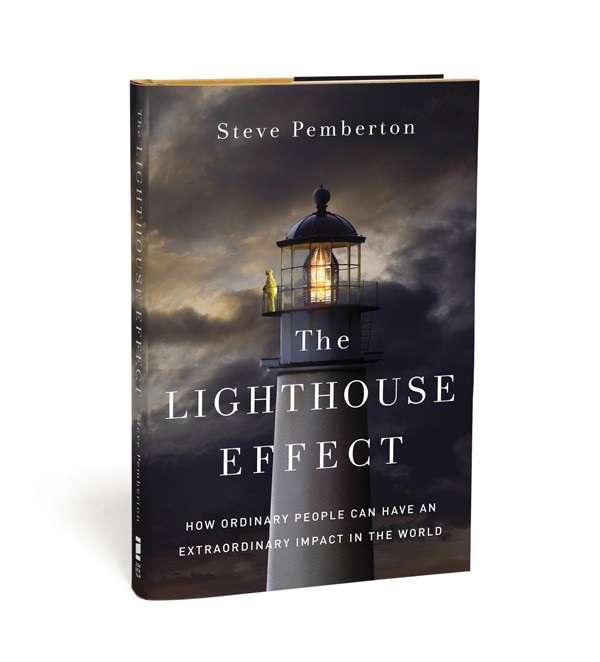 What inspired you to write The Lighthouse Effect?

One of the driving factors was the response to the first book. A Chance in the World just found an audience and continues to find an audience, largely because, although I didn’t see it this way at the time, I was writing this universal story of family and faith. And one of my biggest takeaways from the response to the book was how many seemingly ordinary people are out there in the world whose lives, to me, are instructive for all of us. You begin to ask yourself this question of, Who are we following and who should we be following? What I’m trying to suggest in the new book is that it’s the everyday people. The ones who drive our children to school, who stock our grocery shelves in the midst of a pandemic, who check us in at the nurse’s office. Their lives and the lessons of their lives are so powerful for us, and we need not cede heroism to the celebrity and the well-informed. That’s not to say there aren’t heroes in those places, but that’s not the only places where they are.

You argue in the book that this kind of leadership can bridge the divides we have in America right now.

Yes, and isn’t that one of the magnificent attributes of the lighthouse? When it sees you in the middle of a storm, it does not ask how you came to be there. It doesn’t question your navigational skills, it doesn’t point the finger at you and say, “Didn’t you know better?” It does not care about your race, your gender, who you voted for in the last election. In other words, a lighthouse sees your humanity first and it also sees your uncertainty and says, “I can guide you to safe harbor.” People are just like that. The most impactful people in our lives are the ones who have done that for us, which is why we remember them as fondly as we do.

You write about one such woman, Carmen Ortiz-McGhee, who wasn’t even aware of the effect she had on you.

I bumped into Carmen on a train while I was writing my first book. I’m explaining the book and I said, “I’m trying to write about parents I never knew.” I said something to the effect of, “Does that make any sense?” I believed that, well, of course it wouldn’t because everybody knows what it is to have parents. But she said in response, “Well, actually, it does.” Because a few years prior to that she had met her father for the very first time. And rather than being angry or bitter about his absence in her life, she had understood the difficulties of his life, and they formed a wonderful relationship. What she didn’t realize is that she made me revisit how I saw my mother and father, who, in all candor, I probably had not completely forgiven for what had unfolded in my childhood. But she had no idea she was doing this—she’s telling me this story, her reunion story of her father, and she has no idea that I’m processing it that way until some time later.

So the lesson is that even when we’re not actively focused on mentoring or helping, we can still have an effect on people in the world?

The lesson is that your life experience is enough to be a lighthouse, just as it is.

I think their motivation is based on a belief that somehow their life journey might actually be able to help somebody. Each of the individuals I write about in the new book suffered in some way. They lost a child. They lost a parent. They were battling addiction. Welles Crowther lost his life.

Welles Crowther ’99 is certainly an inspiring example of the lighthouse effect. How did you get the idea to include him in the book?

Welles embodies the lighthouse attribute of selflessness. It is important for us to keep telling his story, because it will never not be necessary. He had already saved himself during the September 11 attacks, and he could have kept going down the stairs of the World Trade Center tower. But he didn’t. He ran into this lobby where there were people who didn’t know the way to safety, and he said what the human lighthouse always says: “Follow me. I know the way.” He brought people to safety, and again he had the opportunity to say, “I did my part, I saved those people.” But he didn’t do that. He went back up again. He saved, we believe it was eighteen lives. He was 24 years old. I never met Welles, but there isn’t a time that I tell the story that it doesn’t choke me up. Why can’t we all be a bit like Welles, knowing full well that most of us are never asked to sacrifice what he did? We’re not asked to make those kinds of tough decisions, but he was, and he answered not just selflessly, but without even a moment of hesitation.

You have now written two books. What else are you involved with?

There’s my family, of course, my wife, Tonya, and our children, Quinn, Vaughn, and Kennedy. So family keeps me busy for sure. Then I run global human resources for a company called Workhuman. Prior to that I was in senior HR roles at Walgreens and Monster.com. I am enjoying this particular stage of my journey.

The focus of much of your work has been helping corporations diversify their workforces.

For much of my career, that was certainly the case. That’s not the primary thing that I do today, but it is an element of it. I have always thought that the ideals of this country are big enough to be inclusive, and I think we’ve been at an inflection point these last several years that’s forcing us to ask some much harder questions about that. This idea, somehow, that the ideals of the nation aren’t big enough to include all people who love this country and who serve it and are great contributors to it—that should not be part of our tradition, but there are loud voices suggesting that very thing, as we see on a near daily basis. So it’s left to us to decide how we are going to find that more common story.

What is the role of our corporations and our institutions in that effort?

Well, I would tell you that in May of 2020, the murder of George Floyd created a major inflection point in this country. It was a line of demarcation for corporations specifically. That was the point where corporations acknowledged that they had a particular responsibility to address inequities in our society, and systemic inequity specifically. Do they have a fiduciary responsibility to shareholders? Yes, they do. And to the markets? Yes, they do. But they have a responsibility to society as well. Whether it is inequities in policing, or health care, or housing, you’re seeing companies leaning into this and doing so rather unapologetically.

So corporations and institutions can be lighthouses, too?

I believe so, and I would suggest that the lighthouse effect is a way to find our more common story. Boston College is a wonderful example of that. I come from the African American tradition, and there are tenets of that culture that are also tenets of the Jesuit expression, and that is faith and service. The lighthouse effect to me is finding
that connection between those two worlds that can advance us toward a greater good. So despite it all, I still am incredibly hopeful and optimistic. I think history shows us that we’ll bend toward the greater good, even if we have moments of doubt.