A participant in the 2014 Mod 500 tricycle relay around the Mod pathways.

It's a Mod, Mod World

Photos: Courtesy of The Heights 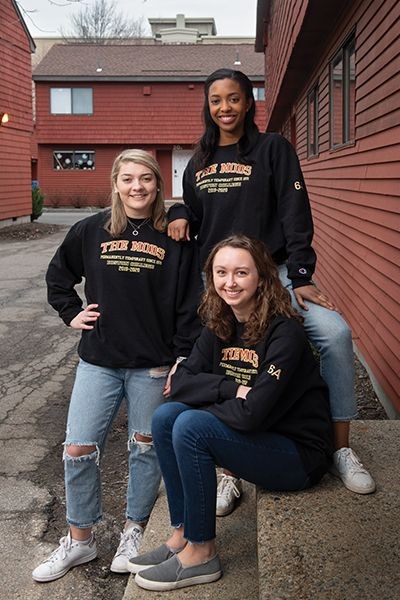 Each year, students vote on a slogan for the official Mod sweatshirts. Clockwise from left, former Mod 6A residents Sarah Marchese ’20, Kaelin Bush ’20, and Natalie Hoy ’20 show off last year's version, which proclaimed: “The Mods: Permanently Temporary Since 1971.” (When the duplexes opened in 1970, the Class of 1971 were the first seniors to live in them.)
Photo: Peter Julian

Modstock—the annual spring concert held in the Mod Lot—is a relatively recent tradition. Here are just a few of the big-name artists who’ve helped students celebrate the end of classes over the years (remember Sugar Ray?).

It seems that everyone’s favorite temporary houses are safe for now: “There are no plans in the immediate future for removing the Mods,” said Greg Jones, director of housing operations. But if the Mods eventually do meet the wrecking ball, it will be a shame. Though I missed out on living in one, I spent lots of 1998 in their tight confines. If I close my eyes, I can still smell the stale beer and hear the bad late-’90s music turned up loud enough to shake the stuffed, sweaty building. And I can’t imagine BC without that. ◽

More Memories from the Mods