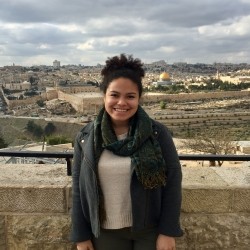 My name is Solina Jean-Louis and I am a junior double majoring in German and International Studies. In my International Studies major, I concentrate in Ethics and International Social Justice, so when I got the opportunity to take a course on the conflict in Israel and Palestine, I jumped at the chance. Through this course, I had the opportunity to travel to Israel and Palestine for two weeks, visiting religious sites, ethnically cleansed villages, and speaking with UN officials, human rights activists, and normal residents of both Israel and Palestine. It was through this course that I got the idea for my Aggad Fellowship—to conduct research on the Israeli Separation Wall and protest art featured on the wall, and compare it to the Berlin Wall, since I am currently studying abroad in Berlin.

The Israeli Separation Wall is about twice as long as the internationally recognized border between Israel and Palestine since 1949. According to the Israeli government, the official purpose of the wall is to promote Israeli security. However, many opponents of the Separation Wall believe that the Israeli government seeks to annex Palestinian land (85% of the wall deviates from the Green Line, causing many restrictions for Palestinians traveling within the West Bank). These opponents believe that the wall is a physical manifestation of illegal Israeli expansion.

Many people compare the Israeli Separation Wall to the Berlin Wall, and the destruction of the Berlin wall in 1989 is seen as a monumental moment in modern history. In 2009, President Barack Obama spoke about the tumbling of the wall, saying: “There could be no clearer rebuke of tyranny…or stronger affirmation of freedom.” Ironically, despite his comments about the illegality of Israeli settlements, Obama authorized the largest military aid package in American history for Israel. As a form of protest and expression of emotions pertaining to the injustice created by the existence of this separating structure, many artists have spray painted images, words, and stories onto this wall. The breadth of this protest graffiti has become a global phenomenon and the Israeli Separation Wall itself has been called “the world’s largest protest graffiti.”

After visiting both walls and analyzing the graffiti found, I noticed a major and very telling difference between the two. While the Berlin wall murals on the East Side Gallery focus largely on peace, the graffiti on the Israeli Separation Wall prioritizes the need for justice. In 2017, we find ourselves over two decades away from the fall of the Berlin Wall, and the injustices that occurred to those living in East Germany are to many a very distant memory or history lesson. In Israel and Palestine, the conflict and injustice is very much still alive, and the fight for justice is being waged every day. When looking at the graffiti calling for peace on the Berlin Wall, I remember what a Palestinian man said to me: “It is easy to think about peace, but in order to have peace, justice must come first.”