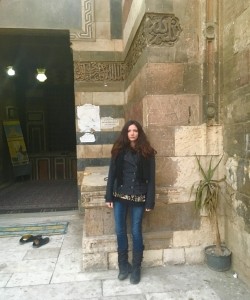 For my thesis research, I chose to investigate the relationship between art objects and architecture in Medieval Cairo under the Mamluk Sultans (1250-1517 CE). As Turkic military slaves, the Mamluks set up a unique system of rule in Cairo and shaped its skyline as the ‘City of 1000 Minarets’. From the first time I visited Cairo in 2010, I was fascinated by Mamluk architecture, particularly the vast crumbling city of tombs that winds through the old city’s heart. My time at BC has given me a greater understanding of Middle Eastern history, culture, and religions, providing context for my focus on art and architecture. It has exposed me to trends in scholarship in the field of art history and related disciplines, leading me to my current study. Receiving the Omar Aggad travel grant gave me the chance to revisit and photograph the monuments and objects included in my research, and to fulfill my dream of visiting the Islamic Museum, just reopened in January 2017.

While a great deal has been published on Mamluk arts and architecture, scholarship has tended to consider art objects outside of their original architectural context. Mamluk religious foundations, the primary focus of my study, were once filled with a stunning variety of specially commissioned fixtures and furnishings. The buildings act as meeting places for stone, glass, metal, textiles and book arts, facilitating cross media exchange. By examining the relationship between commissioned art objects and their original setting, I wanted to explore ideas about intent and design processes. Mamluk art historians have tended to focus primarily on motivations related to politics and conspicuous consumption but in some cases context implies alternative objectives. Prized or luxurious items, elaborate decoration, and inscriptions were often placed in tomb chambers or other areas where access was restricted, suggesting they play a more ritualistic role.

While the removal and strict categorization of objects by size, media, and type is necessary to a certain extent for preservation, curatorial, and scholarly purposes, it distorts any sense of the original function and aesthetic. Seeing one mosque lamp at eye level in a museum case has a very different visual impact than seeing fifty or a hundred suspended from a vast iwan. Recording and presenting objects in an artificial way exaggerates the role of the viewer and magnifies details that may have been invisible when objects were in situ. Over categorizing objects in scholarship obscures the fingerprint of medieval artisans, who worked in multiple media and different scales. Signatures reveal the same artist sometimes made objects that art historians would otherwise consider completely unrelated.

My time in Cairo has given me the amazing opportunity to visit Mamluk foundations I’ve included in my writing for documentation purposes. Because many of the prayer halls are still in use today, their interiors are constantly shifting. Some of the furnishings recorded in recent photographs have since been stored or removed. This adds to my perspective of Mamluk architecture as living institutions where the desire for historical authenticity must be balanced with the practical needs of the community.