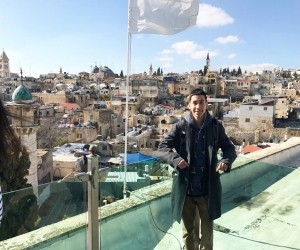 Over the 2016-17 winter recess, I traveled to Israel/Palestine (I/P) on a ten-day trip of academic immersion. With help from the Omar A. Aggad grant, I pursued a comparative study on peacemaking in Israel/Palestine and Colombia. Both countries, as may or may not be readily known at a glance, share a common story: both are experiencing intractable civil wars of measurably long duration; both have engaged in a number of peace processes between vying parties; and both involve the United States to a substantial degree. To investigate these and uncover other similarities between the two countries’ conflicts, I spoke with a variety of figures in I/P. Among these were transnational activists, including Omar Barghouti, founder of the global “Boycott, Divestment, Sanctions” (BDS) movement of Palestinian resistance. To witness the day-to-day lives of Palestinians and Israelis, I visited Jerusalem, Wadi al-Na’am (a Bedouin community in the Negev), Nabi Saleh (a Palestinian community adjacent to an Israeli settlement called Halamish), Skyped with students in Gaza, as well as visited the Israeli cities of Jaffa and Tel Aviv.

This empirical in-country experience, coupled with subsequent literature review, yielded several lessons regarding peacemaking in Israel/Palestine and Colombia. Central among these is the presence of an embedded “political economy of war” or permanent war economy in both countries that hampers the success of a peace process. Specifically, both Israel and Colombia have developed perverse conditions in which parties (the government and insurgents alike) have begun to profit financially from war, violence, and illegal activity. This has served, furthermore, to sustain a cultural psyche in both countries such that civilians themselves begin to normalize circumstances of violence (e.g., occupation/settlements in I/P and peasant displacement in Colombia). On the whole, this formative experience has the generous Omar A. Aggad grant to thank.