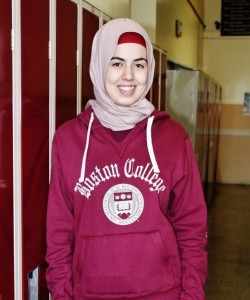 E.G. Koç was recently awarded a Boren Scholarship to study in Bosnia. Boren Scholarships are funded by the National Security Education Program (NSEP), which provides opportunites to undergraduate students to study regions and languages deemed critical to U.S. interests.

She was born in Kazakhstan, where she spent much of her early childhood. She moved to the United States when she was in the 4th grade. She is a double major in Slavic Studies and Islamic Civilizations & Societies.

Below is a brief interview that ICS conducted with E.G.

I’ve been living in NJ since the 4th grade. BC had always been a really good school, close to home for me. However, by senior year, I had friends in many different universities and hearing their college experiences really had me thinking seriously about which college to go to. A friend of mine at BC gave me a tour of the main campus and talked a lot about the education, environment, etc. The spiritual aspect of the curriculum especially interested me. In the end, I applied through early action and was accepted by December, and BC has been my school ever since.

What is your major and minor?

I want to work in the State Department for the Bureau of European and Eurasian Affairs.

What are the Boren Awards?

The Boren Awards is a scholarship funded by the Department of Defense through the National Security for Education Program (NSEP). The scholarship is given to students to study traditionally understudied languages that are of importance for national security. The Boren Scholarship is for undergraduate students, while the Boren Fellowship is for graduate students. Upon graduation, there is also a one-year government service requirement that the awardees have to complete.

What is the application process?

One first has to know which language one wants to study, in which country, and through which school/program. In the application, there are two essays. In the first essay, the applicant has to make a case for why the language s/he wants to study is important for national security and how s/he will use this language after attaining it. The second essay is more technical and asks to write about the program/school one will learn the language through. One has to also receive recommendation letters from at least two professors. Throughout the entire process, the campus representative for the scholarship guides the applicant and works with him/her to perfect to his/her application. In my case, this was Christina Hatzipetros from OIP, and I am grateful to her for all of the guidance and help she provided. A few weeks before the final deadline, there is also an interview conducted at the applicant’s school and the results of this interview are also submitted alongside the application.

What will you be doing with the award?

I will be studying Bosnian in Bosnia and Herzegovina, in the capital city Sarajevo. My program will last 7 months (spring and summer semesters) and my program consists of mostly intensive language studying. It has been my dream and goal to become fluent in Bosnian since high school.

I lived in Kazakhstan before I moved to the US in fourth grade. All of my cousins/relatives live in Turkey so I go there every few summers to see them. I also went to Bosnia for two months last summer, and took classes at an American university, interned at an NGO, and studied the language.

I want to travel throughout all of the Balkans! My maternal grandparents were originally from Serbia and Montenegro, so I definitely want to see those countries. Macedonia and Bulgaria are at the top of my Balkan travel list however. They just seem really interesting. I also want to see Russia and recently I’ve taken an interest in Azerbaijan. Prague is also at the top of my list of Slavic cities to see. Then there are what I call “cliché” touristy places in Western Europe that I definitely want to see. And this list will go on and on, but I should probably stop here.

I’m fluent in English and Turkish and have been studying Russian and Bosnian.