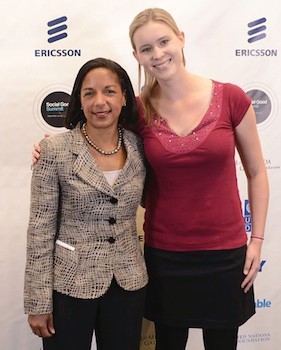 It’s not often that the United States adds a college student to its delegation to the United Nations – in fact, it had never happened before. But 2012, Boston College student and member of the ICS program, Brooke Loughrin, ’14, was selected as the first-ever U.S. Youth Observer, making her the first youth to join the U.S. Delegation to the United Nations. As a Youth Observer, Brooke attended events in NYC during UN General Assembly week, as well as a number of events concerning the UN’s Social, Humanitarian, and Cultural Affairs Committee. In addition, she will travel to speak at UNA-USA Chapters around the country, blog, tweet and discuss her experiences with the general public, and advise UNA-USA on potential future youth roles at the UN.

“The U.S. Youth Observer program represents an unprecedented investment in the future of America's youth and will help lay a solid foundation for youth engagement in international affairs for years to come,” Brooke explains, asserting that “in today's increasingly interdependent world, it is critically important that youth be engaged in issues beyond their borders. The UN is the world's most important voice on international cooperation, and having youth represented at the UN helps ensure that the issues that most impact young people are addressed.”

When she’s not bumping elbows with world leaders, Brooke spends a lot of time traveling the world. Through Boston College, the ICS program and other grants, she has been able to study abroad in places as diverse as Dushanbe (Tajikistan), Dakar (Senegal), Istanbul (Turkey), and Visakhapatnam (India).  The ICS program has also presented her with the opportunity to refine her numerous language skills (including French, Persian, Turkish, Mandarin, and Spanish). When asked about what aspects of the ICS program Brooke most enjoyed, she pointed to the publication of Al-Noor: “One of my motivations for entering into public service is to promote broader public understanding of the Middle East in order to facilitate more informed conversation about a fraught, fractious and fascinating region. The mission of Al-Noor, which means “the light” in Arabic, is to inspire such a conversation by illuminating the diversity of cultures, histories and perspectives that comprise the Middle East. During my freshman year, as head of the Freshmen Leadership Project, I decided that one way our publication could address cultural illiteracy about the Middle East and Islam was to design a High School Outreach Program. As Editor-in-Chief, I have also had the opportunity to develop practical skills for a career in public service, including managing the Al-Noor budget, leading a staff of 30+ editors, representing Al-Noor at MESA conferences in Washington and Denver, hosting guest speakers from the Middle East, and corresponding with our contributors and subscribers.”