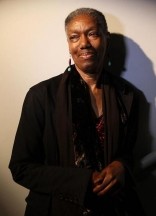 Robbie McCauley is an OBIE Award playwright for Sally’s Rape, and an internationally recognized performance artist and director. Her most recent play, Sugar, directed by Maureen Shea at ArtsEmerson in Boston received wide critical acclaim,and for her performance an IRNE Award.

Directing credits include Adrienne Kennedy’s Sleep Deprivation Chamber at Penumbra Theatre Co in Minnesota, and Janet Langhart Cohen’s Anne and Emmett at the Jack Morton Theater in Washington D.C. and at Roxbury Repertory Theater in Boston.

Acting credits include For Colored Girls Who’ve Considered Suicide When the Rainbow Is Enuf on Broadway, and Fences at the Tyrone Guthrie in Minnesota.

She toured with The Arts Company and with New Performance Video as writer and performer in cities across the country and abroad facilitating dialogues on race between local whites, blacks, and other ethnicities.

Widely anthologized, including Extreme Exposure; Moon Marked and Touched by Sun; and Performance and Cultural Politics, Robbie McCauley recently retired from the faculty of Emerson College, which conferred on her Professor Emerita.