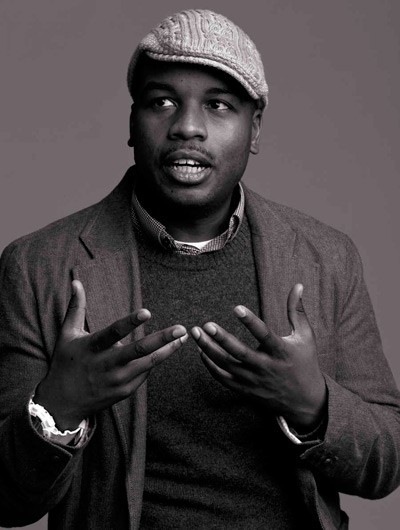 Playwright Marcus Gardley will give a lecture in the Matthew R. DeVoy and John H. DeVoy IV Perspectives on Theatre Series on Thursday, October 11, 2018. The event will start at 7:00pm in the Robsham Theater Art Center.

Described by the New Yorker as “the heir to Federico Garcia Lorca, Luigi Pirandello, and Tennessee Williams,” Gardley’s plays have been produced at some of the country’s most renowned theaters such as Arena Stage, Berkeley Repertory Theatre, Lincoln Center Theater, and Yale Repertory Theatre, among others.

In 2009 Gardley was named one of “50 to watch” by The Dramatist magazine. He is the recipient of the PEN/Laura Pels award for Mid-Career Playwright (2011), which honors a “playwright whose literary achievements are vividly apparent in the rich and striking language of his or her work.” He is a former United States Artists James Baldwin Fellow (2012) for Theater and Performance, which recognized him as one of “America’s most accomplished and innovative artists.” He was also the 2011-2012 Aetna New Voices Fellow at Hartford Stage which provides “an artistic home for important playwrights of diversity and color.”

Gardley’s work- which often centers on African American history and allegory-  challenges audiences by tackling complex social and political issues. He views his work as a form of activism, and has stated that he “can’t tell a story if there isn’t a political point.” In a 2015 interview with the National Endowment for the Arts (NEA), Gardley affirmed that “What I intend for [the plays] to do, is cause conversation. From that conversation, [I hope] people are not only inspired to see more theater, but also inspired to do things in their community, so that the work is actually causing a spark for change.”

Winner of the 2010 Edgerton Foundation New Play Award, a nominee for the Steinberg New Play Award, and a nominee for the Charles MacArthur Award for Best Play, Gardley’s play Every Tongue Confess depicts intergenerational tales of loss and redemption in the town of Boligee, Alabama by intertwining biblical stories and events from the town’s own history. In 2014, his play The Gospel of Lovingkindness won the Black Theater Alliance Award (BTAA) for best play/playwright. Inspired by true events, …Lovingkindness is a drama about faith, family, and loss at the hands of gun violence.

In The Road Weeps, The Well Runs Dry, the myth, folklore, and history of the Black Seminole people emerges in the first all-black U.S. town in Wewoka, Oklahoma. Following its premier run at South Coast Repertory Theatre, The Road Weeps… had a national tour and became a finalist for the 2014 Edward M. Kennedy Prize for Drama Inspired by American History, which honors “a new play or musical each year that enlists theater’s power to explore the past of the United States, and to participate meaningfully in the great issues of our day through public conversation.”

Gardley’s play, The House That Will Not Stand, which recently opened off-Broadway at the New York Theatre Workshop in July 2018, earned him the 2014 Will Glickman Playwright Award and was a finalist for the 2015 Kennedy Prize. Regarding the world premiere production of The House That Will Not Stand at Berkeley Repertory Theater, Artistic Director, Tony Taccone, stated: “Marcus’ unique voice- at once lyrical, rigorous, and humorous- gave us a look at a little-known part of our history, and the result was compelling and illuminating.”

The Front Porch Arts Collective Executive Director (and this year’s Rev. J. Donald Monan S.J. Professor in Theatre Arts), Maurice Emmanuel Parent, and his professional partner, Front Porch Artistic Director Dawn M. Simmons, started the non-profit in early 2017 with an opening season that included a 7-part reading series of Gardley’s plays, including the works The House That Will Not Stand, Dance of the Holy Ghosts, and Jesus Moonwalks the Mississippi, among others. "Marcus Gardley’s work is both relatable and sublime,” says Parent. “He blends magical realism with the particulars of the Black experience in a way that is impactful to members of our community and speaks to the essential humanity of all people.”