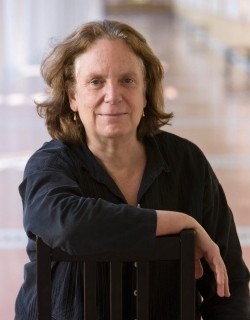 Chestnut Hill, MA (April 1, 2014) -- The Boston College Theatre department is pleased to announce that stage director, educator, essayist, and theatre visionary Anne Bogart will give the inaugural lecture in the Matthew R. DeVoy and John H. DeVoy IV Perspectives on Theatre Series on Wednesday, April 30, 2014. Bogart's presentation—titled "What's the Story: the role of storytelling in the theater of the 21st century and beyond"—will take place at 7:00pm in Gasson 100 at the center of Boston College's main campus.

Anne Bogart is one of three Co-Artistic Directors of the SITI Company, the innovative ensemble theatre that she founded with Japanese director Tadashi Suzuki in 1992.  The SITI Company's mission focuses on the creation of original theatre work, professional performance training, touring nationally and internationally, and collaborating with leading artists and writers from other disciplines. Bogart has directed the vast majority of SITI Company creations, including three productions seen in the Boston area: The Trojan Women (After Euripides) (2013) and Café Variations (2012), both presented by ArtsEmerson: The World on Stage, and Marivaux's La Dispute (2003) at the American Repertory Theatre, for which she received the Elliott Norton Award for Outstanding Direction.

Bogart and the SITI Company's most recent project is Steel Hammer, a collaboration with Bang-on-a-Can composer Julia Wolfe and four playwrights based on the folk legend of John Henry.  Steel Hammer received its world premiere at the Actors Theatre of Louisville's Humana Festival of New Plays in March 2014.

Bogart is also a Professor in the School of the Arts at Columbia University, where she heads the MFA graduate program in Directing, and the author of several widely read books about creativity and theatrical process, including And Then You Act (2007), The Viewpoints Book (with Tina Landau) (2004), and A Director Prepares (2001).

Anne Bogart is the inaugural speaker in the new Matthew R. DeVoy and John H. DeVoy IV Perspectives on Theatre Series, a program made possible by a generous gift from the DeVoy family of Newton, Massachusetts. The series will bring leading professionals and major creative forces in theatre and the performing arts to Boston College on an annual basis to share their experience and their vision with the campus community and with interested alumni and members of the greater Boston arts community.

"There is no better person than Anne Bogart to launch the DeVoy Perspectives on Theatre series," says Scott T. Cummings, Chair of the Boston College Theatre department. "As director, teacher, author, and instigator of collaborative conversations, her influence on the American theatre is profound and wide-ranging. What she is thinking about is always of interest."

Bogart's DeVoy lecture at Boston College is based on her forthcoming book from Routledge, What's the Story: Essays about art, theater and storytelling, which is due for release within days of her talk at BC. In chapters with such one-word titles as "Spaciousness," "Heat," "Error," and "Sustenance," Bogart explores how contemporary theatre artists can renew their connection with the primal impulse to tell stories as a way of making sense of the world. Her thoughts derive from her extensive reading in neuroscience, sociology, and performance theory, as well as her 35 years of practical experience as a theatermaker.

Bogart's distinguished career in the American theatre has included a year as the Artistic Director of the Trinity Repertory Theatre in Providence, Rhode Island (1989-90); a term as President of the Theatre Communications Group (1990-92); and teaching appointments at New York University's Tisch School of the Arts and the University of California, San Diego. She is the recipient of numerous awards and accolades, including the Doris Duke Performing Artist Award, the Rockefeller Fellow from the USA Artists Foundation, a Guggenheim Fellowship, the Career Achievement Award from the Association for Theatre in Higher Education, two Obie Awards, and a Bessie Award. She is a graduate of Bard College (B.A.) and New York University (M.A.).