The Performance and Production Program 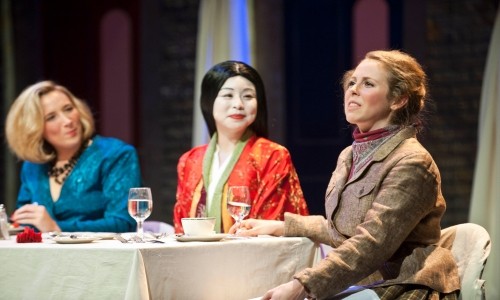 The Theatre department regards participation in production and performance as an essential extension of the ideas and the practices introduced in the curriculum. Theatre majors are expected to get involved, as a way of honing skills and gaining practical knowledge about theatrical process.

Participation in Theatre department productions is open to all Boston College students, majors and non-majors alike. Those whose interest in theater is more extra-curricular are welcome. For more information about how to get involved contact any faculty member or a student on the Council of Majors & Minors or check out the callboard in the back hall of the Robsham Theater Arts Center. Also watch out for the sign-up for production labs at the beginning of each semester.

The Department, in conjunction with the Robsham Theater Arts Center, produces an annual season of six plays, four mainstage shows directed by faculty or a distinguished guest and two "workshop" productions directed by students. Each season is planned to provide students with a variety of creative opportunities and theatrical challenges. View list of past Theatre department productions.

Casting in Theatre department productions is open to the entire campus community and, with rare exceptions, is based on audition. The Department is committed to a policy of diversity and inclusivity in casting, which means that students of color and students with disabilities are encouraged to audition and will be considered on the basis of merit without regard to race or ethnicity.

Rehearsal schedules are determined by the director of each individual production, in consultation with the Department Chair and the Director of the Robsham Theater Arts Center. Generally a production will rehearse four-six times a week for four-six weeks. Student actors are not necessarily called for every rehearsal. Rehearsals are in the evening on weekdays and during the day or evening on Sunday. Minor conflicts can often be accommodated if communicated far enough in advance. View detailed set of rehearsal guidelines.

The Department's "workshop" productions feature sets, costumes, lighting, and sound designed by students. Students who sign up at the start of the term can get one credit for working on preparation or running crews for Department productions. There are also a few paid positions in the scene and costume shops.

Two of the Department's six annual productions are directed by students. Every other year, the Department produces an evening of original student-written plays under the umbrella title "New Voices." And once or twice a year, a student dramaturg works on a mainstage production.

The Theatre department conducts most of its activities in the "Robsham," the home of theater production on campus since 1981. The building contains two performance spaces, a 591-seat proscenium theater known as the "Mainstage" and the Bonn Studio Theater, a flexible black-box theater that accommodates 150 spectators.

There are many student-run performing arts organizations on campus, including the Dramatics Society and Contemporary Theatre, two longstanding student theater groups that produce a play or a musical at least once a semester. The Musical Theatre Wing is known for producing cabarets and reaching out into the city of Boston with them.