Bringing science to the community through targeted outreach activities is a vital extension of education and research in the chemical sciences at Boston College. Chemistry outreach conveys the excitement of discovery that is at the heart of scientific inquiry and that serves as a catalyst for learning. Chemistry outreach aims to demystify science through hands-on experiments that encourage learners of all ages to make connections and to see possibilities. We are proud of the creative outreach initiatives of our faculty, post-doctoral staff, and students. We invite you to visit these at: 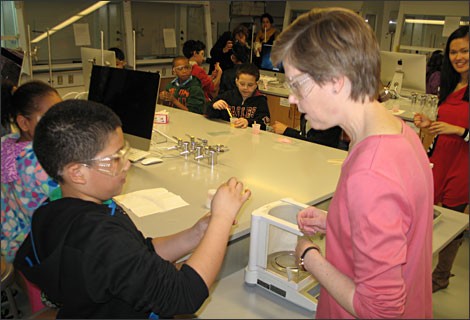 Chemistry Department Outreach partners with the Lynch School of Education

The Chemistry Department has partnered with the Lynch School of Education Urban Outreach Initiative to bring elementary school students into the lab to experience the magic of chemistry. Professor Lynne O’Connell, Director of Introductory Laboratories, led the students in an experiment. By crossing linking the polymer in glue with borax and adding a few drops of food coloring the students produced Flubber, much to their delight. 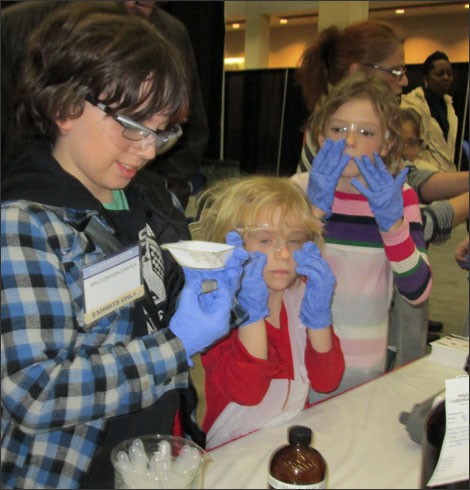 Family Science Days, a free event open to the general public, is a yearly production of the Annual Meeting of the American Association for the Advancement of Science (AAAS).

During this year’s event, Boston College chemists put on a stage show called “Chemistry Magic” that left no seat empty in the Hynes Convention Center Exhibition Hall. In the form of skits, faculty members and graduate students demonstrated polymer synthesis, visible effects of chemical reactions (release of gas and change of color), and chemical kinetics. In one of the skits, under the demands of a customer, a bartender successively changed water into “wine”, “milk” and “beer” by pouring the liquid from one glass to another. In another skit, a genie showed off his grandfather’s “clock in a flask” (iodine clock reactions).

At their exhibit booth, the enthusiastic children were provided with hands-on experiences by the following research groups:

Making magnetic nanoparticles and moving them around with magnets.

Uusing lamps to power toys with solar panels and playing with a hydrogen-powered toy car.

Seeing wild type and mutant C. elegans (or “worms” to the kids) under the microscope.

According to AAAS, 3,647 people registered for this year’s Family Science Days (not including conference attendees or media that may have stopped by). 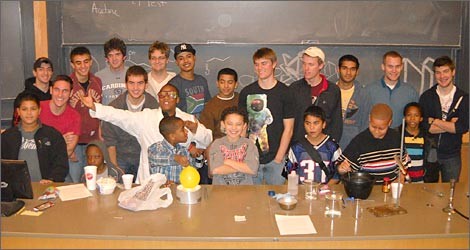 A Big Show By Big Brothers

In December, Professor Jason Kingsbury and undergraduate researcher Julian Ponsetto (BCC’12) created a Chemistry Activities Day for underprivileged Boston youth. Julian, a junior major in the Chemistry Honors program, became a Big Brother his freshman year at Boston College. The Big Brothers (and Big Sisters) program matches young adults with ‘at risk’ children in the greater Boston’s public school system. A pairing begins as a simple friendship and can evolve into a trusted partnership in which the mentor helps to foster the child’s interests and reinforce positive behaviors. When they first met, Julian’s Little Brother Charlie was eleven, and Julian took Boston transit once a week to visit him at school during a lunch hour. The positive influence on Charlie was expected, but reciprocal benefits for Julian were less foreseen. Julian has been amazed at how much he shares in common with Charlie in spite of their different backgrounds. He has been inspired by Charlie’s determination and resolve despite the unique challenges of growing up and attending school in the inner city.

This year, several Boston College Big Brothers worked with the University’s Volunteer and Service Learning Center to create a program for Little Brothers from Roxbury and Dorchester to visit with their Big Brothers on-campus. A Chemistry Activities Day was planned. In what amounted to a magic show orchestrated by Julian at the front of the large lecture hall in Merkert, the teams of Little and Big Brothers were witness to live demonstrations of reactivity and basic chemical principles. Professor Kingsbury was on hand to encourage each student to formulate a working hypothesis before each ‘trick’ was performed. One of the experiments that caught everyone’s attention was the disappearing cup. When styrofoam is immersed in acetone it completely dissolves! Fortunately, a large enough supply of cups was on hand to keep the excitement at a high level. The day was great fun and a huge success. 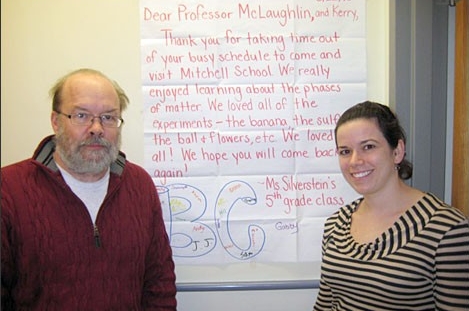 When his children were growing up in Dover, Massachusetts, Professor Larry McLaughlin visited their school to give science demonstrations to son Martin, daughter Mareika, and their classmates. Professor McLaughlin is still reaching out to young people today - most recently at the Mitchell School in Needham, Massachusetts, where he and 4th-year graduate student Kerry Salandria presented a demonstration on the phases of matter.

Professor McLaughlin and Ms. Salandria are shown next to an over-sized thank you note written by Ms. Silverstein's fifth grade class and proudly displayed outside of Professor McLaughlin's office at the Merkert Chemistry Center. Professor McLaughlin attributes his success in engaging young students to the "wow!" factor - a surefire way of making learning science exciting and fun. Professor McLaughlin's love for his work - as both scientist and educator - undoubtedly inspired his own children to pursue careers in those fields. Martin (BC Chemistry '02) received his Ph.D. in Organic Chemistry from Yale University ('10), and Mareika (BC '05) is pursuing a Master's in Education (ESL) at Boston University. 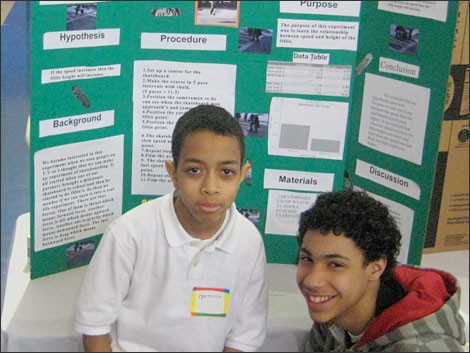 Members of Professor Paul Davdovits's research group recently helped organize the first-ever middle school science fair at the Orchard Gardens Pilot School in Roxbury, Massachusetts. Orchard Gardens, a K-8 school, was one of four Boston public schools awarded a GEMS (Gelfand Endeavor for Massachusett Schools) grant from the Gelfand Family Trust. The goal of the GEMS program is to excite, engage, and motivate students through inquiry-based learning. One of the primary objectives of this program is to establish and improve science fairs in the public schools. Dr. Eben Cross (Ph.D.'09), who led the outreach project, worked with a team of colleagues from Boston College and MIT to support the middle school students through the months leading up to the event. Team members from the Davidovits Lab included Dr. Andrew Lambe, Adam Ahearn (B.S.'09), and David Croasdale (BC'11). On 27 January 2010, 237 students - representing 95% of all the students from grades 6 through 8 - presented 107 projects in the first ever Orchard Gardens Science Fair. Each group presented their work to four different scientist/judges, and 15 projects were selected to represent Orchard Gardens at the regional science fair held at Northeastern University in March. On the evening of the science fair, over 350 parents and students crowded into the gymnasium to view the projects. The fair was a huge success. Dr. Cross is the Camille and Henry Dreyfus Environmental Chemistry Postdoctoral Fellow in the Department of Civil and Environmental Engineering at MIT.