bc home > Centers > boisi > Past Events > Spring 2002 > Current page: The Struggle for the Soul of Islam: Inclusive and Exclusive Tendencies Since September 11

The Struggle for the Soul of Islam: Inclusive and Exclusive Tendencies Since September 11 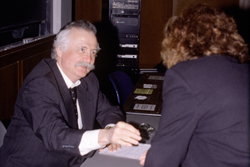 Michael Sells, a noted scholar of Islam and Professor of Religion at Haverford College, asserted in a March 13 lecture at Boston College that what the Taliban and other conservative Islamic movements are really fighting is a war against the television set, and what it represents: a culture of global advertisement and the idolatry of images. It was no accident, he argued, that the September 11 attacks were “choreographed” to ensure that the second plane crashing into the World Trade Center would be captured on television. This was part of Osama bin Laden’s plan to defeat the United States by what he believed was Americans’ enslavement to images.

Sells sought to convey a sense of the ideology motivating radical Islamic groups, and to contrast these movements with the much broader Islamic cultural tradition that is often hidden behind its politicized face. While some interpret the actions of groups like the Taliban, and the attacks of September 11, as a vindication of the “clash of civilizations” theory, Sells argues that the theory offers too limited a view, because it fails to recognize that elements of Islamic culture have something to contribute to the West.