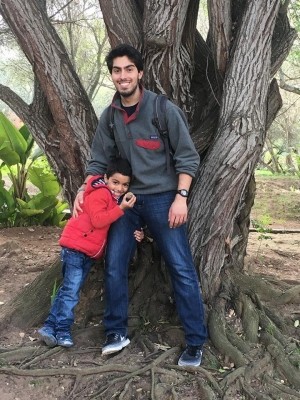 I am from White Plains, NY, and I attended the Hill School in Pottstown, PA before I arrived to Boston College last spring. I chose BC for a number of reasons, namely its Jesuit Catholic identity and its location in the Boston area. When I visited BC during my senior year of high school, I greatly admired how friendly its students, faculty, and staff were. I found that many undergraduates were very service and volunteer-orientated, seeking to pursue long-term careers in service of others. I believe this is a true testament to BC’s Jesuit, Catholic mission. Furthermore, BC’s location in Boston—the ‘Athens of America’—was something I could not pass up. I was attracted to the idea of pursuing an internship in downtown Boston, taking a course at another institution, or collaborating with other student organizations at Harvard, BU, Northeastern, Tufts, and others. It’s something I brag about as a tour guide in BC’s Admissions Office!

What is your major and minor at Boston College? What made you choose them?

I am currently double majoring in Political Science and Islamic Civilization and Societies at BC. Since the start of high school, I became very interested in Middle Eastern culture and politics. I read extensively about our nation’s involvement in the Iraq War and its effects on the region. In addition, my background as an Iranian-American motivated me to learn more about my cultural heritage, as well as Iranian politics. While I entered BC as a Political Science major last fall, I realized that adding an ICS major would allow me to focus my studies more closely on the Islamic world—a subject that deeply interests me. The ICS major is also an interdisciplinary program, which gives me the unique opportunity to interact with professors and faculty from a number of different academic departments on campus. In short, I find that both of these majors overlap exceptionally well.

Where did you travel with your Mizna funds and how long were you there?

I traveled to Rabat, Morocco during our last Winter Break and spent two weeks there.

Why did you choose Morocco?

I chose to volunteer in Rabat, Morocco under the support of UBELONG, a nonprofit organization based in Washington D.C. UBELONG offers year-round volunteer opportunities in numerous locations across the world, including Morocco. I heard many great things about Morocco—both from a tourist and academic perspective. Young students in Morocco are terrific language learners, given their ability to grow up speaking both Arabic and French. Similarly, I felt that Morocco would be an excellent country to begin my travels in the Islamic World. Unlike other Islamic countries, Morocco has a distinct European identity and culture, which helped ease my transition into this region.

What did you do while you were there?

During my two weeks in Morocco, I volunteered as an English teacher at an after-school center in Salé, Morocco (the city adjacent to Rabat) and conducted research on the country’s educational system. When I was not teaching, I arranged opportunities to meet with local teachers, students, and government officials who gave me enormous insight into this subject. I had the great privilege of speaking with Ms. Rebecca Smoak, a Regional English Language Officer (RELO) in the U.S. Embassy of Rabat, as well as Mr. Michael McMillan, who is the Director of the American Language Center in the capital.

What was the most memorable part of your trip?

It’s difficult for me to single out a specific moment, for I have many. As a whole, I am enormously grateful for the guidance and support provided to me by my host parents, Hosni and Fouzia, and their son, Habib. It was through them that I experienced the finest forms of Moroccan hospitality. Moreover, I greatly enjoyed working with all my students, who were all incredibly eager to learn English.

In the future, I would love to pursue a career in the U.S. Foreign Service and the political arenas of Washington D.C.

In the past, I have traveled to England, Netherlands, Italy, and Spain.

I am interested in studying in Kuwait and hopefully Tajikistan, someday.

In addition to English, I speak both Spanish and Persian.

Omeed also had an article published in the online journal ProgressME.